60 years later, the doctor is out 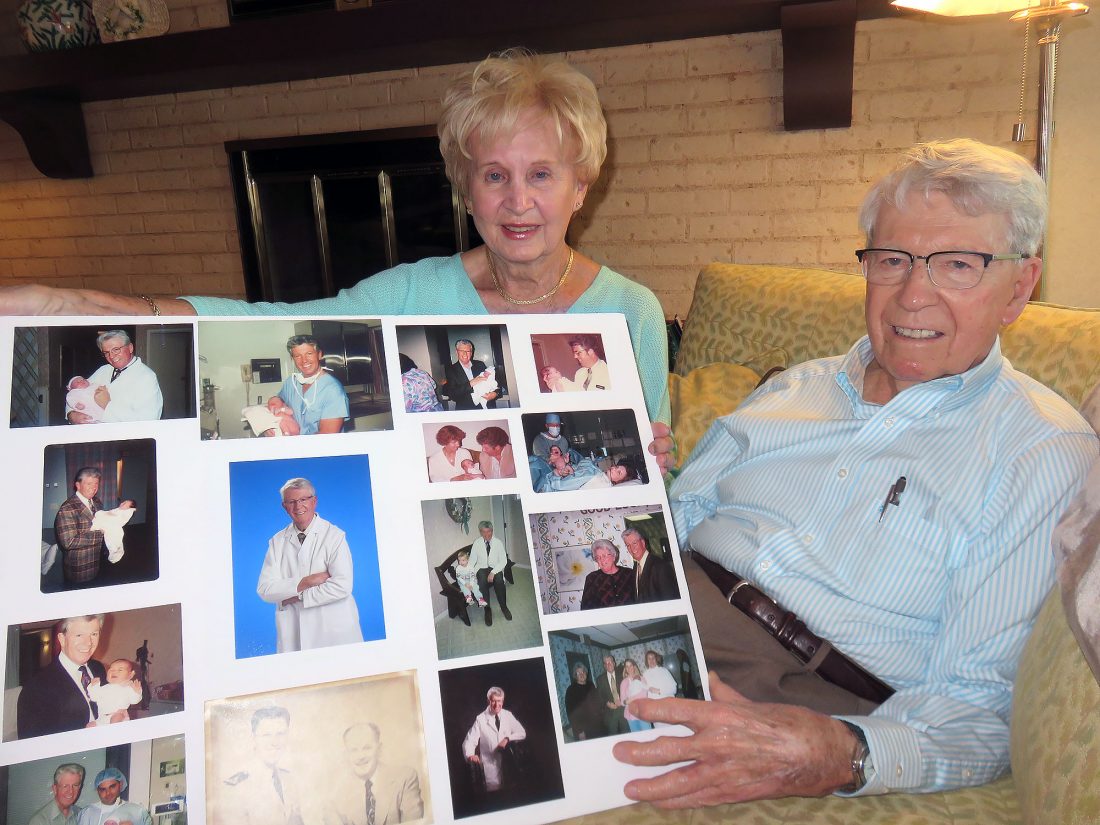 LOOKING BACK AND AHEAD — Dr. John W. Metcalf Jr. and his wife, Theresa, display one of several photo boards offering a glimpse of Metcalf’s medical career that began when he established his private practice in gynecology and obstetrics in Steubenville on July 1, 1959. Metcalf officially retired earlier this month after a 60-year career that included delivering more than 6,000 but fewer than 7,000 babies and enjoying the relationship he developed with patients. On his 90th birthday, the staff of Weirton Medical Center, current and past co-workers and his family surprised Metcalf with a combination birthday and retirement party in the hospital boardroom. WMC, which had been his home away from home since it purchased his private practice in 1999, presented Metcalf with a special plaque. -- Janice Kiaski

STEUBENVILLE — Dr. John W. Metcalf Jr. has been getting acclimated to a new schedule this month.

No more getting up and going to work — a radical change of habit given a 60-year career came to a close for the nonagenarian who began his private practice in gynecology and obstetrics in Steubenville on July 1, 1959.

It ended officially on July 3 in the Women’s Health Center at Weirton Medical Center where Metcalf wore his white lab coat one last time and saw his final patient.

And his new schedule?

“I’m going to get up in the morning and take a shower and shave, come down and eat breakfast and take my first nap,” Metcalf said, smiling softly during a recent conversation in his living room where career memorabilia and remnants from a surprise party were left to linger and savor.

The staff of Weirton Medical Center, current and past co-workers, and his family had surprised Metcalf on June 20, his 90th birthday, with a combination birthday and retirement party in the hospital boardroom. WMC had been his home away from home since it purchased his private practice in 1999.

The celebration included the presentation of a plaque that reads: “In recognition of decades of distinguished service in your community. Thank you, Dr. John Metcalf, for making WMC a better place!” It now joins other through-the-years acknowledgments on a table underneath a “Tree of Life” wall hanging that had been an office fixture.

“I put my lab coat on and found out I didn’t have any patients,” Metcalf said, recalling his actions in the moments before the party unfolded, a setting where Theresa had scurried to make photo boards for the occasion — “like he’s graduating from high school,” she said.

One of the boards bears photos showing Metcalf holding some of the thousands of babies he delivered; another is a photo of Metcalf with his father, the late John W. Metcalf, who operated a family practice in Jefferson County from 1922 until his death in 1960 and was his son’s inspiration for entering the medical field. And there are pictures of staff members, among them nurse Annie Wright, who worked with Metcalf for 38 years.

The festivities brought comments from Dr. Jasbir Singh Makar, cardiovascular disease and internal medicine specialist, who spoke about his longtime friendship and working relationship with Metcalf.

“Fifty-two years ago, July 1, 1967, I was lucky enough to meet this man,” Makar said. “I could have never asked for a better friend or teacher. There is no one with a more contagious smile or zeal and zest for helping others than this man.”

Makar shared a story of how he had only been in the area briefly and only flown three times in his life, when Metcalf offered to take him up in his personal plane to get an aerial view of the then-Ohio Valley Hospital where they both worked.

“There we were, up above the hospital, and he takes his hands off the controls and told me to fly the plane,” he said. “That is how he was. If he saw something in you, he trusted you. I did not fly that plane.”

Makar ended the story by noting that while he didn’t take control of the aircraft, he did take over when Metcalf would offer him the chance to assist or even finish a procedure in the operating room.

“May we all have a great career and full head of hair like you when we retire,” Makar added.

Sharon Evans was another co-worker celebrating Metcalf at the party.

“I was his nurse for 12 years,” she said. “I kept saying I was going to wait for him to retire first, but he held on too long. When I think of him the words ‘love,’ ‘respect’ and ‘admire’ are what come to mind.”

Williams said Metcalf called her and told her he wanted to start a place where low-income and uninsured women could get the health care they needed.

“He is what you want in a doctor,” she said. “He never said no to a patient that I asked him to see.”

Ann Quillen, former executive director of the Jefferson County Fourth Street Health Center, now the Ohio Valley Health Center, said Metcalf always treated any patient at the clinic with full respect and made sure they got a complete exam.

“He was always kind to the women, and they got the very best care he could give,” Quillen said of the free clinic where Metcalf had served as a volunteer until recently.

A Valley Life story noting Metcalf’s 50 years in practice bore the headline “The doctor is in … still.”

“Sixty years is a long time to work.”

That such longevity in one profession is a rarity, Metcalf noted, “Well, obviously I liked my job, and I liked to work, and I cut back down on the hard things — the deliveries I didn’t do after 2004 and then I stopped surgery shortly thereafter, so I have been doing just office work since.

Metcalf said he always wanted to be a doctor other than some fleeting thoughts as a boy of other options — a cowboy or a fireman, perhaps.

In high school, Metcalf knew he was destined to be a doctor.

“He told me he would go with his dad, who had a family practice, and they did house calls, so he’d get in the car and go with him, and if there were kids playing outside in the yard where his dad went to make the call, he’d get out and play with them,” Theresa interjected. “I thought that sounds like him. He loves to play.”

Doctoring was a serious pursuit, though.

Metcalf graduated from Toronto High School in 1947 and started college two weeks later at Kent State University, where he earned his bachelor of science degree and went on to the University of Maryland School of Medicine, his father’s alma mater. Metcalf earned his doctor of medicine degree in 1953 and entered the U.S. Navy, serving his internship in the U.S. Naval Hospital in San Diego.

He was assigned to duty with the Marine Corps in Japan and Korea during the waning years of the Korean conflict and was discharged with the rank of lieutenant commander.

He delivered more than a hundred babies during his internship before attending graduate school at Ohio State University where he completed his residency in obstetrics and gynecology, receiving a master of medical science degree.

He was certified by the American Board of Obstetrics and Gynecology in 1962.

He’d always envisioned himself returning to his hometown area to practice — a plan that prevailed.

He started his private practice in obstetrics and gynecology in Steubenville on July 1, 1959, in the downtown First National Bank building’s 11th floor and was on the medical staff of Ohio Valley Hospital, Gill Memorial Hospital and Weirton General Hospital. He was the first chairman of the obstetrics and gynecology department when St. John’s Hospital opened. He also served as chairman of that department at OVH and as president of the medical staff.

Fast forward 60 years, and blink, blink, the career is history.

“Taking care of people and the relationship I had with my patients,” he responds without hesitation.

Having treated generations of patients and delivered thousands of babies can be cause for amusing moments.

It’s not uncommon, for example, for the Metcalfs to be approached by a mother and grown child, with the mother noting, “Don’t you remember, Dr. Metcalf — he delivered you.”

Metcalf flips through the pages of a 15 cent notebook that documented births early on — one baby here, one baby there.

“It takes a while when you first start to get some patients,” he said.

He would bring new lives into the world up until 15 years ago.

“He really loved it, he did. It was fun,” Theresa said. “We’d be out at a social event or just out period, and he’d get a call and go to the delivery room, so I would go, too,” she said.

“At the old Ohio Valley, before it was Trinity, I could sit at the nurses’ station, and I could see him, and the back of the patient so I wasn’t invading on the patient’s privacy, and I could tell how much he enjoyed it. He looked so happy. It was just great to watch. I knew he loved it, and I loved watching him, and he was so good at it,” she said.

“And once in a while, if it was somebody I knew, I’d sit out in the waiting room with the grandparents or the parents or whoever. I knew he loved it, and it was just joyful, wasn’t it?” Theresa sought affirmation from her husband.

“When I’d go out in the middle of the night, she’d wake up when I had to leave, I’d go deliver a baby and come home, and she was still awake, and I fell asleep before she did,” Metcalf said.

“When you do obstetrics for a living, most of the time it’s a happy time. Occasionally you have a problem, and those are always sad, but you have to take the bitter with the sweet,” he said.

There have been many changes in health care in the past 60 years, according to Metcalf.

“Medicine is so different. When I started to practice, most people did not have insurance,” Metcalf said.

“It was between the patient and the doctor. You settled on a price, and they paid you the best way they could, and if they didn’t pay you, you ate it and went on to deliver the next baby,” he said.

“When I started my practice, it was $150 for global care, that included 9 months of prenatal care and six weeks and a 12-week check-up after. Then it went to about $2,500 maybe,” he said.

The Metcalfs are the parents of seven children; the great-grandparents of 26 — 20 of whom Metcalf delivered himself; and 19 great-great-grandchildren. Some medical influence made its way through the generations. Daughter Lisa, for example, is an orthopedic trauma surgeon. Granddaughter Molly is a pediatric nurse at Ruby Memorial.

Metcalf welcomes retirement with a tinge of emotion.

“I have a little sad feeling about it, but I think it’s time,” he said, grateful for the career he’s had and the memories it has fostered.

“If you’re lucky enough to find a job you really, really love, it’s not like going to work — it’s like going out to play,” he said.

“I enjoyed what I did, and I did what I enjoyed.”

(Kiaski can be contacted at jkiaski@heraldstaronline.com. Amy Neeley contributed to this story.)