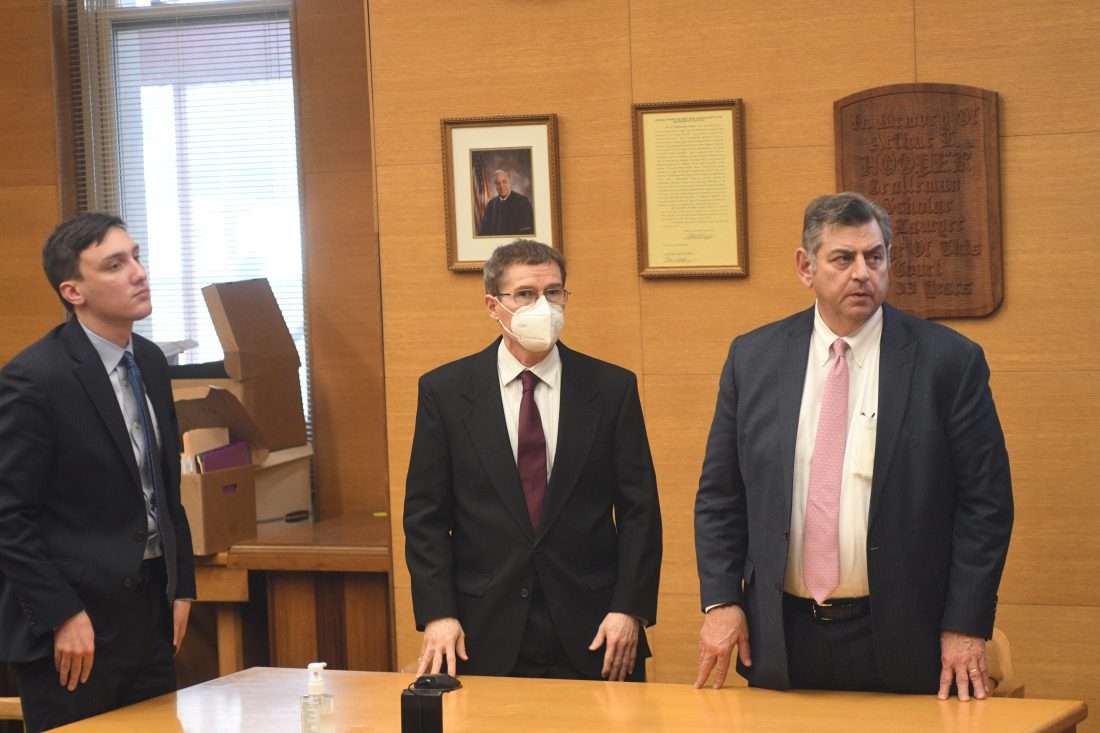 Michael D. McElwain PLEA ENTERED — The Rev. David Morrier, TOR, center, pleaded guilty Friday to the sexual battery of a woman he was supposed to be counseling from November 2010 to the spring of 2013. He’ll be on probation for five years and for the rest of his life must register as a sex offender. He was represented by Matthew Steratore, left, and Henry Hilow.

STEUBENVILLE — For 28 minutes, the woman who’d accused a Franciscan friar of subjecting her to years of sexual, psychological and spiritual abuse detailed the pain and betrayal she suffered at the hands of those she’d trusted to protect her.

The woman, who did not wish to be identified by name, said she had trusted David Morrier.

Morrier pleaded guilty to a single count of sexual battery on the woman he was supposed to be counseling. Prosecutor Jane Hanlin said the victim agreed to the plea deal because, “What she wanted from Day 1 was to be able to prevent him from hurting anyone else.”

But after listening to the victim’s tearful impact statement, a grim-faced Bruzzese told Morrier, 60, “That was the most powerful victim impact statement I have ever heard. You’re fortunate she agreed to this.”

With the plea agreement, Morrier will be on probation for five years and must register every 90 days for life as a sex offender. Until he can be turned over to Pennsylvania authorities, he’ll be living at a Granard Parkway residence under house arrest, complete with an ankle monitor.

The woman told the court it was in 2010, her senior year, that she finally felt safe enough to talk about the abuse she’d endured earlier in life, but said it very quickly turned into “a three-year nightmare of physical, emotional, psychological, spiritual, sacramental and sexual abuse.”

“Instead of being present, listening and providing support to me, my truth was woven into a dark narrative of Satanic ritual abuse that I was forced to accept under threat of his abandonment and through hours of gaslighting by him and by a ‘specialist’ I was taken off campus to see,” she said, her nine-page statement punctuated by sobs.

“I was guilted and shamed into agreeing to stay for graduate school at Franciscan University because, as he said to me on my graduation day, ‘If you don’t, it means that you are throwing away all of the energy and effort that I have put into caring for you. You need to stay to continue to receive the treatment you need.’ That treatment was not mental health treatment. Instead of receiving therapy to address my diagnosis of post-traumatic stress disorder, alcoholism and addiction, I endured upward of four-five deliverance sessions, lasting two to four hours for the entirety of summer of 2010 until I was told through ‘discernment by God’ that I was possessed by 36 demons. That is when the Major Rite Exorcisms started in September 2010. The only role therapy played was to keep my physically alive.”

While exorcisms and deliverances, where adult men would restrain her physically in a chair or on the floor while others would pray over her, telling her that her screams were the demons manifesting were being done in full view some in the college community, it was in the privacy of the Finnegan Fieldhouse basement where she said she was “forced to endure (Morrier’s) hands violating me because ‘this is what God revealed to (him) in prayer.'”

“Then it escalated to reliving the details of the sexual abuse” she’d endured in her early years “because (he said) that was how God revealed to him I would be healed,” she recalled. “That was ‘the only way’ and that this ‘method’ was revealed to him by the Holy Spirit in prayer … Saying no to him was rejecting the power of God and saying no to my salvation…

“He told me that there was healing power and grace in the sacraments, but he brought his own perverted desires into what should have been sacred encounters with God. Instead of receiving God’s forgiveness in confession, I was forced to relive the details of the very acts he committed against me, confessing them as if I was the one responsible for it all. Inside of the confessional, a place where an intimate encounter with God takes place, I was violated with his hands, his body and his abuse of his priestly authority in refusing to absolve me. The confessional became another place where my soul entered to die, over and over again.”

She told Bruzzese the friar violated the sanctity of the oratory and chapel “in order to ‘purify me’ and make me worthy to receive the Eucharist.”

The university banned Morrier from campus in 2014, and the woman said she was stunned to find out that while she had been “shamed, humiliated and coerced into silence” and “told repeatedly he was removed from public ministry, told that meant he could no longer act, be represented, dress as or be referred to or named as a priest in public,” Morrier had been treated to going away parties and tearful goodbyes, followed by a public celebration of his vows and ordination.

“Years of my life, my education, my mental stability, my financial security, my professional career, my chance at normalcy, my sense of safety, my development of trust again in the world and in others, my dignity, my worth and my character were repeatedly and actively stolen from me by a priest, a Catholic community and two institutions who were more concerned about hiding the truth and protecting themselves than protecting me,” she told Bruzzese, sobbing uncontrollably. “I left Franciscan University in August of 2016 terrified of the world, confused about the existence of God, questioning the intentions of every person coming into my life and believing that I was worthless in the eyes of God, the church and a community that I once had called home. It has taken a great deal of therapeutic work, with the on-going support of spiritual direction, to be able to even walk through the doors of a Catholic church again.”

The victim also told the court justice “did not come easy, or quickly, and came at an incredibly personal cost that works can never fully capture.”

“But the reason that I am able to stand here today, alive, and have the courage to speak is because of one simple moment — it was the moment someone looked at me and said, ‘I believe you.’ And that belief echoed. It echoed through each encounter with the Diocese of Steubenville who never hesitated to immediately do the right thing, to provide me with unwavering care, love and support throughout the criminal investigation from the very moment I came to them. It echoed through each encounter with every member of the team who worked to investigate the crimes that took place…

A Franciscan University of Steubenville spokeswoman could not be reached late Friday evening for comment, but a statement posted on the university’s website said, “We are sorry, saddened, and angered by the harm Father Morrier has caused. The university prays for peace and healing for the victim in this heartbreaking situation.”

“We are aware of the pain so many people have experienced from members in the church and continue to offer atonement and prayers of healing for those victims,” the university said, pointing out Morrier worked on campus from 2002 until the spring of 2013 when he was transferred to the Province headquarters in Loretto, Pa.

“Franciscan University was not aware of any claims of sexual impropriety at the time of his transfer,” the university maintained in its statement, adding the FUS Title IX Coordinator “was first notified of the sexual abuse allegations in 2015, after which the University met with the victim, advised her of her right to an investigation and resolution under the University’s Title IX policy, and offered to assist her in reporting to police. The University subsequently cooperated with the law enforcement investigation.”

“The university’s Title IX policies have improved over the years, and we have more resources than ever to deal with allegations of sexual misconduct. To remain vigilant and to help ensure that nothing like this can ever happen again, the university continues to evaluate and update our policies and resources going forward.”

The Diocese of Steubenville said it became aware of the case when the victim presented the allegations to its staff in November 2018.

Hanlin was pleased with the verdict, applauding the victim for having the courage to come forward in the face of withering attacks within the college community.

“She was told repeatedly it’s her fault, she’s not to be believed, she’s going to ruin his life, bring dishonor to the university,” Hanlin said. “She was completely alone.”

She referred to Morrier as a predator who looked for and found a victim he thought no one else would believe.

“I think he knew when he saw her, he would be able to convince her that this is what is right for her spiritually, that’s why the charge of sexual battery — he knew she had a whole host of problems before she came here, he just preyed on them,” she said.

She said her concern, and the victim’s, was that if the case had gone to trial, “if even one juror didn’t find him guilty beyond a reasonable doubt, he would go free, he wouldn’t have to register and they could continue to move him from place-to-place, and whenever the bad news catches up to him move him someplace else.”

“Above anything else, she wanted to eliminate any risk that they could simply move him and not have people know what he had done to her,” Hanlin said. “Her primary goal is to make sure he cannot hurt another young woman, that there’s a warning label on him…to prevent him from ever doing this again. I give her an unbelievable amount of credit for that.”

Hanlin said the investigation is continuing.

Meanwhile, after the hearing tears the tears flowed freely down the victim’s cheeks.

“I feel like for the last several years especially, my silence has equated to on some level protecting everybody and I just don’t want to protect anyone anymore,” she said. “Why protect them when they never wanted to protect me?”