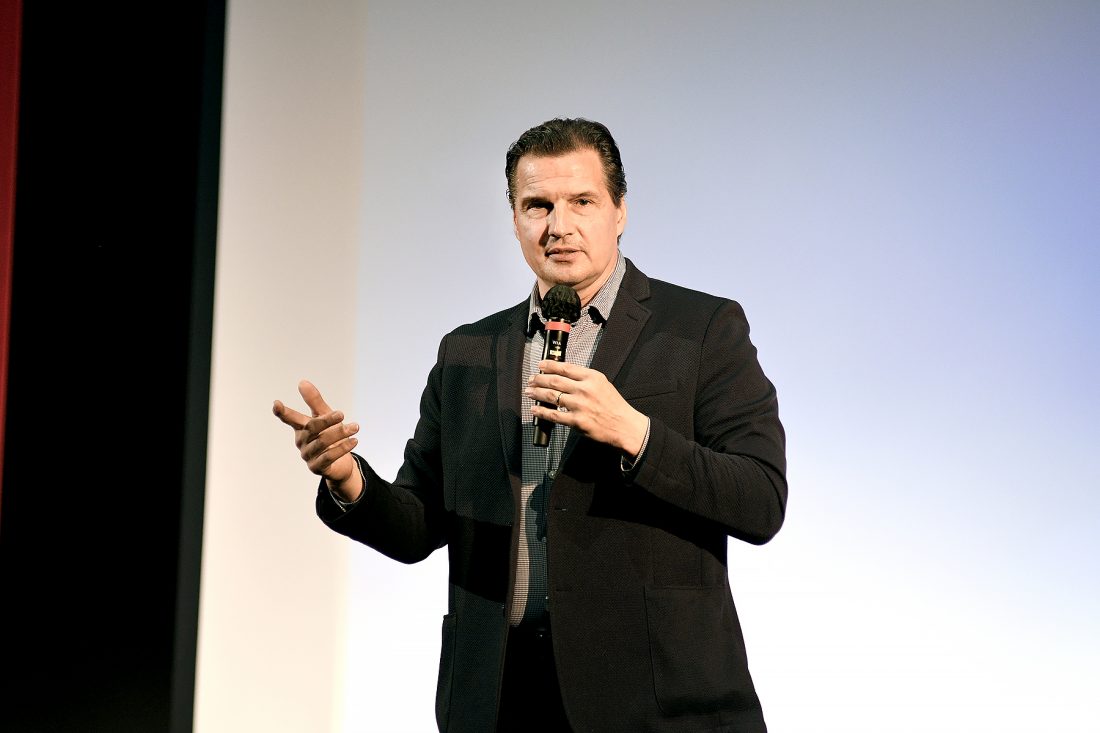 STEUBENVILLE — Eddie Olczyk has done a lot of things in his life — represented the U.S. in the Olympics, hoisted the Stanley Cup and beat cancer, to name a few.

Wednesday evening, the audience inside the Steubenville High School Auditorium got to hear about those things and more from Olczyk himself during the return of the Herald-Star Speaker Series presented by Eastern Gateway Community College.

Wednesday was the first Speaker Series event since Oct. 23, 2019. The SHS Auditorium was also the site of the series’ debut in 2012.

Olczyk played 16 seasons in the NHL, two of which were with the Penguins (1996-98), and spent parts of two seasons as the Penguins coach (2003-05) and three years as a broadcaster.

“(Pittsburgh is) a major league sports franchise with a small, hometown feel,” he said, speaking fondly of his time with the organization and working with Hall of Fame Broadcaster Mike Lange.

While those in attendance probably knew thar about Olczyk coming into the evening, he started by telling everyone something they probably didn’t — he has a connection to the area outside of his time in Pittsburgh.

His father-in-law, Tom Vickers, was born in Wheeling and grew up in Martins Ferry, the hometown of Olczyk’s mother-in-law.

Olczyk joked about Vickers’ reaction learning he was coming to Steubenville, making reference to trips to Steubenville Vickers made as a member of the Purple Riders basketball team in the late 1940s.

A re-occurring theme of Olczyk message, which coincides with his book, “Beating the Odds in Hockey and In Life,” was that things happen for a reason.

He told the story about how he met his wife during his rookie season with his hometown Chicago Blackhawks, when she was a flight attendant on one of the team’s flights, and his best friend, also during his time with Chicago.

“Everything I have I owe to the game of hockey,” he said.

Olczyk played for the 1984 U.S. Olympic Hockey Team, four years after the famed Miracle team, as a 16-year-old, and credited the 1980 team for opening the door for American players.

“All I ever wanted to do was play hockey,” he said.

He made light of the fact the 1984 team finished seventh, joking that is still “pretty good,” and about how many countries there are in the world before noting most didn’t send a hockey team to compete in the games.

The part of the presentation focused on the time after his career took a more serious tone as he discussed his battle with stage three colon cancer after his diagnosis in August of 2017.

“It was the greatest challenge put before me,” he said, adding chemotherapy “tests your will to live.”

A gut-wrenching conversation with his wife, Diana, at a tough moment during his treatment was recalled, and he gave credit to her, his family and friends for helping him get through the disease.

“If I was alone, I wouldn’t be here,” Olczyk said, encouraging members of the audience to reach out to people they know who are struggling for any reason.

He also said the purpose for speaking at events like Wednesday’s and for writing his book is to encourage others to take preventative steps that he did not, encourage those going through their own struggles and those that are caring for people in need.

Following his remarks, which lasted more than an hour, he answered questions from the audience and signed autographs. Prior to the event, at Froehlich’s Classic Corner, a VIP meet and greet was held.

Copies of Olczyk’s book were available for purchase at the Herald-Star during the lead up to the event and at the event itself, and a portion of the proceeds from the sale of the book as well as money generated from a basket auction that was held prior to the presentation will go to local cancer centers.

Area high school and junior high school students were able to attend the presentation at no charge, courtesy of the Wheeling Nailers.