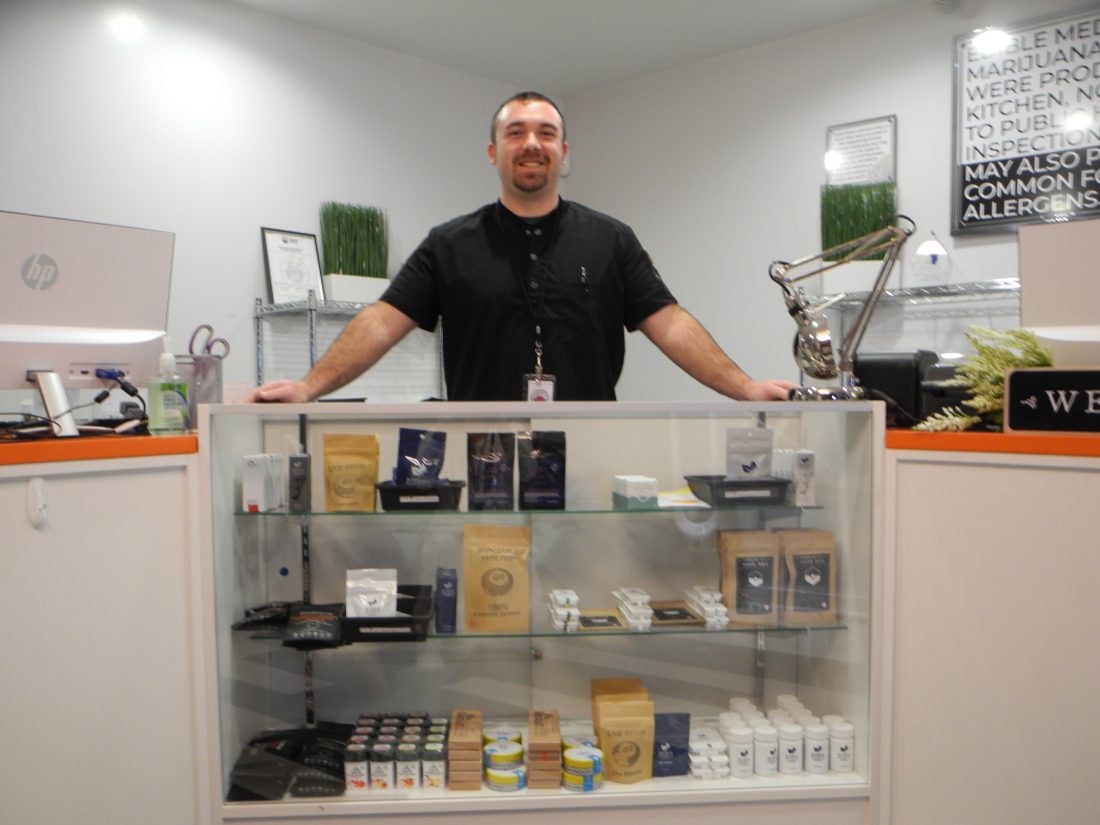 A YEAR OF GROWTH — Michael Petrella, owner and CEO of Ohio Valley Natural Relief in Wintersville, said he has seen his clientele steadily grow since opening the medical marijuana dispensary a year ago. The business was one of four to open their doors after receiving licenses from the state. (Contributed photo)

WINTERSVILLE — The owner of the first medical marijuana dispensary to open in Jefferson County – and one of the first four to open in the state ä reflected on the growth of his customer base on Thursday, the first anniversary of the business’ opening.

Michael Petrella, owner and chief executive officer of Ohio Valley Natural Relief, said the establishment has served hundreds of customers, an average of 20 to 30 per day, and he expects that number to double in the year ahead.

Petrella said most of his customers are between 55 and 65 years old “but we do have people of all ages,” with the oldest at 93 years.

Most suffer from cancer, fibromyalgia, post-traumatic stress disorder and chronic pain, he said.

They are among 21 conditions for which Ohio residents are able to seek a doctor’s recommendation to obtain the drug since the state Legislature approved marijuana for medical use last year.

As with other medical marijuana dispensaries, patrons of Ohio Valley Natural Relief, located on Canton Road, must present a state-issued patient registry card and government-issued photo identification, such as a driver’s license or passport, at the front window before they are admitted.

Once inside, they find a variety of marijuana products, including oils, tinctures, foods, patches and plant materials that can be vaporized but not smoked because smoking the drug is still illegal, Petrella noted.

Under state law, all of it must be produced in Ohio and tested by a state lab.

“Everything comes prepackaged in tamper-resistant materials and pre-tested,” Petrella said.

He said the product is cultivated and processed in many places throughout the state. Dispensaries are scattered throughout the state, with the largest number in Columbus, but he envisions many more opening as more residents learn the drug is an option for them.

Ohio’s dispensaries are not able to serve people outside the state because marijuana use remains illegal in many other states.

Currently 33 states, including West Virginia and Pennsylvania, permit medical marijuana use and 11 allow recreational use of it.

Petrella said before applying for a state license to operate the dispensary, he went to Colorado, where marijuana was legalized in 2014, to learn more about the field.

There he toured cultivation and processing sites and dozens of dispensaries, speaking to everyone from owners to security guards, he said.

“They were very friendly and helpful,” he said.

Petrella said the visits and the help of a team of attorneys and consultants helped him to prepare for the nearly 300-page application required for his license. The application process also requires a business plan, operation plan and patient care plan for each dispensary as well as a one-time $5,000 application fee and $70,000 operation fee that must be paid every two years.

Petrella said revenue from the latter is used to regulate the industry, including random inspections of dispensaries.

From 370 applicants, state officials selected Ohio Valley Natural Relief and 55 others to receive licenses. Chicago-based Cresco Labs also was granted a license to operate its own dispensary on Main Street Wintersville.

In July, Petrella was featured in the cover story of Marijuana Venture magazine as one of the first sole owners in the state, at age 26, to be licensed.

It isn’t the first business venture for Petrella, a Steubenville native who has run various enterprises with his brothers and also operates a lawn care business of his own.

Petrella said he was motivated to open the dispensary after his father was diagnosed with cancer in 2016 and doctors mentioned medical marijuana could offer some relief. But the drug was still illegal, and his father died two months later, he said.

Petrella said some come to the dispensary skeptical that it will help them, but word of mouth from satisfied customers has helped to bring many to his door.

“I encourage everyone to become educated before they decide whether they’re for or against medical marijuana,” he said.