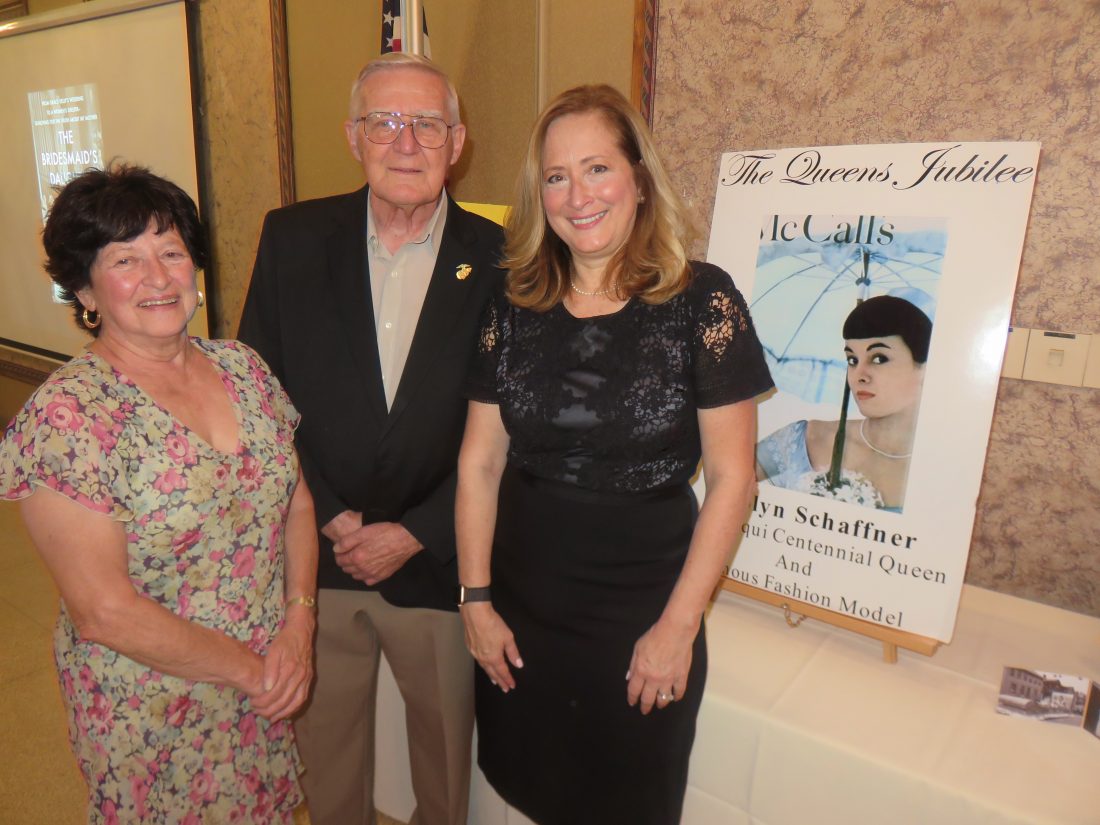 SPECIAL GUEST — Jefferson County Historical Association President Judy Brancazio, left, and Charlie Green, second vice president and museum director, welcomed Nyna Giles, author of “The Bridesmaid’s Daughter,” as the guest speaker at the association’s annual banquet meeting held Thursday at the Steubenville Country Club. Giles spoke about her mother, the late Steubenville native Carolyn Schaffner, who was Steubenville’s Sesquicentennial Queen in 1947; went on to become a famous model; was best friend and a bridesmaid in Grace Kelly’s royal wedding to the Prince of Monaco; and ultimately would spend later years in life in a homeless shelter with an undiagnosed mental illness before her death in 2007. (Photo by Janice Kiaski)

And she thanked the historical association for its important role in helping her research the life of her mother, the late Carolyn Schaffner, who was 18 when she reigned as Steubenville’s Sesquicentennial Queen in 1947 in celebration of the 150th anniversary of Steubenville’s founding.

Schaffner used prize money to move to the Barbizon Hotel in New York that November. She would become not only a famous Ford model through the mid-1950s but also the best friend of Grace Kelly, serving as a bridesmaid in her royal wedding to Prince Rainier of Monaco. Later in life, though, Schaffner spent years living in a homeless shelter, her mental illness undiagnosed, before her death in 2007.

Giles wrote “The Bridesmaid’s Daughter,” published in March 2018, an effort that brought local visits before and after. Giles had been on hand April 30 for the reopening of the main library downtown after a multi-million dollar upgrade.

Before that, she visited in February 2014 with co-author Eve Claxton for a key stop at the Jefferson County Historical Association Museum.

A captivated audience at the Steubenville Country Club listened to Giles’ story supplemented by a PowerPoint presentation of photos and even footage of the Sesquicentennial parade itself showing Schaffner — born Carolyn Scott — on a silver throne wearing a velvet cape.

“I am very grateful to Charlie Green for his help, and to the many people who shared their memories after my first trip here. I couldn’t have told my mother’s story without you,” said Giles, who growing up knew very little about her mother’s professional success.

“She had grown up on Pennsylvania Avenue. Her parents divorced when she was very young, her father moving to West Virginia and her mother staying here,” Giles said. “Her mother quickly remarried. Her grandmother had 10 children so she had a lot of family here in this area. They spent a lot of time at Grandpa Lewis’ farm which was not far from here. After she graduated from high school, she got a job at the Hub department store working in the children’s shoe department,” she continued.

“In 1947, Steubenville was celebrating the 150th year of its founding. The prettiest girl would be crowned Sesquicentennial Queen, and my mother won. As queen, she presided over all the Sesquicentennial activities, her crowning taking place at the local football stadium in front of a crowd of thousands,” she said. Offered either a Hollywood screen test or a cash prize, the 19-year-old Schnaffer took the money and moved to New York where she met a young, 18-year-old Grace Kelly.

“My book is my search to understand how this once glamorous woman fell so hard. It also goes into the impact a parent’s mental illness can have on a family.

“It has been an incredible journey, five years and more than 100 interviews, with family I never knew, the top mental health professionals and the likes of Tippi Hedren and Eileen Ford, who referred to her as a golden girl, one of the best junior models she ever had. From her home town here in Steubenville, New York City and ultimately to Monaco and the royal palace, I have retraced the footsteps of my mother’s entire life,” Giles explained.

“It was always important to me to connect with Steubenville which was such an important part of my mother’s past. It’s truly an honor to share my mother’s story with you and for me represents coming full circle in a five-year journey. I am so grateful to the city of Steubenville for making my mother Sesquicentennial Queen all those years ago. It gave her the chance to pursue her dreams as a model and perhaps the happiest years of her life,” Giles said.

Giles read an excerpt from her book about her 2014 visit to Steubenville, meeting with Charlie Green, the historical association museum’s director.

Green shared a number of files in the archives, saving for last information Giles had no knowledge of. It was two letters, one written in 1989 by then U.S. Rep. Douglas Applegate, D-Steubenville, to Steubenville’s mayor, both of whom had been Schaffner’s high school classmates.

“After the news broke that Carolyn Schaffner was living in a shelter, Doug had written to the mayor of New York, Ed Koch, asking for his help bringing Carolyn back to Steubenville. Mayor Koch had responded. It turned out that Koch had looked into the matter, but had learned that Carolyn had resisted all efforts to provide her with housing and that nothing further could be done,” she read. The attempt “to bring Steubenville’s queen back home” was dropped.

“I had no idea that the town’s representatives had written to the mayor of New York to ask for his help,” she read. “That they had tried to do this for her touched me more than I could explain to Charlie. She had been appreciated by her hometown in ways I had never imagined.”

Giles said she wrote the book “to tell my mother’s story, knowing that untreated mental illness was at the core. I wanted to uncover the truth, to really understand and appreciate what she went through in a way that I could share with the world. But in order to do that I also had to face what happened to me as a child, which has been very painful to relive, day after day, year after year.

“I kept searching for new insights, more information. But as hard as I tried to put the parts of my mother’s life back together, there were some pieces that didn’t fit. I knew that in order to fully understand her story, I needed to figure out the point at which my mother first began to show symptoms of her illness,” she said.

Her mother had been diagnosed with paranoid schizophrenia in her 50s, but Giles would come to learn it was postpartum psychosis, today considered temporary and treatable.

“Women with postpartum psychosis can experience depression, but also mania, confusion, paranoia, obsessive concern over the infant, hallucinations and delusions. But the delusions can take many forms,” Giles said. “Her delusions were related to my physical health. My mother took me to as many as 50 doctors in one year. Part of my story is my lack of formal education. In fact, I only attended 175 days of elementary school. The only full year of school I completed in my mother’s care was seventh grade.”

Giles said the book is her survivor’s story, too. She is “proud to say that, despite the profound effect my mother’s untreated mental illness had on my development and upbringing, I have had a really good life. I have been able to separate my mother from her illness. I feel nothing but love and compassion for her today.

“When my mother was in the armory in 1985, there were 10,000 in shelters in New York City. Now, there are more than 64,000. A large percentage of them mentally ill that the system has failed. They should not be invisible to us,” she said.

“This is what I know now. My mother was sick in her mind, not able to take care of herself and not able to make good decisions. She did not know she was sick and did not want treatment. The mental health laws prevent family members and doctors from treating people like my mother. By doing so the mental health laws are not helping people, and they are not protecting society. The legal standard for treating people is ‘dangerousness to self or others.’ It should be ‘need for treatment due to incapacity,'” she said.

“I wrote ‘The Bridesmaid’s Daughter’ with the intent of helping others,” Giles said, noting that when it comes to mental health, “we can all help by engaging in meaningful conversations, if you know anyone who may be struggling,” Giles said.

“Thank you for giving me this opportunity to bring Steubenville’s queen home again,” she said in her closing remark.

Giles was introduced by Thom Way, a member of the board of directors who served as master of ceremonies.

Treasurer Dennis Milko said the historical association has several projects in mind, including having groups meet and have luncheons in the museum dining room, which already has happened. He noted the Steubenville Woman’s Club, for example, will have its Oct. 7 meeting there.

Expanding parking is a goal.

“Our parking lot is not very big,” he said of the current space that accommodates four or five cars. The next door lot was purchased last summer and an estimate obtained to have it paved.

Another project, Milko said, involves making the president’s room the war room given the larger space can accommodate the increased donations, for instance, of World War II and Vietnam War items the museum has received.

Acquiring a new heating and cooling system for the building constitutes another wish-list item.

“Things go slow sometimes, but we do move forward, and we do the best we can down there,” Milko said.

For information on joining the historical association or visiting the museum at 426 Franklin Ave., call (740) 283-1133 or go to jeffcountyhistorical.org.