A not so ghostly tale of the library ghost 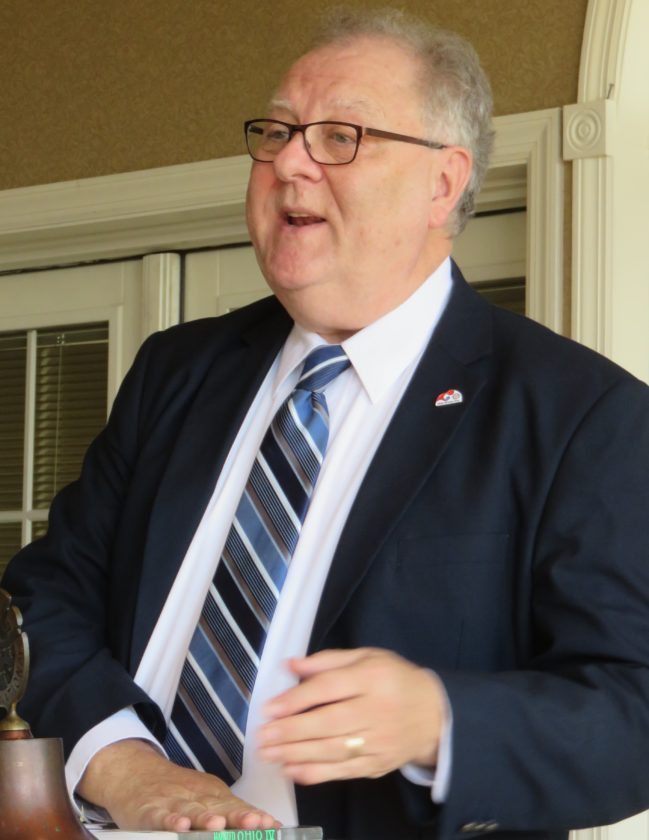 SPOOKY STUFF — Alan Hall, director of the Public Library of Steubenville and Jefferson County, shared the story of the library ghost to members and guests on hand at the October meeting of the OFWC/Woman’s Club of Steubenville. -- Janice Kiaski

STEUBENVILLE — GFWC/OFWC Woman’s Club of Steubenville members will welcome Mark Nelson, president of the Steubenville Revitalization Group and Nelson Fine Art and Gifts, as the guest speaker at its Nov. 7 noon luncheon meeting at the Steubenville Country Club.

The board will meet in executive session prior to that, beginning at 11 a.m.

Jane Agresta and Eileen Krupinski will serve as greeters and hostesses.

While “Steubenville on the Move” will be the focus of the November meeting, it was all things Halloween when the club held its October meeting, welcoming Alan Hall, director of the Public Library of Steubenville and Jefferson County as the main attraction. He was introduced by Krupinski, program chair.

Make a spooky scary noise here. Or not.

Hall said the library doesn’t make a point to promote “the library ghost,” which some people might think exists while others don’t.

“We kind of view this as an irritation, because people come in, and you know, you can tell if they’re looking for the library ghost,” said Hall, who was to have had an October presentation on Ohio ghosts for the Academy of Lifelong Learning. “They walk in and stare up at the chandeliers and look at the ceiling and kind of walk around in circles, and you think, oh, somebody from out of town has heard about the library ghost.”

The story comes up, given it’s a subject posted and reposted on the Internet, and Hall has mentioned it once or twice in his weekly columns that appear in the Sunday edition of the Herald-Star.

“I let everybody decide for themselves whether the library ghost is real or not,” Hall said, electing to broach the subject of how the ghost came to be.

“It’s my fault, and I can actually document I caused this ghost to be known, and it goes back to when I first came to the library in 1983,” he began, noting he was being shown around the library system as he was coming on board as its new director.

Somebody asked Hall if he’d been up in the attic of the main library yet.

“It never occurred to me that there was one,” he admitted.

But it was a place he made a point to check out, heading up a spiral staircase to the tower room where the very first librarian of the early 1900s briefly had her office — all 31 steps to get to it.

The door to the attic had a little poster that read home of the library ghost.

“When I came back down from the attic, I said to the staff at the time, ‘So, there’s a ghost in the attic?’ and they chuckled and said, ‘Well, we like to think there is.'”

Not a ghost floating around that anyone could point a finger at, mind you, but somebody thought that in 1924 a custodian had died in the attic so maybe that was it.

“In my first four to five years here, I kept waiting for the library ghost to come to me, and I’m sorry it never did, but others would say it did, and we talked about the dead custodian,” Hall continued.

Hall started doing research on past library directors, the first head librarian being Ellen Summers Wilson in 1902. Records didn’t offer much, so Hall dug to learn more, discovering that she had graduated from the state University of New York at Albany, the Melville Dewey Library School. Dewey as in the father of modern librarianship.

Wilson’s first job was with the Carnegie Library of Pittsburgh. She was at two of its branches before being hired in the summer of 1901 as the first librarian of what was then the Carnegie Library of Steubenville. She was hired to gather together books, according to Hall. “The trouble was Carnegie provided money for building, but not for the books or the operation, so she was scrounging around trying to find books, and a couple libraries had been in Steubenville and had gone out of business, and those boxed-up books she brought to the office downtown,” he said. She patched up the books as best she could so the library would have some kind of an initial inventory.

Wilson was “a very fascinating person,” according to Hall. She started the boys club, the girls club and civic league, all with the intention that they would foster a love of reading.

But she was not without an element of controversy. “She had business cards produced with the library because the library was very ahead of its time. It had a telephone, and so she had the telephone number put on these business cards, and she went down the hill and stood at the mill gates and passed out her business card in 1902. Unheard of,” Hall said with animation.

“And she was a single woman, and she stood there as all these men came out of the mill and said, ‘Here’s my card.'”

At the next library board meeting, it was thought that Wilson perhaps may not have exercised the best discretion, according to Hall, who also learned from his research that she had been a presenter at the Ohio Library Association meeting held in Cleveland in 1902.

Then her story turns sad, he said. In August 1904, Wilson contracted tuberculosis and died that November at the age of 31.

Up to that point, Hall had figured her as the old stereotypical librarian, complete with glasses on a necklace chain and her hair up in a bun, a pencil poked through it for handy access.

Not long after his research, Hall recalled how an angry patron had come to the library, upset that her credit had been adversely impacted because she had neglected to return several videocassettes she checked out from the library. She couldn’t buy the washer and dryer she needed.

“She stormed in the library mad as a wet hen,” said Hall, who was summoned to talk with her after she’d initially confronted other library staffers.

Hall said when he asked the woman if he could help her, she was pleasant and said she was there to pay her fine.

“The whole staff was in awe, because this woman had just read them the riot act, but I just had the sense that right behind her was Ellen Summers Wilson ready to clobber her if she didn’t pay her fine,” Hall said.

In 1991, Hall, in his capacity as the president of the Ohio Library Association, was attending a regional meeting where the speaker was Chris Woodyard, author in the “Haunted Ohio” series. The two talked about the library ghost, which ultimately ended up as a story in the series a few years later.

That and Internet exposure attracted visitors to the library, there to gaze at the ceiling and ask ghost questions, he said.

It also promoted an interest among people wanting to do “investigations,” according to Hall, a request largely ignored until a library conference was occasion to meet James A. Willis, author of “Ohio’s Historic Haunts.” Willis was the program speaker and asked Hall if he could use instruments to check out the library for a paranormal presence.

Hall said a team with Ghosts of Ohio Inc. out of Columbus did come to the library with equipment and recording devices and all and boxes of toys, too, the latter apparently because “Ghosts like to move toys around even if they’re adults.”

The overnight episode brought a report about two weeks later.

“They could not prove there was any ghost in our library, but he (Willis) was so fascinated by it that we’re a chapter in his book,” Hall told the club.

What Hall liked the most about the chapter were the final thoughts of Willis, who wrote that he could never understand why libraries aren’t always standing room only, given all the free things they offer.

Hall read what Willis wrote, that “for whatever reason, libraries seem to remain one of Ohio’s best-kept secrets. But it’s a secret that the ghosts of the Public Library of Steubenville and Jefferson County are trying to let people in on. They’re trying to lure people in with ghostly tales and then keep them coming back for more when they realize all the cool stuff waiting for them inside. Perhaps Alan Hall said it best when he told me, ‘I’m hoping when people come for the ghosts, they stay for the books.'”

Iris Craig, president, presided for the business meeting where reports were given by Judy Brancazio, recording secretary, and Roxanne Matysiak, treasurer. Beth Rupert-Warren offered the reading and blessing. Marge Bedortha and Eleanor Weiss were greeters and hostesses.

Craig reminded members to bring to the November and December meetings toiletry and personal care items for teen boys and girls that will be made into teen stockings Urban Mission Ministries will distribute for Christmas. 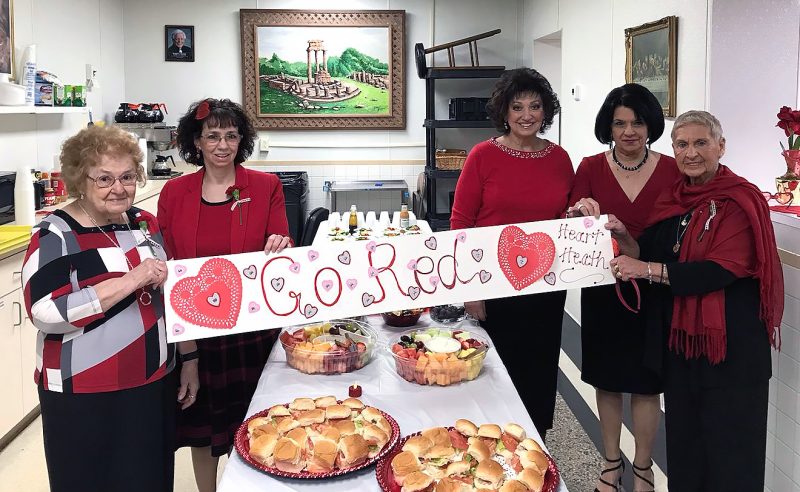 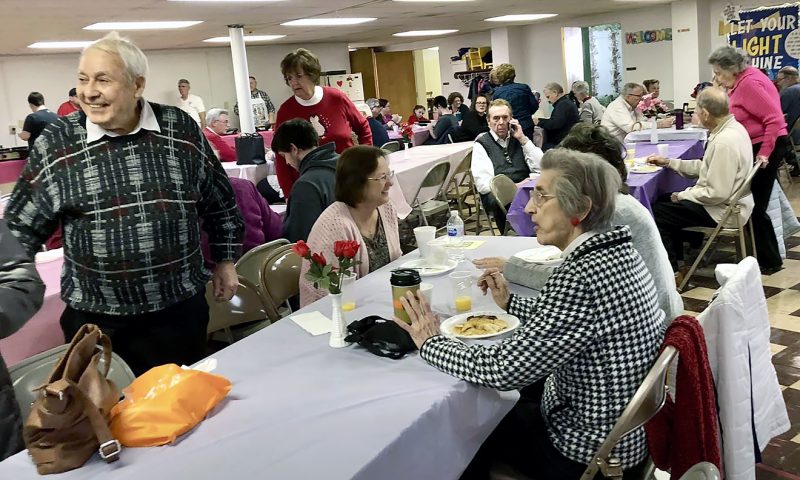 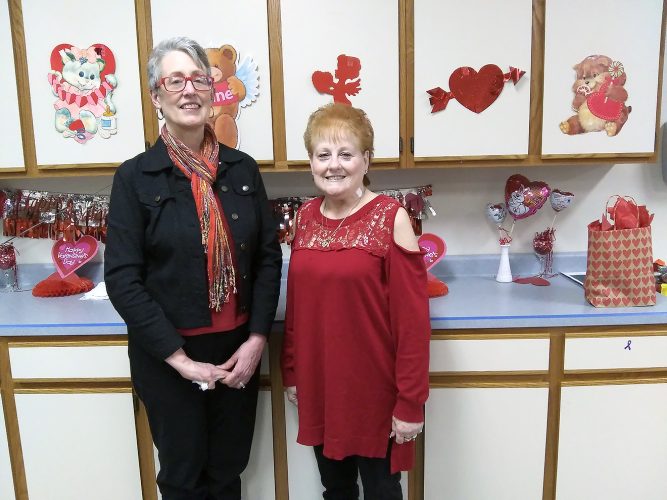