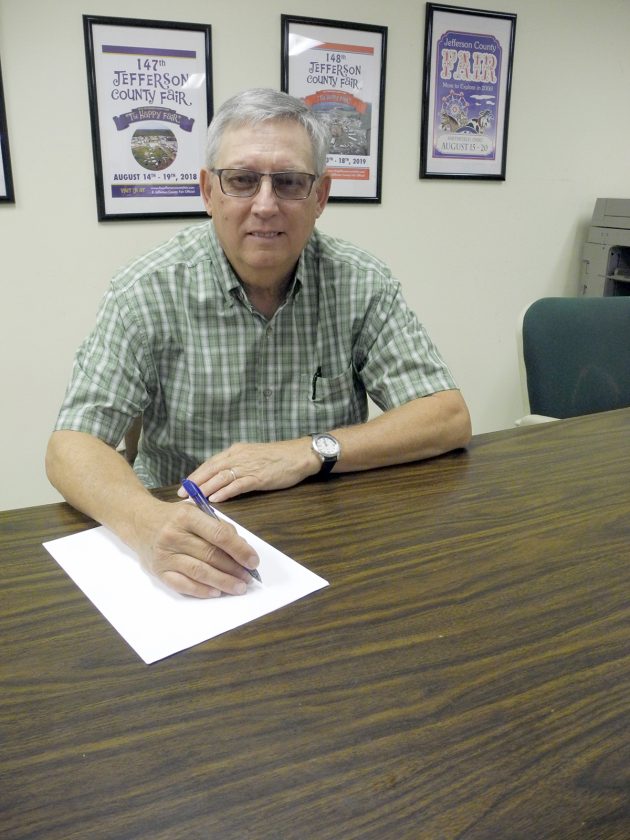 SMITHFIELD — Enjoying what is accomplished in life each day is a wonderful plus, and Robert “Rob” Whinnery employed that thought during his 29 years and four months with the Farm Service Agency.

During the time that his wife, Vicky, has served as the Jefferson County Junior Fair coordinator, Rob has been a presenter at the crowning of the fair royalty, handing out certificates of honor to the royalty from the Farm Service Agency and a monetary gift from the Whinnerys. He could be seen all around the immense grounds at Friendship Park while running errands.

His mother, Kay Whinnery, was with the Harrison County Agriculture Society and 4-H for many years.

His career started in Trumbull County, where he was employed for four years in farm service. In 1994, he came to Hopedale where the FSA was only involved in Harrison County at the time. In 1995, it combined with Jefferson County in a new building.

“The Hopedale office employs and implements the Farm Bill side and I saw to it that producers got paid. Farmers once had to come to the office for farming assistance, but now with computers, they can go on line and do most of it,” he said.

The Whinnerys have two daughters who were active in the Windy Ridge Club 4-H. Katherine, their youngest, was crowned the Ohio Fair Queen several years ago. She earned a degree in animal science at Ohio State Univeristy, is studying veterinary public health and plans to go to veterinarian school.

Laura is employed at the James Cancer Hospital in Columbus.

Born and raised on a dairy farm in southern Jefferson County, he is still farming with 60 ewes and 20 cows in Harrison County. He was in the Stick with It 4-H Club in his youth.

The following real estate transactions were recorded in Jefferson County: William Demjan to Andrew and Sara ...

NAMED: Tiffany McKitrick has joined the Cedar One Realty team and will be working out of the Wintersville ...

A government advisory committee has concluded that federal regulators followed established procedures when they ...

LORDSTOWN — General Motors picked a 158-acre site in Lordstown for a new battery-cell manufacturing plant because ...

STEUBENVILLE — The Laurels of Steubenville, a skilled nursing and rehabilitation center operated by Laurel Health ...

STEUBENVILLE — Beginning this fall, Franciscan University of Steubenville will offer a bachelor of science ...