Reporters from across the region wait across from the Jefferson County Courthouse at Market and Court streets in downtown Steubenville today while the investigation continues into the shooting of Jefferson County Common Pleas Judge Joseph Bruzzese. — Mark Law 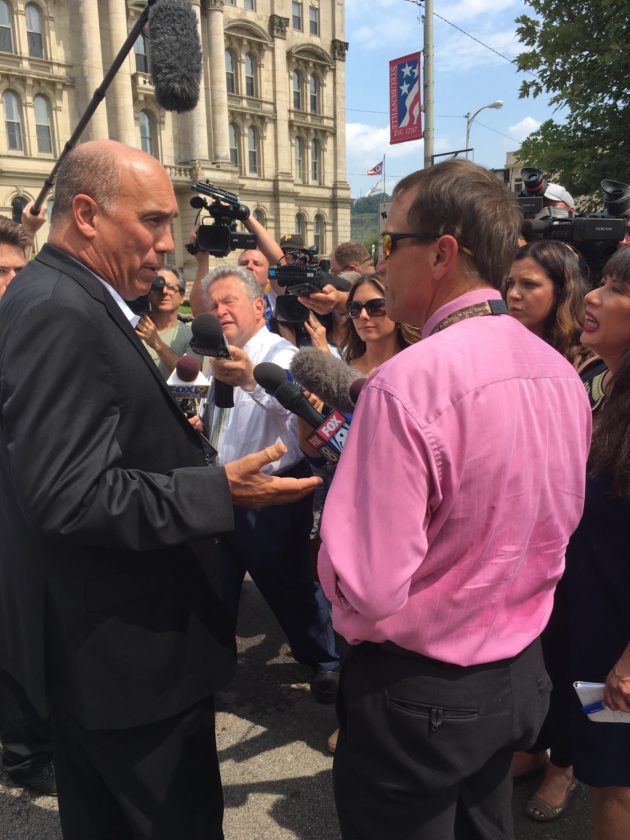 STEUBENVILLE — Jefferson County Common Pleas Judge Joseph Bruzzese is out of surgery and “doing fine” at UPMC in Pittsburgh, according to City Manager Jim Mavromatis.

Bruzzese was shot in an ambush-style attack outside the Jefferson County Courthouse on his way into his office Monday morning.

County officials said the courthouse, which was closed today as the investigation progresses, will remain closed Tuesday.

Mavromatis said the family of the shooter, who was shot and killed by a probation officer who happened upon the exchange of gunfire between the shooter and the judge, has been notified.

The name of the shooter is expected to be released to reporters later today. 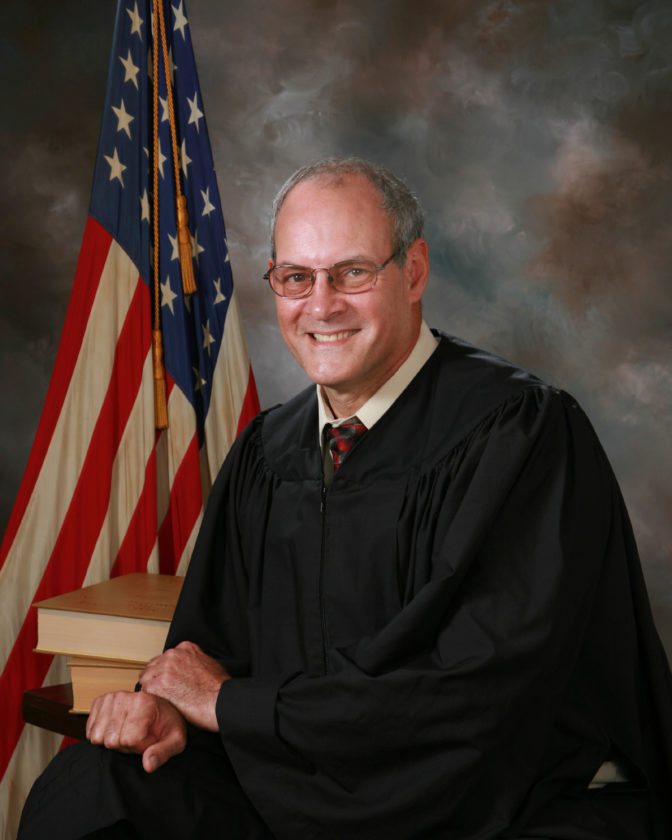 An at-times emotional Sheriff Fred Abdalla spoke with reporters at about 11:15 a.m. and said authorities are still trying to establish a motive.

The shooter exchanged gunfire with Bruzzese near the Court Street entrance to the courthouse, Abdalla said, and was shot and killed by a common pleas court probation officer who was walking in Dollar Alley between buildings from Fourth Street to Court Street when the shooter turned on him.

Mavromatis said the suspect apparently backed into another car in an attempt to escape.

Bruzzese was walking from Fourth Street through the narrow alley toward the courthouse when he was “ambushed,” Mavromatis said.

“Whoever thought this could happen here,” Abdalla said. He noted local authorities are familiar with the suspect. 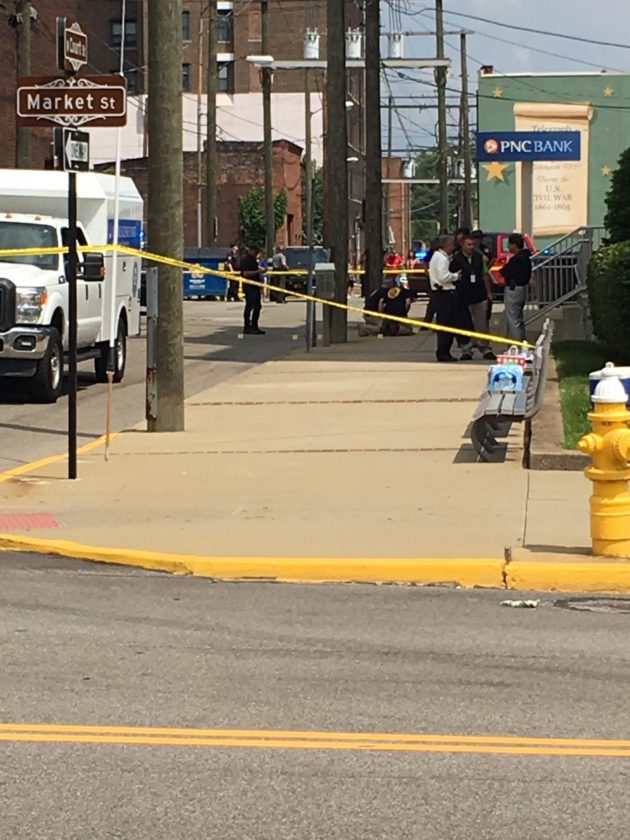 Investigators from the Ohio Bureau of Criminal Investigation work outside the Jefferson County Courthouse along Court Street, where Common Pleas Judge Joseph J. Bruzzese was shot this morning. — Mark Law.

He said the shooter and Bruzzese appeared to have exchanged about five shots each, according to courthouse video.

He said officers are checking court records to see what involvement the suspect had with Bruzzese.

The FBI has joined the Ohio Bureau of Criminal Investigation, the Ohio State Highway Patrol, Steubenville police and the Jefferson County Sheriff’s Department in the investigation.

Abdalla said he is aware of threats being made in retaliation for killing of the shooting suspect.

“Police in the region have been notified,” he said. “I hope nothing like that happens. If it does, we are prepared to handle it.” 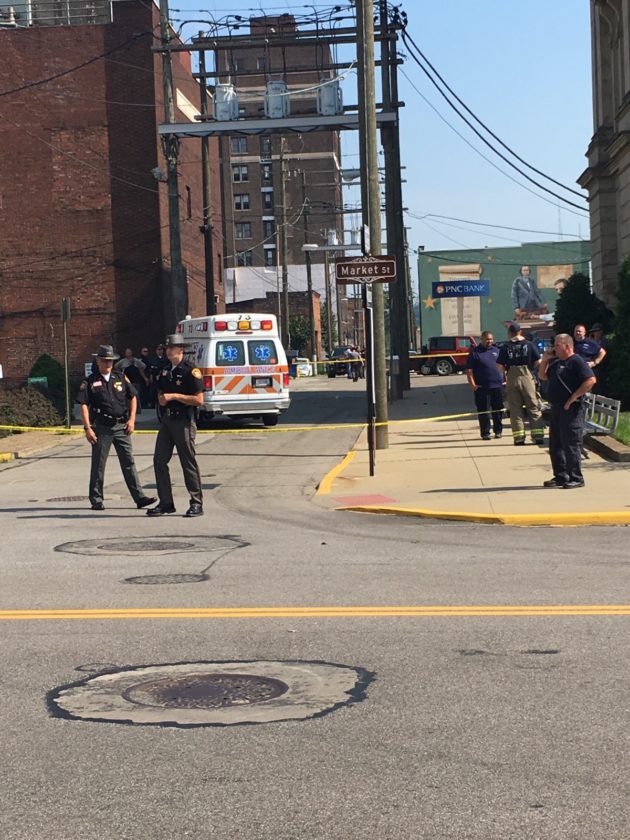 Jefferson County Sheriff's Department deputies, Steubenville Police and other investigators work on the Court Street side of the Jefferson County Courthouse in downtown Steubenville today following an ambush-style shooting of Judge Joseph J. Bruzzese. The judge has been taken by medical helicopter to a Pittsburgh hospital. One suspect is dead and another is in custody. — Mark Law

Mavromatis cautioned people not to accept inaccurate information being shared on Facebook.

The crime scene remained surrounded by police tape hours after the shooting.

Mavromatis said, “This isn’t TV. We don’t do it in 30 minutes. There is evidence all over the place.”

A man who was in the car with the shooter was grazed by a bullet and was taken to Trinity Medical Center West. He told law enforcement interviewers he had been unaware of what was happening. Abdalla said that man and the shooting suspect had been drinking last night when the suspect said he had to be in court early today. 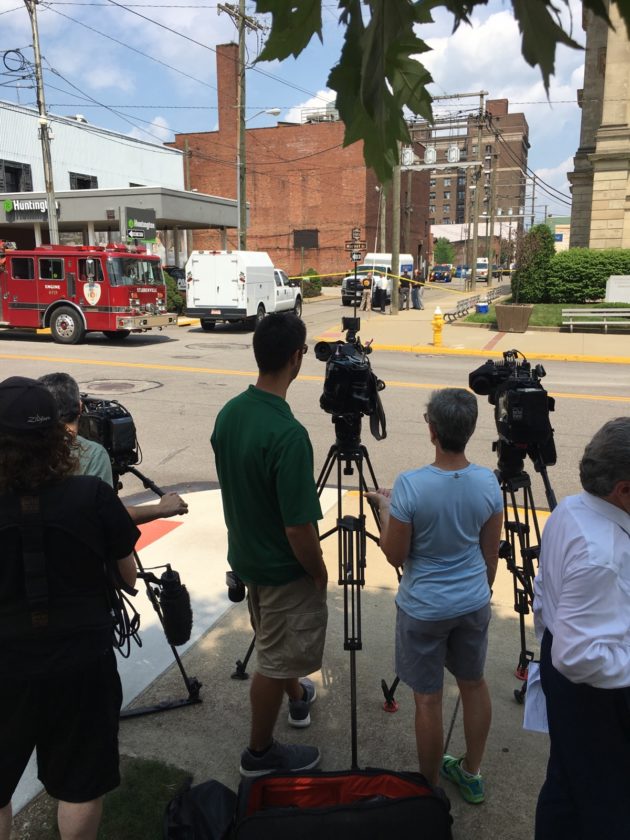 Reporters from across the region wait across from the Jefferson County Courthouse at Market and Court streets in downtown Steubenville today while the investigation continues into the shooting of Jefferson County Common Pleas Judge Joseph Bruzzese. — Mark Law

Abdalla became emotional and said, “The judge was shot in front of the courthouse and it affects me. It is an attempted murder on a judge.”

Later today, he said, “Every judge should be armed today in America. Prosecutors need to be armed. It was a cold-blooded attempted murder on a judge.”

Abdalla noted Bruzzese is an avid sportsman and hunter, which helped fight off the attack.

“If any judge could do it, it is him,” he commented. “There are so many nuts running around seeking retaliation.”

Abdalla said, the quick action of the probation officer made the difference.

“If the probation officer was not there, the shooter would have kept shooting until the judge was dead,” Abdalla said.

County Commissioner Thomas Graham said the county would have counselors available from Coleman Professional Services for employees who need counseling when the courthouse reopens Wednesday.

Graham said the commissioners will be talking about security issues during the board’s meeting on Thursday.

“We’ll talk with the sheriff and get his input on what we need,” Graham said.

The courthouse has cameras inside and outside the building, a metal detector at the only open public entrance and three deputies on the inside.

Graham noted county officials are vulnerable on the outside of the building.

“Nothing can guarantee you against a random act of violence. My concern now is for the safety of workers and my thoughts and prayers go out to the judge and his family,” Graham said.

The local legal community has been shaken by the shooting.

Attorney Eric Reszke commented, “It was an assassination attempt like something you’d see in South America. They crossed the line on this. Attorneys, judges and police officers never were targets in this manner. That has changed today.

“Nobody should have to wake up and see this. The courthouse is one place where arguments are supposed to be settled, with violence never being involved,” he continued. “That has changed forever.”

Bruzzese has been an attorney since 1976, when he graduated from Ohio Northern University. He was the county court judge at Wintersville for many years before being elected to replace longtime common pleas judge Domenick Olivito in 1995. Bruzzese won re-election to his latest term in 2014.

“Fran and I are praying for Judge Bruzzese and his family at this difficult time,” DeWine said in a statement.

U.S. Rep. Bill Johnson, R-Marietta, said, “I was very saddened and alarmed to hear that Judge Bruzzese was ambushed and shot outside the Jefferson County Courthouse earlier this morning. I’ve worked with him on issues surrounding the Jefferson Metropolitan Housing Authority, and I know he is committed to the people he serves.

“From the shootings at the congressional baseball practice, to today’s tragic shooting, public officials are increasingly under assault. Public service shouldn’t be a dangerous occupation, but it all too often is. I’ll be praying for Judge Bruzzese’s recovery.”

Ohio State Bar Association President Randall Comer said, “We were shocked and saddened by the news that Judge Joseph Bruzzese Jr. was shot and injured outside of the Jefferson County Courthouse. As we await news of Judge Bruzzese’s condition, our thoughts and prayers are with his family and the medical professionals attending to his injuries.”

Ohio Chief Justice Maureen O’Connor said, “The attempt on Judge Bruzzese’s life in a cowardly ambush reminds us all of the very real potential for violence against judges. Violence against judges represents an attack on the Rule of Law, the foundation of our country. I urge all court employees, especially judges, to take extra precautions both in your personal and professional activities. The entire judiciary stands with judge Bruzzese and his family as they remain in our prayers.”

Sen. Sherrod Brown, D-Ohio, said, “Connie and I are thinking of Judge Bruzzese and his family and we pray for his recovery. I join all Ohioans in expressing my gratitude for local law enforcement who responded. My office will support local authorities and the state as they investigate this senseless act.”

Lieutenant Gov. Mary Taylor said in tweet, “My prayers are with Jefferson County Judge Joseph Bruzese and his family. Thankful for the quick actions by Steubenville law enforcement.” 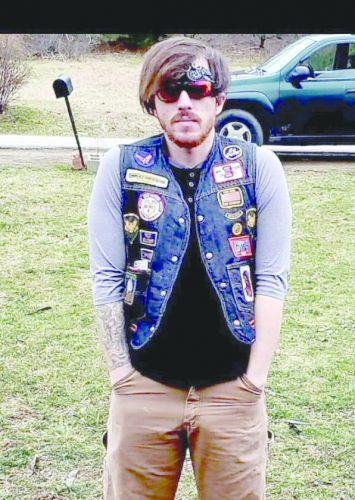 Search on for missing man

Energy cost help may be available COLUMBUS — To aid residents affected by the coronavirus, the Ohio Development ...

CADIZ — A midday shooting in Cadiz left one injured and both the suspect and the victim behind bars. Charles ...

STEUBENVILLE — Former city patrolman Salvatore Scarafile has had another brush with the law, this time in ...

STEUBENVILLE — Eastern Gateway Community College students will continue to learn online, at least for the ...

We shouldn’t have been surprised