History made at PNC Park as Jaso hits for the cycle 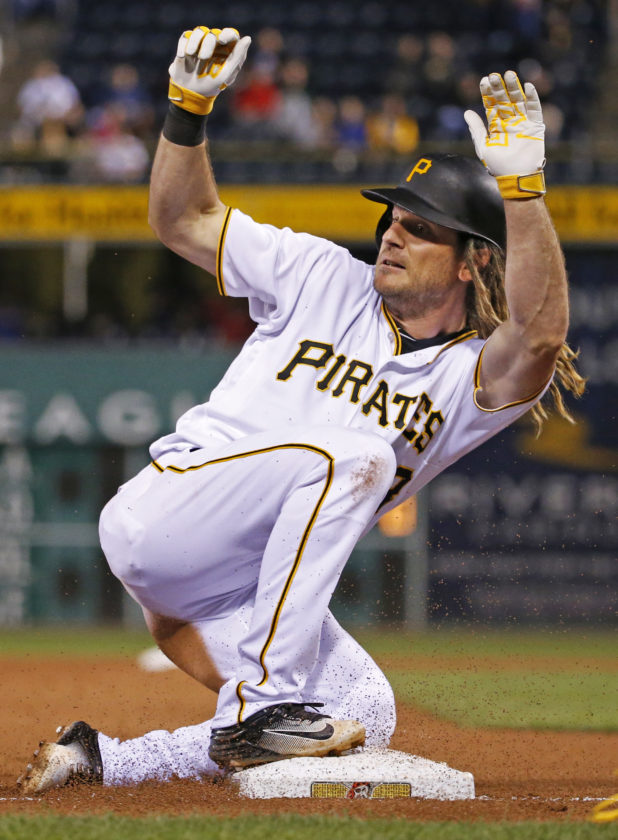 Pittsburgh Pirates' John Jaso, right, slides safely into third with a triple in the seventh inning of a baseball game against the Chicago Cubs in Pittsburgh, Wednesday, Sept. 28, 2016. A run scored on the hit. (AP Photo/Gene J. Puskar)

PITTSBURGH — Coming around second base in the seventh inning of the Pittsburgh Pirates’ 8-4 victory over the Chicago Cubs on Wednesday night, John Jaso stumbled.

Then, he went for it.

Ninety feet later, Jaso was safe at third base with a triple to become the first player to hit a cycle in the 16-year history of PNC Park.

The triple off reliever Pedro Strop clinched the Pirates’ first cycle since 2004. The last Pirate to hit for the cycle was Daryle Ward on May 26, 2004, in St. Louis. The last Pirates’ home cycle was by Jason Kendall on May 19, 2000, against the Cardinals at Three Rivers Stadium.

Jaso isn’t exactly a typical candidate for the cycle. He has neither prodigious power nor speed, as he hit just his seventh home run and third triple of the season. Jaso didn’t even realize what had happened until he had already performed the feat.

“It didn’t really dawn on me until I was standing on the base,” he said. “I was looking at (third base coach Rick) Sofield and it finally just hit me.”

Jaso’s teammates were well aware of what was going on. Shortstop Jordy Mercer said they didn’t want to jinx it by telling him.

“There was a little buzz going on and we were aware of the situation, but I don’t think it’s something you want to openly talk about when they have one more at-bat left,” Mercer said.

But when Jaso looked like he might settle for a double after rounding second, Mercer and the rest of the bench became a legion of third-base coaches.

“We were just yelling, ‘Keep going! Keep going no matter what, just go,'” Mercer said. “It worked out. I couldn’t be more happy for him. It was awesome.”

Against Chicago starter Jake Arrieta (18-8), Jaso singled in the second inning, hit a three-run home run in the fourth and doubled in the fifth. Arrieta went five innings and allowed 10 hits and seven runs, both season highs.

“It’s just a great memory to have,” Jaso said. “You don’t really want to take this blessing for granted being here.”

Chicago’s Anthony Rizzo hit a solo homer, his 32nd of the season.

Cubs: OF Chris Coghlan left the game with a mild left ankle sprain. He ran into the wall in left field attempting to catch a fly ball in the fifth inning. . Manager Joe Maddon expects OF Jorge Soler (right side) to be able to play this weekend.

Pirates: After being officially eliminated from the playoffs Tuesday, the Pirates will shut injured reliever Neftali Feliz down for the season, and will be “backing away” from C Francisco Cervelli, according to manager Clint Hurdle. Cervelli had hamate surgery in July and has dealt with several minor injuries all year. . OF Gregory Polanco did not play with a stiff neck. He had previously missed three games with a facial contusion following a collision with the wall in left field.

Pirates: Ivan Nova (12-8, 4.37 ERA) has lost two straight starts after winning his first five decisions with the Pirates since coming over from the New York Yankees at the trade deadline.

He has given up 11 runs (nine earned) and 18 hits over seven innings in his last two starts.

PITTSBURGH — Adam Frazier is making the most of his chance as Pittsburgh’s new left fielder. Frazier had a ...