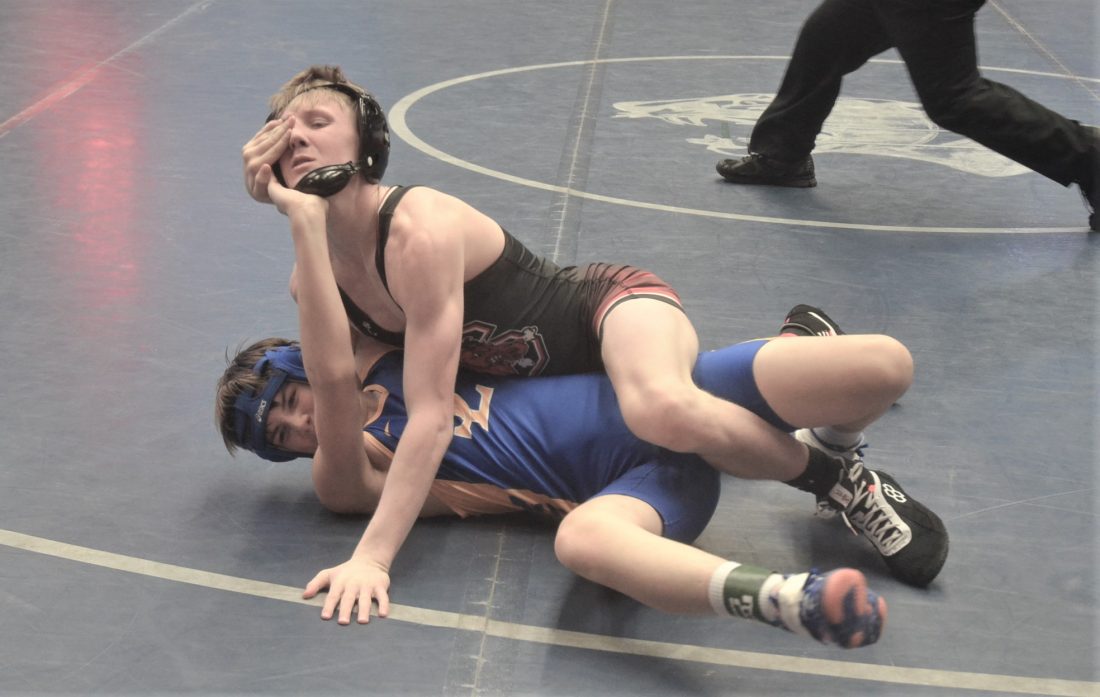 WORKING — Steubenville’s Brody Saccoccia works for back points against Southern Local’s Jacob Conley at 120 pounds during the first night of the OVAC Tournament at WesBanco Arena. Saccoccia won by pin. -- Kim North

WHEELING — The opening night of the 68th-annual Ohio Valley Athletic Conference Ron Mauck Wrestling Championships provided a little bit of everything inside WesBanco Arena, including a lightning-quick pin that nearly tied a national record; a top-seeded wrestler not competing; and all but seven of the 168 seeds having their hands raised. However, one thing remained the same old names as familiar schools rose to the top of the team scores.

Getting a late start because of nearly 70 scratches that shook a few brackets up, the first session lasted a little over 75 minutes as wrestlers recorded 126 pins — half coming in less than a minute — a dozen decisions and six technical falls in the 144 bouts contested.

Eight of fast falls came in less than 10 seconds, but none quicker than the 4-second flattening recorded by Wheeling Park junior Erick Brothers Jr., a two-time West Virginia state champion. The top seed at 220 pounds got an ankle pick and slap of the mat against Shadyside’s Nick Norris. That came with a tick of tying the national record set by Vorhees High School’s Lewis Fernandez in 2019. It tied Jacob Munger of Alma, Mich.

The pin was one of seven recorded by the Patriots, combined with a technical fall, who led the team race by 1.5 points over University High, 47-45.5.

The tightly-contested team race has defending champion Parkersburg South and Steubenville tied for third at 36, with Indian Creek, John Marshall, Martins Ferry and St. Clairsville all checking in with 28.

The biggest shakeup of the tournament came when top-seeded Reese Stephen of Barnesville didn’t weight in at 120 and was scratched from the bracket, which had to be re-drawn.

“It’s a weight issue. We knew he was going to have trouble coming into the season and it finally caught up with us,” Barnesville head coach and Reese’s father Jayson Stephen explained. “We went through it last year when he wrestled at 106. His (growth) clock has hit him and he is still growing.

“He can’t live on a bottle of water and an egg every day,” Coach Stephen said. “It stinks no matter who it is, but it hits a little closer to home with it being him.”

The coach said his other ‘top dogs’ are now going to have to go for bonus points with technical falls or pins.

“We need those bonus points if we’re going to have a chance at anything,” he said.

Reese Stephen, a sophomore returning state placer, thus becomes the second No. 1 seed in tournament history to not make weight and be able to compete. The same thing happened to former Buckeye Local state champion and current Toronto head coach Willie Saxton back in 2005.

“I feel for the kid. I was miserable,” Saxton said. “This doesn’t define his legacy. This is just a tournament … March is when it counts.”

The seeding committee should pat themselves on the back for the job they did this season. Of the 12 seeded wrestlers in each weight, only seven failed to move on, with one being a No. 8 and four being 10s. There were also a pair of 12s that went down.

As far as the Team Class races go, Park also holds that same slim lead over the Hawks in 5A, while Indian Creek and St. Clairsville are tied atop of 4A. Martins Ferry had a six-point edge over Barnesville in 3A and in 1A/2A, Cameron holds a 20-15 margin over Southern Local.

Action resumes on eight mats today at noon with second round matches in the championship bracket and first- and second-round bouts in the consolation bracket. Quarterfinal championship bouts are set for 6 p.m., as are third- and fourth-round consolations. The championship semifinals will be contested at 11 a.m. on Saturday, with the finals scheduled for approximately 4 p.m.

• Wellsville’s Tim Sarge, Sr. was named the OVAC Assistant Coach of the Year.

MINERVA — Indian Creek’s surprise run to the Division II East 1 District Tournament came to an end in the ...