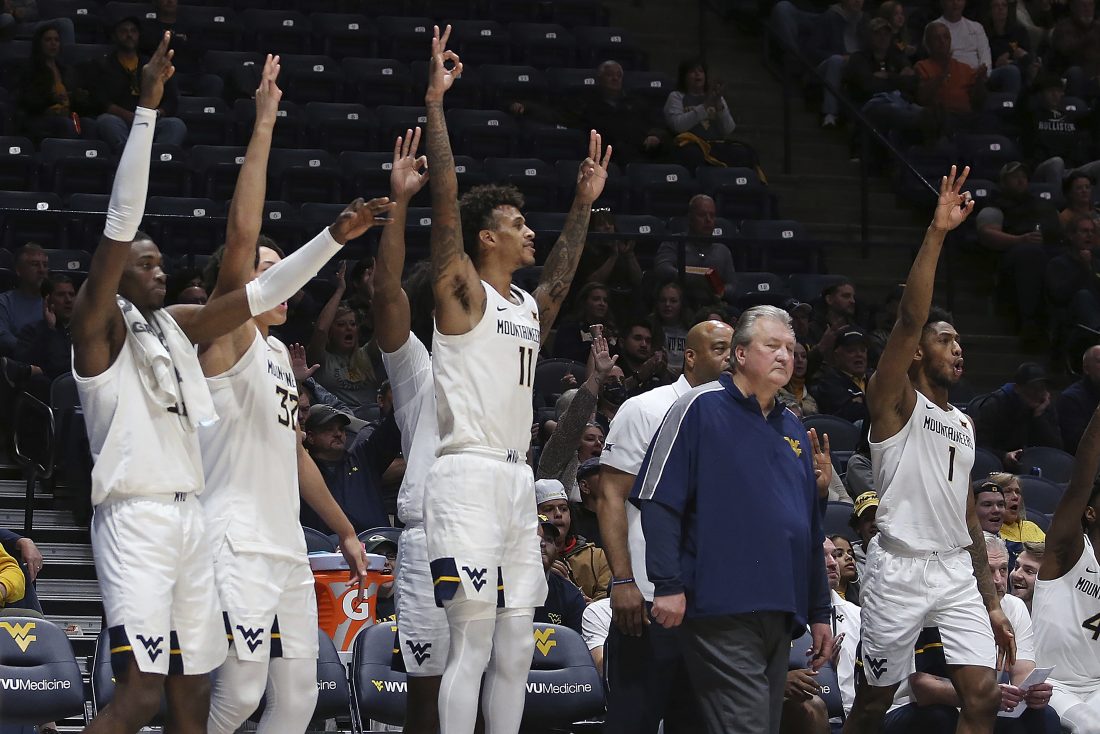 West Virginia players celebrate after scoring against Bellarmine during the second half of an NCAA college basketball game in Morgantown, W.Va., Tuesday, Nov. 30, 2021. (AP Photo/Kathleen Batten)

MORGANTOWN — Sean McNeil had long had Tuesday’s game circled on his calendar.

West Virginia and Bellarmine had never met prior to Tuesday night, but McNeil and the Kentucky-based school had forged a relationship years before the senior guard made Morgantown his home.

Five years ago, as a recent high school graduate, McNeil was set to suit up for the Knights, a then-Division II school located about 90 miles from his hometown. He spent roughly two days there before deciding to return home, a move that would later result in him becoming a focal point for WVU today.

“You always look back and think about where you came from, and you never try to forget where you came from,” McNeil said. “They’ve done big things, just transferring over to D-I a year ago, so credit to them … I definitely think how it would’ve been different. My mom and dad weren’t very pleased with me when I decided to leave within 48 hours, but I joke with them now and I tell them that it was going to play out like this.”

McNeil and guard Taz Sherman — who finished with a team-high 18 points — were the team’s two consistent playmakers in both halves. Despite that, the Mountaineers (6-1) opened up flat, struggled to build separation, and allowed Bellarmine to take the lead roughly eight minutes into the game.

West Virginia would wrestle the lead back, but struggled to build distance as the Mountaineers entered halftime ahead by only seven points.

In the second half, Bellarmine, which has developed an identity as a team prioritizing long-range shots, shot a higher percentage from the field. But a strong Mountaineer defense allowed the Knights fewer opportunities to get shots off, in addition to holding them to only 12% from the three-point line.

“We had some conversations at halftime, figured some things out,” McNeil said. “We weren’t as flat as we were against Eastern Kentucky, but we were probably still somewhat flat in the first half. Picked things up on the defensive end, probably didn’t give up as many second-chance opportunities in the second half, which obviously led to more offensive possessions for us and more buckets.”

A strong second-half run, one in which McNeil and Sherman combined for 15 points, allowed the Mountaineers to charge ahead and build an insurmountable lead. WVU also dominated in bringing down rebounds and scoring second-chance points, factors that pushed the team way out in front.

The win, West Virginia’s sixth in seven games to open the season, showcased its share of improvements, but also areas of continued concern, according to head coach Bob Huggins.

“I think we’re getting a little better defensively,” Huggins said postgame. “Offensively, we probably still rely on Taz too much. I’m all for him getting 25-30 a game, I’m all for it, but we need some other guys to step up and score for us as well, a little bit more. I think we’re starting to get that, but we’ve got to continue to get better at that.”

West Virginia continues its homestand on Saturday, playing host to the Radford Highlanders of the Big South Conference. ESPN+ will broadcast the matchup, which is scheduled to begin at 4 p.m.