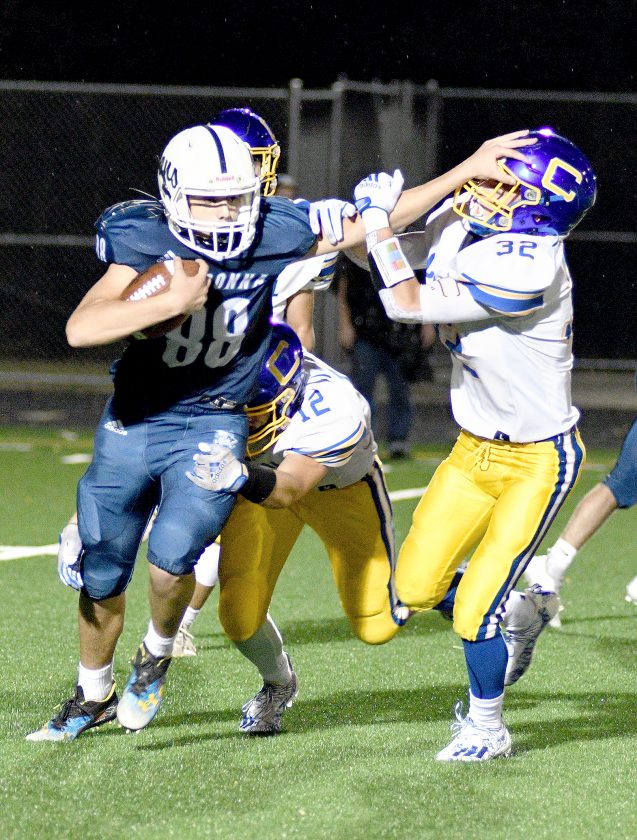 WEIRTON — The Madonna and Catholic Central football teams met in a game filled with playoff implications.

“We keep getting better. I don’t know how. Maybe my practice philosophy is wrong. We are working on individual stuff and tackling. I could not be more proud of these guys.”

The Blue Dons struck for two touchdowns less than five minutes into the game putting the Crusades behind the 8-ball from the outset of the contest.

“They did what we thought they would do,” Catholic Central (3-6) head coach Anthony Agresta said. “They excel in the passing game, and they mixed in the run. We were prepared for everything they would do. They did nothing we weren’t ready for. They executed, and we did not.”

Madonna led 28-0 in the fourth quarter before Catholic Central finally got onto the scoreboard, but it was too little too late.

Madonna mixed the run with the pass all night. The Blue Dons ran for 84 yards on 35 carries, while throwing for 162 yards on 13 completions. All four touchdowns came through the air.

Catholic Central struggled to get much going offensively throughout the game. The Crusaders ran for 72 yards and a touchdown on 22 carries, while throwing for 124 yards on 14 completions.

The Blue Dons received the opening kickoff, and the boys from Hancock Country drove right down the field. The 58-yard drive was capped off with a 19-yard scoring strike from quarterback Santino Arlia to Coleton Littleton on fourth down to give the hosts a 6-0 lead with 9:15 left to play in the first quarter. The 2-point conversion pass was intercepted in the end zone keeping the score at 6-0.

Catholic Central’s ensuing drive lasted all of one play as Madonna’ Lennon Dietrich intercepted an Andrew Dorsey pass, and the senior returned the ball to the Crusaders 18.

On third down, Arlia threw his second touchdown pass of the night — this one a 20-yarder to Mason Thompson — giving the Blue Dons a 12-0. Littleton ran for the 2-point conversion giving the boys in blue a 14-0 lead with 8:09 left in the quarter.

Arlia hooked up with Littleton for a 6-yard score in the second quarter to increase Madonna’s advantage to 20-0. The 2-point conversion pass fell incomplete keeping Catholic Central’s deficit at 20 points with 1:05 left to play before halftime.

That scoring drive covered 27 yards. The Blue Dons took over at the 27 following a 14-yard punt.

Evan Quering caught a 14-yard touchdown pass from Arlia in the third, and Seth Humberson ran for the 2-point conversion extending the Blue Dons’ advantage to 28-0 with 45.7 seconds left quarter.

“That was a game changer,” Rovira said of the scoring drive. “We always start of slow. I am not sure why we start off slow. I always take the ball. Maybe I should start choosing to play defense. Another good thing was that drive wasted a lot of clock.”

The scoring drive covered 97 yards, and it came after the Madonna defense held Catholic Central on fourth down at the Blue Dons’ 3.

Catholic Central received the ball to start the second half, and the Crusaders took over at their own 35 after the kickoff rolled out of bounds. The Crusaders drove inside the 5 only to be turned away by the Madonna defense.

I thought we had a chance to get back into the game,” Agresta said. “We had the ball down inside the 10. We tried a couple different things. We balked up and ran power-I. Then, we tried to spread them out and make them thin, but their kids stepped up and made a great play. That is a senior dominated team. They have a lot of seniors on their defensive line. They were able to bear down and make the play.”

Dorsey scored on a 36-yard run in the fourth quarter, and Antonio Mcginnis split the uprights with the extra point making the score 28-7 with 8:13 remaining to be played in the ballgame.

Arlia completed 13-of-25 passes for 162 yards and four touchdowns to lead the way offensively for Madonna.

Humberson led the way on the ground rushing for 45 yards on 10 carries to go along with his 2-point conversion, while Littleton tallied 32 yards on 14 carries.

Dorsey accounted for 185 yards of offense for Catholic Central. Dorsey ran for 61 yards and a score on 11 carries, while completing 14-of-25 passes for 124 yards. He was intercepted twice.

“Their double tight end formation hurt us last year,” Rovira said. “Tonight, we moved our outside linebacker over. Last year, we played a 3-3-5 stack, which was a mistake. We needed to play with four defensive linemen.”

Chase Littleton also collected an interception for the victors.

“Everybody talks about the playoffs, but I just want us to keep getting better,” Rovira said. “Our kids stepped up against Toronto. I thought we were in trouble because of their size, but our kids played their butts off. They carried that over to tonight.”

“We will see where we are placed,” Agresta said. “We are going to try and fix our mistakes.”