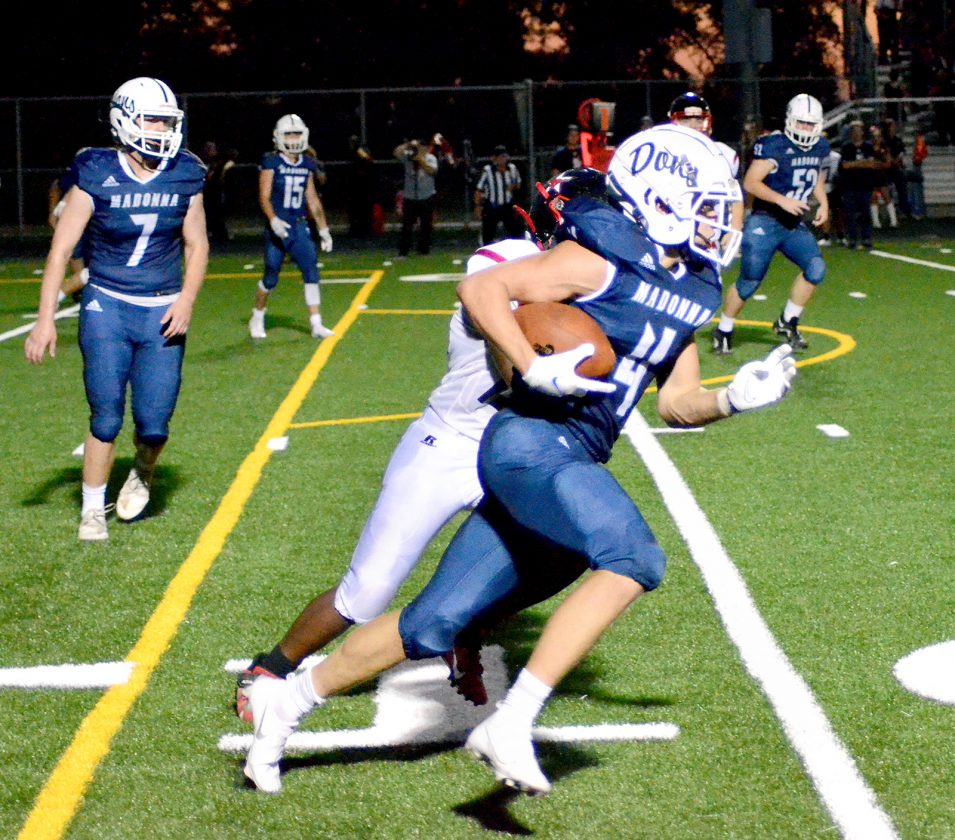 AROUND THE EDGE — Madonna’s Evan Quering races past defenders after catching a pass during Friday’s game against Mathews at Jimmy Carey Stadium. -- Andrew Grimm

WEIRTON — Madonna experienced the good, the bad and the ugly during Friday’s home-opener against Mathews.

The good is the Blue Dons did just enough to come away with a 14-6 win and improve to 4-0 on the season.

The bad and the ugly were several missed opportunities to put the game away, costly mistakes and penalties that assisted a pesky, resilient Mustangs team’s efforts to stay in the game, things Madonna will have to clean up as it gets into the heart of its schedule.

“It wasn’t pretty,” Madonna head coach Dan Rovira said. “It was ugly. It was two small schools. It was hot, we were cramping, and we don’t have 30 guys to sub. It’s no excuse, it just is what it is. We brought a receiver in to play tackle, it’s single-A football.

“We came out with the win, and that’s all that matters. I don’t apologize for ugly wins. I’m not happy about it and we have to fix it, but I’ll take the win.

Santino Arlia threw for 291 yards, but misfired on several open receivers in finishing 27 of 47. He did toss the Blue Dons only offensive touchdown — a first-quarter 8-yard strike to Michael Burdine for an 8-0 lead Madonna would hang onto until adding to it in the fourth quarter.

“He’s got to be better for us, he’s our leader,” Rovira said. “We expect him to hit those guys. They dropped some balls on him, too. We had two screens (dropped) that should have been touchdowns.”

His leading target was Evan Quering, who had another monster night with 11 catches for 161 yards. Quering hauled in a 53-yarder to set up the Burdine score and had a 33-yard touchdown catch taken off the board by a penalty in the second quarter.

“We have to fix it,” Rovira said of the mistakes and penalties. “We had way too many penalties.”

Mathews had several chances of its own to get points only to see it slip away such as fumbling at the Madonna 19 in the first quarter and turning the ball over on downs at the Madonna 11 twice in the second half.

“We had two or three chances to score and didn’t” Bohren, the 82-year-old former Big Red coach, said. “It was a good game; Madonna can throw the ball. We didn’t quit, we had a chance to win the game.”

It looked as though the Blue Dons were going to add to the lead driving late in the third quarter, as Coleton Littleton hauled in an Arlia pass and was on his way into the end zone when a Mustangs (2-2) defender jarred the ball loose.

Two plays later, Mathews’ freshmen backup quarterback Dominci Toto, who replaced an injured Isaiah Munno after halftime, and his running back mistimed a pitch play, and Koleton Grishkovich pounded for an 11-yard scoop and score to make it 14-0.

After Madonna turned the ball over on downs, Corey Lilley made things interesting bursting through the middle for a 56-yard touchdown on the first play of the drive to make it a one-score game again at 14-6.

Madonna was unable to run out the clock, punting the ball back to the Mustangs with 11 seconds to go, and Mathews managed to get three plays off, but a final tackle in bounds let the Blue Dons escape with the win.

“We’re gonna get better,” Rovira said. “We have an extra day to work this week to try and improve on things.”

Mathews: Is scheduled to play Ashtabula St. John at home.