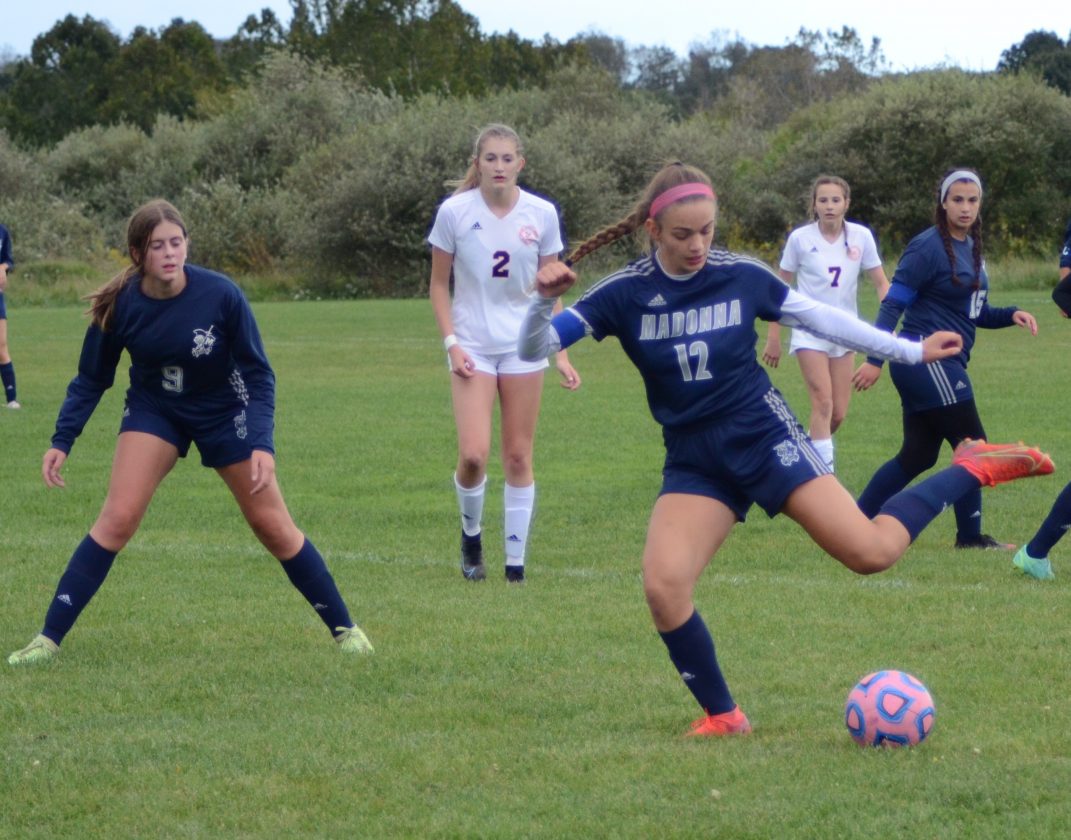 WEIRTON — Not a lot went right for Madonna in Thursday’s OVAC Class 1A/3A semifinal, a 2-0 loss to Linsly.

One bright spot Madonna coach Bob Kolanko could point to after the match, though, was the performance of goalkeeper Julia Wingett, who made 17 saves during a valiant effort to keep the No. 2 seed Blue Dons in the game.

“I can’t say enough to represent how well Julia has done,” Kolanko said. “She became our goalkeeper a week and a half ago when our starting goalkeeper went out with COVID and Julia stepped up. She had never played goalkeeper before that.

“She has played fantastic; she is very aggressive. She made some great saves from point blank shots. She impresses me every day.”

After some back-and-forth play early on, No. 3 seed Linsly was in control for much of the match.

“We had a game plan coming in, we worked on it,” Linsly coach Chuck Neighoff said. “Madonna is always a well-prepared team. It’s hard to play them, playing them twice in one year is always harder.

“We knew we had to control the center of the field and we made sure the entire time we were winning every 50/50 ball. The girls played well and followed the game plan.

“Great job by their goalkeeper, she made some really big saves.”

However, despite possessing the ball the majority of the time and holding a wide advantage in shots, the Cadets (6-6) found themselves up only 1-0 more than 10 minutes into the second half.

That is when Sofia Robertson threaded a long shot through defenders and past the vision of Wingett, making it a 2-0 game in the 52nd minute and allowing the Cadets to breathe a little easier the final 27-plus minutes.

“We weren’t having much luck, we were missing the goal and not finishing,” Nieghoff said. “It was a big relief. The girls kept pushing and finally broke through.

“We had talked about (shooting from distance) at halftime. (Madonna) was dropping back quite a bit, so that’s why I started pushing my outside back up to put some shots on.”

The Cadets first goal came in the 27th minute when Kailyn Wilson connected from in close, finding the ball in a scramble after a corner kick.

Prior to the goal, Madonna (6-4-1) had its best two chances to score with a free kick that did not make it to the net and a corner kick that resulted in a short scramble in front before a header attempt missed the ball and it was cleared.

“The first 15 minutes I thought we did well,” Kolanko said. “We played the ball well and made the right passes. After that, once we got pressured too much, we stopped passing the ball and started just playing the ball. We lost any possession.

Wingett made three big saves in a three-minute span to keep it a 1-0 game at the break.

She made four more big saves in the first 10 minutes of the second half, before Robertson’s shot snuck by.

Madonna’s Gabriella Spickard had the best opportunity for the Dons in the second half, racing down the sideline and sending a shot along the grass towards Linsly keeper Mia Camps, but it provided no trouble.

Wingett made a couple more saves on back-to-back shots in the 67th minute, and the Cadets had another goal waved off by an offsides call, but the Madonna offense was never able to get much going.

Linsly: Advances to face No. 1 seed Catholic Central, a 7-0 winner over No. 4 Wheeling Central in other semifinal on Tuesday, in Saturday’s OVAC championship match.

“It means a lot to us,” Neighoff said. “We were the No. 1 seed last year and didn’t get the chance to go through. Our goal has been to play in honor of (former coach) Darryl Crews. To get through (to the final) means a lot. I’m happy for the girls.”

The Cadets won the regular season meeting between the teams, 3-1, Sept. 8 in Steubenville.

Madonna: The Dons’ next scheduled game is Tuesday at Oak Glen.