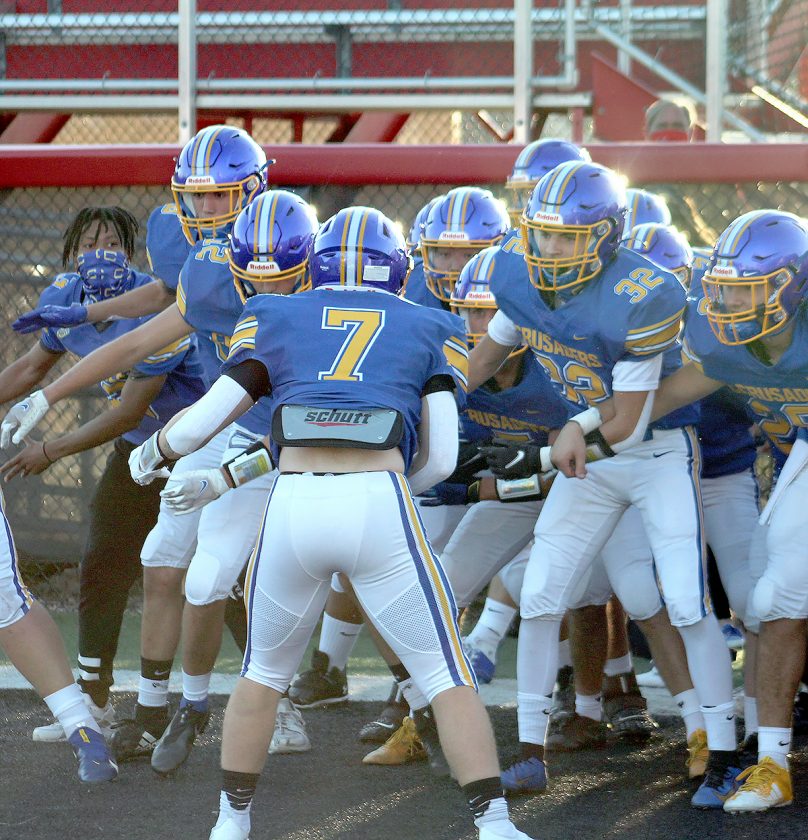 HEADED ON THE ROAD — The Catholic Central football team heads on the road to test Mathews on Friday night, and the coach on the other side of the field from the Crusaders’ Anthony Agresta has a tie to Steubenville as he coached Big Red in the 1970s. -- File

The kick for the 2021 opener and the first meeting between the schools is set for 7 p.m.

“Winning breeds winning and that’s what we need,” he told WKBN-TV in Youngstown. “We need Friday night wins.”

Mathews has won just six games during the course of the last three years. In 2020, the Mustangs lost seven games and finished the season with just 15 on the roster. This year, they have doubled the number of kids playing football.

While Boren is a newcomer to the Mathews program, Anthony Agresta is entering his third season at the helm of the Crusaders.

“They seem to be very balanced between the run and the pass from what we have seen of them in our live scout and the one film we have,” Agresta said when asked about the Mustangs. “It is evident that coach Bohren is trying to get those kids to play physical football. Mathews looks like an improved football team.”

Senior Isiah Munno will again start at quarterback for Mathews. Senior Corey Lilly and Century Hobbs are expected to get most of the carries at running back. Wide receiver Ethan Petek and tight end Dom Frazzini are Munno’s top receiving targets.

Munno and Lilly will anchor the defensive line. Hobbs, Frazzini and Logan Corson are veterans at linebacker.

In 2020, Central was able to play 10 games, posting a record of 2-8. The schedule Agresta’s crew ended up playing looked nothing like the original slate. In his first year, Agresta guided the Crusaders to a 5-5 mark.

“This being my third year, I’d call this our best camp to date,” Agresta said. “Last year was a nightmare with COVID and the first year was just a push to get all the new terminology in. This year, I thought we had a very good camp.”

Central participated in just one scrimmage, taking on Bridgeport.

“It’s no secret that we struggled against the run game last year,” Agresta said. “We showed in our scrimmage that we are playing more physical up front and playing much better against the run.

“Our secondary did not let anyone get behind us in our passing scrimmages or the scrimmage against Bridgeport. We were not playing in the scrimmage to keep score, we were playing to see if we are ready to play football and I think our kids showed that we are.”

Junior Andrew Dorsey will be manning the controls of the Central offense. He saw action at several offensive spots in 2020 and also led the team in tackles from his inside linebacker position.

Senior Tim Lamantia returns at running back and is joined there by junior Dashon Seditz, sophomore Toby Rusciano and junior Todd Jackson.

Senior Primo Toriscelli returns at wide receiver. In 2020, he recorded 18 catches, good for 158 yards and a touchdown. Others expected to see time there are promising freshman Tommy Pergi, and sophomore B.J. Fallon,

“The offense usually is a little behind the defense at this time of the year,” Agresta said. “That’s not unusual and that’s the case with us right now. We are hoping that as Dorsey goes through the maturation process, our line and our running back will carry us early.

“We hope we don’t have to rely on him to make a lot of plays early. As the season goes forward, we expect everything to be running pretty smooth.”

For Agresta, the key word as he prepares his Crusader for Friday’s opener is confidence.

“We are playing better defensively and offensively our guys understand what we are trying to do much better than the first two years,” he said. “The one intangible right now is confidence.