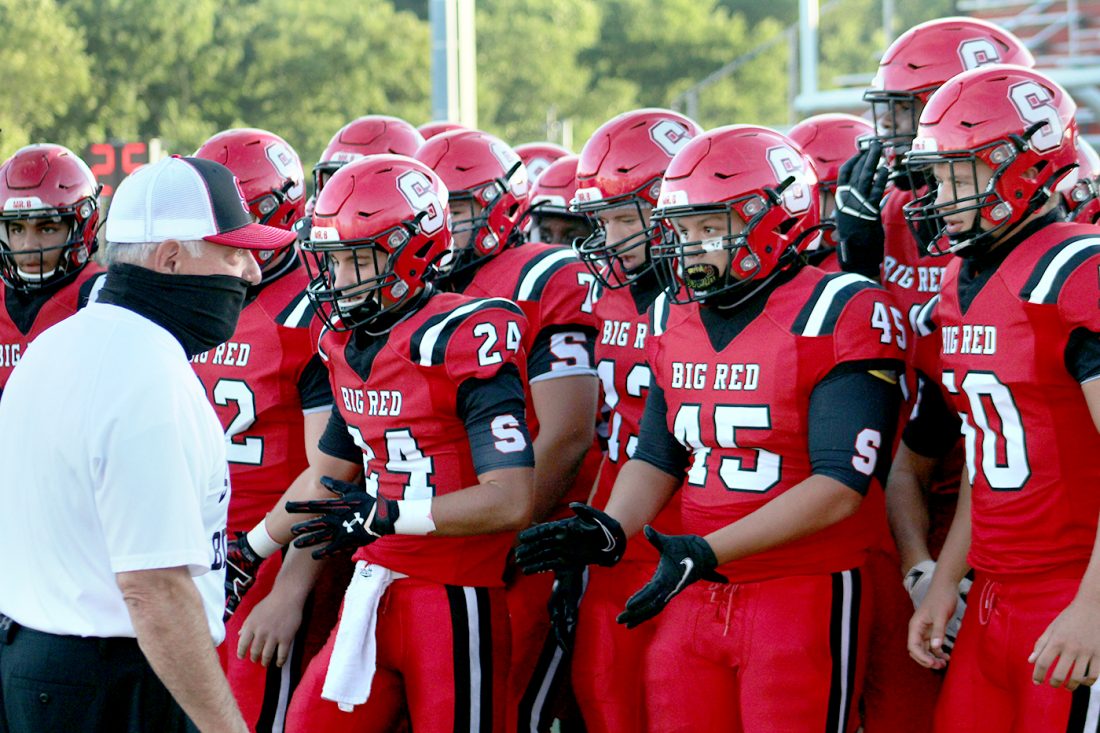 READY TO GO — Just like in this photo from 2020, coach Reno Saccoccia and his Big Red team are ready to go in the 2021 season, opening up at home Friday night with a tough test from Olentangy Liberty. -- File

STEUBENVILLE — Reno Saccoccia and his 2021 Steubenville High School football team are preparing for what the Hall of Fame coach calls “the toughest opener we’ve had since I’ve been here.”

First-time opponent Olentangy Liberty, a Division I member of the Ohio Capital Central Conference, will invade Harding Stadium Friday. The kick is set for 7 p.m.

“They are big, they are physical and they are very well-coached,” Saccoccia said of the Patriots. “We are in for a major, major challenge.”

During the COVID-impacted 2020 campaign, Steve Hale guided Liberty to an 8-2 record. The Patriots knocked off top-seeded Dublin Coffman in the regional semifinals before falling to Springfield. The win against Coffman gave Hale’s squad some revenge for its only regular season defeat.

The Patriots have averaged just over 10 wins per season since 2016. The success over that time includes three Division I state semifinal appearances and three OCC titles. Liberty has not missed the Ohio playoffs since 2013.

As Saccoccia, who is entering his 51st season of coaching and his 39th campaign as the Big Red grid boss, noted Liberty has plenty of size.

The offensive line is led by senior Carter Smith, 6-6, 285 pounds, who committed to Indiana in July. He is a three-star recruit and the 20th rated player in Ohio. Smith earned 26 scholarship offers.

“Offensively, they are a big zone team,” Saccoccia said. “They seem to be running a little less (run, pass options) than they did last year. We’ll see plenty of trap plays from them.”

Hale lost 30 players to graduation, thus the Liberty lineup will include plenty of new faces. The Patriots boast a roster of 97.

“We’ve got a lot of guys on the roster that are good players,” Hale, who is entering his 19th season with Liberty, told ThisWeek Community Newspapers. “We’ve got to find a way to put them in the right spot and give them a chance to be successful.

“We’ve got a lot of guys that are playing varsity for the first time. They are learning on the run and getting better every day.”

Liberty is expected to stay with its base spread offense.

“I don’t think we’re going to do anything to surprise anyone this year,” Hale said. “The opponents we play probably won’t have to scout us too hard. They have a pretty good idea of what we try to establish.

“We try to be balanced in the run and pass game.”

Big Red, which went 5-3 a season ago and fell in the second round of the Division III playoffs, has emerged victorious in 18 of its last 19 season openers. Saccoccia’s 2020 squad recorded the program’s 22nd straight winning season and participated in the playoffs for a 20th consecutive year.

“We saw some improvement in camp — mental more than physical,” Saccoccia said. “We still have plenty of work to do. Our scrimmages went OK. The best thing about them is nobody got hurt.

“Hopefully, we will be going into Friday night healthy. We have a couple of kids who were not scheduled to start banged up. They have appointments with their doctors this week, so we will see.”

Heading into two-a-day practices, Saccoccia was stressing conditioning and the need for his team to “be the most well-conditioned team we can be going into the first game.”

“We focused on conditioning and hopefully accomplished our goal,” he said. “You could tell the difference in the amount of practice time we were allowed. Basically, we were one week short this year because of the early start.

“We don’t want to condition this week because we play. We had one less week to condition in pads. This summer, we only had eight doubles and usually, we have 13-14 of them.”

Junior Phaeton Hill emerged from summer camp as the starter at quarterback for Big Red. He will be joined in the backfield by senior Rodney James, junior Spencer Ostovich, junior Tylik Sims and junior Gavin Bozica. Juniors Kyjhaun Hopkins and Dorian Thorn will see time at fullback.

Ostovich ran for 630 yards as a sophomore while James compiled 596 in just five games. Sims averaged 6.2 yards a carry.

Brenton Jones, a senior, along with juniors Ivan Buggs and Hakim Edwards should be Hill’s top targets at wide receiver.

“We need to get better on every snap,” Saccoccia said. “We need our players to go as hard as they can for every snap. Hopefully, by the time our opener rolls around, we will have 28-29 kids ready to play a football game because we will be going against a team that has nobody going both ways.”

As he looked ahead to the matchup with Olentangy Liberty, Saccoccia said “everything will be a key.”

“No matter what happens–conditioning, physical play, speed, size — everything will be a key,” he said. “We have to be both physically and mentally tough. We have to be perfect in our assignments and play with a great amount of intensity.

“In short, we can’t be lacking in any area.”