Red Riders have their hands full, look for revenge 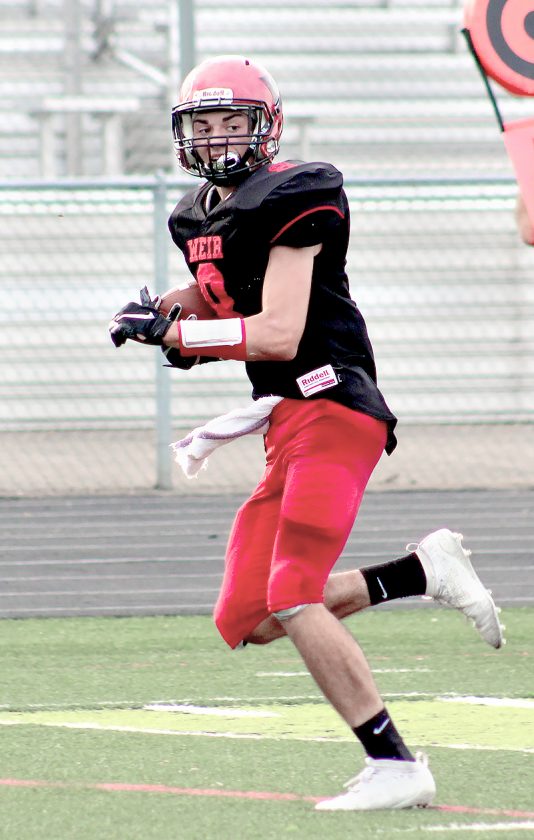 WEIRTON — The last time Weir High played Fairmont Senior was almost a year ago in the state Class AA semifinal in Fairmont, and it wasn’t pretty for the Red Riders.

The top-seeded Polar Bars blanked the Red Riders, 59-0, in a game that Weir High just couldn’t do anything right.

The Polar Bars invade Jimmy Carey Stadium Friday and, like in 2018, are the top-ranked team in West Virginia, so it probably will take a near perfect game for the Red Riders to get a much-needed win.

Weir High lost last week at Plum in Pittsburgh, 30-27, dropping them one spot in the state rankings to 17th. A loss Friday could spell disaster for Weir High’s 2019 playoff hopes.

Last year, Fairmont Senior coach Nick Bartic had Connor Neal at quarterback. All he did was earn the Kennedy Award, emblematic of being the best football player in West Virginia.

“Fairmont Senior is very good like they were last year,” said veteran Red Rider coach Tony Filberto, whose club lost three games a year ago, two of them against the Polar Bears. “This year’s quarterback, Gage Michael, probably is a Kennedy Award candidate, too. They are different quarterbacks in that Neal was a great passer (he completed 13 of 20 passes for 226 yards against Weir High in the playoff game). Michael is more of a runner, who can pass well.

“They play out of a spread offense and want to pass the football, but this year they are letting Michael run the ball more. He just has that knack of scrambling and getting loose for big plays. He’s pretty darn good at what he does. Fairmont has some very talented and big linemen up front.”

Filberto said seniors Zach Frazier (6-foot-3, 285 pounds) and Dominick Owens (6-2, 320) have the ability to dominate the line of scrimmage on both sides of the ball. He said Frazier could be the best lineman in the state. They are two returning starters from last year. Frazier has been a first-team all-stater the past two years.

“Fairmont is a great football team that has been to the state final championship game the past two years, winning it all last year,” Filberto said. “They are capable to doing the same again this year. They are in the same type of offense as last year, but the quarterback is running the football more than they have in the past.

“On defense, they play the 3-4 front with three big kids on the line that are so good it takes five guys to block those three. They can dominate the line of scrimmage. They don’t blitz. They are very basic with what they do defensively.

In the game at Plum last week, Weir High’s dominance was overshadowed by the three-point differential in the scoring. Filberto said his charges made a couple of mistakes and had some bad luck.

“We can’t do what we did against Plum again this week,” Filberto said. “Those turnovers at inopportune times were costly. We have to take care of the football Friday and use long drives to keep the Fairmont offense off the field.”

“That’s a pretty good football team we played. We dominated the game. We turned the ball over a couple of times, giving them a short field, and they took advantage of it.”

The statistics showed Weir High running a total of 64 plays for 356 yards of total offense to Plum having 39 plays and 150 yards.

“We were down to the 20-yard line at the end of the game and had a pass intercepted at the 1 with four seconds left on the clock,” said Filberto, whose club is 3-3. “We were out of timeouts and just couldn’t get it done, but I thought we played a very good football game.

“I still think we have a great chance to make the playoffs. If we would have won last week, we would have gone to ninth in the standings, and that is indicative of our tough schedule. Instead, we’re down to 17th. That’s why we want to play as tough a schedule as we can.”

Weir High quarterbacks, senior Sebastian Spencer and junior Anthony DiMatteis, were a combined 13 of 20 passing for a total of 186 yards against Plum. Spencer completed four of five passes for 65 yards, including a 16-yard scoring toss to Elijah Gillette. DiMatteis was nine of 15 for 121 yards. Junior running back Logan Walters scored on runs of 1 and 3 yards.

For the season, Spencer has completed 27 of 53 passes for 387 yards and five touchdowns. DiMatteis is 23 of 47 for 299 yards. The speedy Spencer gained 89 yards on the ground against Plum and is the Red Riders’ leading rusher with 423 yards on 62 totes and eight touchdowns.