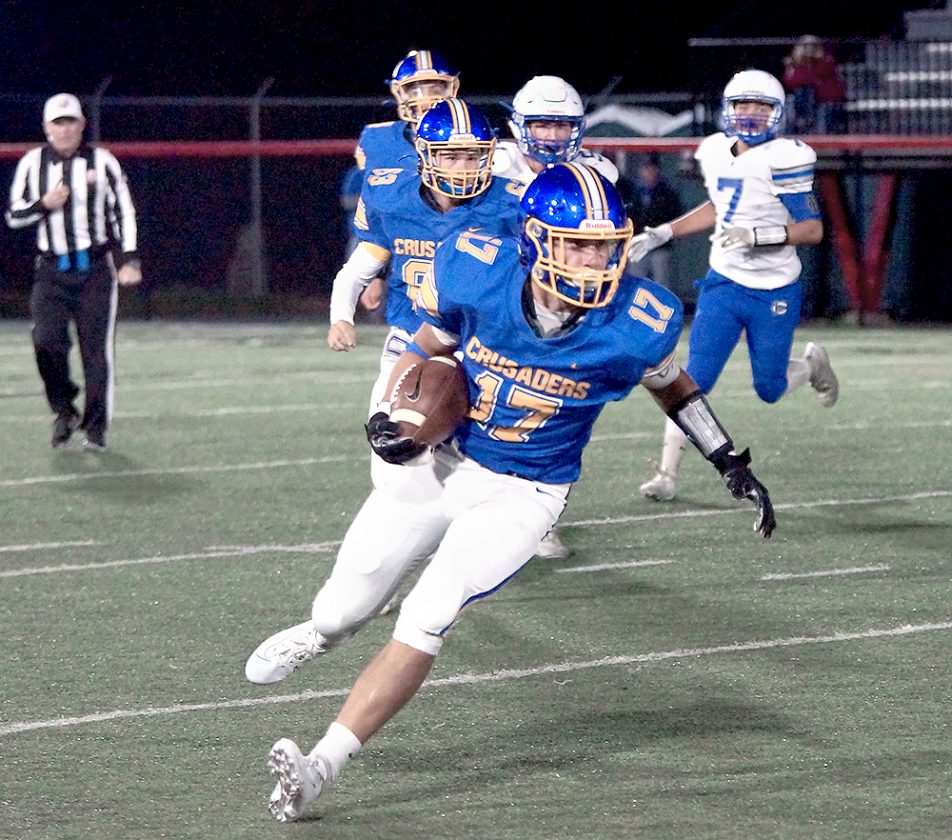 After taking down Caldwell, 35-2, the Crusaders went on the road and fell to powerful Lucas. Last week, Harrison Central turned two interceptions into touchdowns and pinned a 21-7 setback on Anthony Agresta’s club.

Saturday’s kick is set for 7 p.m. Central enters at 3-4, while Trinity, which is fielding a football team again after a hiatus of several years, is 2-4. The Warriors started with victories over Mapletown, Pa., and Hannan before falling to Fairport, Madonna and Bridgeport. Trinity also forfeited its Sept. 20 game at the Maryland School for the Deaf.

It has been five years since Trinity was able to field a football team. The school began with a varsity program in 2009 but dropped the sport in 2010. A 7-on-7 team was introduced in 2011 and lasted three years.

Marcus Law was hired in March to direct the Trinity team. He is a former defensive back for West Virginia and served as an assistant coach at Morgantown High School the past three seasons. Law played his high school football at Canal Fulton Northwest.

The Warriors have four seniors on their roster, along with five juniors, three sophomores and eight freshmen.

Freshman Drew Boczek and senior Nick Beimel have been splitting time at quarterback for Trinity. Davon Eldridge, another freshman, has been getting the bulk of the carries at running back.

“They have some kids in the skilled positions that are talented,” Agresta said of the Warriors. “They are going to fight hard, I can tell you that. From watching the three films we have on then, they scrap and they look like they are well coached. We will need to be prepared and ready to go

“One of their halfbacks can scoot a little and get the edge. That’s something we need to be conscience of. They also will rotate their quarterbacks — one is a runner and the other a game manager. We need to know when the runner goes on the field. We’ve a pretty decent look at them on film, and they’ll be a challenge.”

A week ago, Central fell behind Harrison Central 14-0 at the intermission after the Huskies stopped a Central march to their 13-yard line with an interception. Following Jeffrey Dawson’s third-quarter scoring run, the Crusaders were driving for a tying score when Harrison picked off another pass and scored three plays later.

“We’re definitely happy with the strides we have made so far this season,” Agresta said. “We’re not happy with the results from Saturday. That is a game we feel like we should have won. We let it get away from us.

“We have to make sure we made good decisions in the red zone and realize how important it is to finish drives in there. We were moving the ball fine from the 20 to the 20. You can’t turn the ball over when you get in there deep. We made some mistakes and they cost us — they cost us dearly.”

Dawson had another strong game for Central, collecting 122 yards on 24 carries. For the season, the speedy senior has 621 rushing yards and has found the end zone 10 times. He is the fourth leading rusher in The Herald Star/Daily Times coverage area.

Junior Ryan Gorman has thrown for 718 yards and four scores. Anthony LeFever has 16 receptions to pace the Crusaders, while Anthony Sprochi has 11. Both are seniors.

Through seven games, the Crusaders are averaging 233 yards and 18 points per game. The defense allows 303 yards and 28 points.

“I’m not displeased with the progress of our young kids at all,” Agresta said. “They have worked very hard and continue to make strides every week.

“Something about a freshman or someone who has not played before is they make strides during the week at practice and then they are confronted with something in a game that’s a first for them. That can cause problems. We didn’t get a whole lot of that on Saturday. We’re disappointed with the outcome — that one is still stinging a little.”

Following the game with Trinity, Central will travel to Madonna before finishing the regular season at home against Toronto. The Crusaders currently are ranked 17th in the Division VII, Region 25 computer standings.

“Every game is a must win,” Agresta said. “If you’re talking about the postseason right now, we have to win all three games to have a shot.

“You just can’t look past the one that’s right in front you, and we’re focused on the one in front of us right now.”