Creek wants to make most of senior night 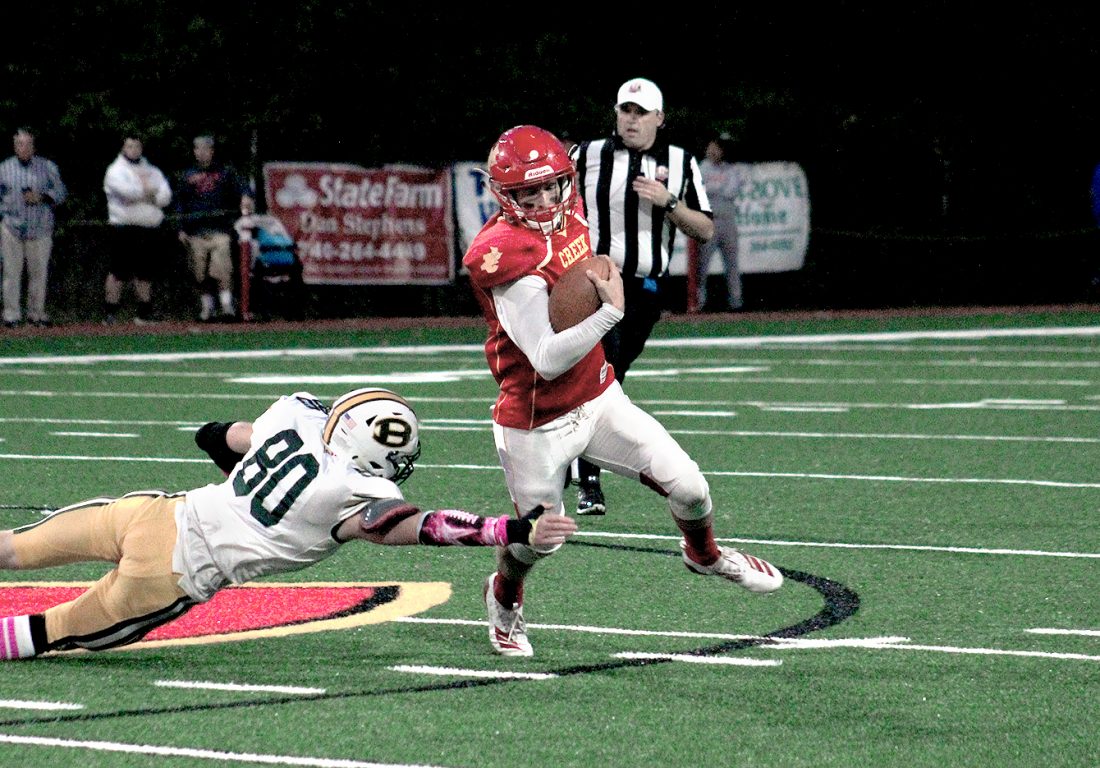 WINTERSVILLE — Indian Creek coach Andrew Connor has a lot of respect for Mike McKenzie and his Beaver Local program.

The two Buckeye 8 North rivals meet Friday night at Kettlewell Stadium with the Redskins looking to keep working toward a playoff spot — and potential home game.

“Over the years I have been fortunate enough to become good friends with coach McKenzie,” Connor said. “Every time I have played him, no matter where he’s been, his kids have always played hard and been well prepared. For everybody involved, we play Beaver Local in our seventh- and eighth- grade league. The kids know each other very well. They have competed against each other for years.

McKenzie, a former Edison head coach, and his bunch showed resilience in Week 7, coming back from a 20-6 halftime deficit for a 21-20 win at Buckeye Local. Connor knows that his Redskins can’t count the Beavers out.

“I would expect nothing less than for them to be a resilient football team,” Connor said. “They always play hard. They have good kids and they are well coached. They run the ball well. They have a lot of different formations. Defensively, we’re impressed with their ability to rally to the ball.”

The Redskins, who took care of business against Martins Ferry in Week 7, sit 6-1 and fourth in Division IV, Region 13, currently in a position to host in round 1 of the postseason.

“It’s amplified for us, not just because of the playoff race, but Friday night is senior night,” Connor said. “It’s our last regular-season home game. It has been a pretty special run for this senior class.”

Trevor Frante is the second-leading rusher in the Herald-Star/Daily Times coverage area with 751 yards, 12 touchdowns (three against Martins Ferry) and a yards-per-carry average of 5.91. Sam Mazar has thrown for 503 yards and a score, while rushing for 254 yards and five more six-pointers. As a whole, the Redskins offense averages 282.86 yards and 27.43 points per game.

On defense, Indian Creek ranks third in the area, allowing 208.86 yards and 7.57 points per game.

On the other side, Beaver Local averages 24.29 points for per game and 21 points against.

GLEN DALE — The bye week came at the right time for Mac McLean and his Brooke Bruins, who were dealing with a lot of key injuries prior to the week off. Now, rested and healed, the Bruins begin the final stretch of the season Friday night with a trip to John Marshall.

“The bye week came at a good time for us,” McLean said. “Max (Camilletti) is going to be 100 percent for the first time since late in Week 2. We’re looking forward to it. We’re going to get some other guys back, too. It was good to get some kids in the trainers room and not have to play a game.

“We shut a lot of our starters down last week and just let them heal. We’re going to be pretty close to all-hands on deck this week.”

The Brooke (1-5) offense, which got off to a good start early in the season, but has been struggling of late, averages 16.8 points and 257 yards per game. Camilletti has 203 rush yards and a score in limited action, averaging more than five yards per carry. Josh Shorts has thrown for 710 yards and nine touchdowns.

“I think one of the things we have to try to do is get the ball in our playmakers’ hands,” McLean said. “We need to put some points on the board and take some pressure off our defense.”

On defense, the Bruins allow 430.2 yards and 43.8 points, numbers McLean and company will look to improve on to get more wins before the end of the season.

“When you’re playing a team like that, you have to be able to stop their base plays and stop that iso,” McLean. “We have to make a team like John Marshall we have to make them go to plan B, and that is going to be a tall task. We have to turn them away a couple times early and get some confidence.”

“I know from watching them on film — when you play certain teams, you get used to a certain brand of football — and they remind me of a lot of other John Marshall teams we have seen,” McLean said. “They are big up front and physical. They have some young guys on the field, but what they lack in age, it they aren’t lacking in physicality. They are an able-bodied group of men.”

YORKVILLE — The Panthers came close to getting their second win of the season in Week 7, coming a point short, 21-20, against Beaver Local at World War II Memorial Stadium.

Buckeye Local is back at home Friday night and looking for another strong showing against East Liverpool.

The Potters, 3-4, cling to a small mathematical playoff chance in Division IV, Region 13, sitting 15th. They average 26.43 points per game, boosted by a big offensive showing against Edison in Week 7, and allow 21 points on defense.

Buckeye Local’s offense averages 164.71 yards and 12.43 points per game. It is led by Seth Richardson’s 582 yards and three scores passing. Brian Palmer Jr. has hauled in 15 passes for 132 yards and two scores.