Classic in the making 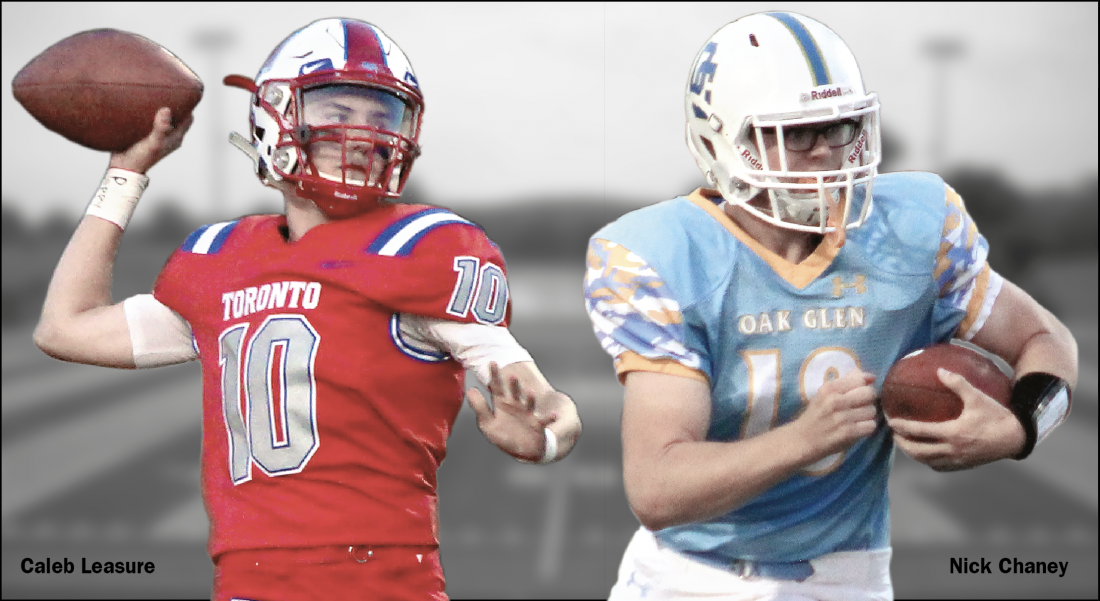 NEW MANCHESTER — Something will simply have to give on Friday night when 5-1 Toronto travels to 6-0 Oak Glen.

With the Red Knights’ lone blemish coming in Week 1, both teams have won at least five straight games. That will change for one the teams by about 9:30 p.m. on Friday.

“They’re right across the river,” Oak Glen head coach Ted Arneault said. “It’s great to play close games. They are a school our size. This is an exciting matchup. It’s a great game for us.”

The Golden Bears have the No. 2 offense in the Herald-Star/Daily Times coverage area, putting up 435.17 yards and 41.67 points per game, trailing only Big Red in yards gained. That high-powered offense will face the No. 2 ranked defense in the area as Toronto has allowed just 184 yards and 9.5 points per game. Something will have to give.

“We’re anticipating a hard-fought battle on both sides of the ball,” Toronto head coach Josh Franke said. “They have a really good football team, but we think we do, too. It’s going to be one of those fun games. Our message in practice was we can play with the best of them when we show up and play our game.”

The Red Knights’ offense is no slouch, either, ranking third in the area racking up an average of 342 yards and 30.17 points. The Golden Bears defense? It is the only defensive unit with better numbers than the Red Knights, allowing just 136.67 yards and 9.5 points. Something will have to give.

“They are a balanced attack,” Arneault said. “They’ve got a couple of nice running backs. They’ll get into three back sets and run the ball right at you. They have a nice wideout, Zach Stackhouse, and their quarterback has impressed me since he took over the reigns from Nate Karaffa. They are a very formidable team and they have shown resilience winning tight, close games.

“They use a lot of trick plays. They have some razzle-dazzle. They use some awkward formations. They do different stuff to try to throw you off. This should be an exciting matchup.”

Oak Glen’s Nick Chaney once again is one of the top passers in the area, ranking second with 1,185 yards, 13 touchdowns and three interceptions. His Toronto counterpart is fourth in the area with 763 yards and 12 scores along with seven picks despite missing the opener.

“We have to keep the pressure on them on defense,” Arneualt said. “We have to not allow the big play and create turnovers. I’d like to see our defense get as many turnovers as we can. We have done a great job of that. We want to get Leasure out of his comfort zone.

“Offensively we need to play our game and be balanced. I’d like to see us control the clock.”

“We have to play smart football. We have to limit penalties and turnovers. It boils down to turnovers and big plays. We have to hold onto the ball and have more big plays than them. We have to run the football and contain their offense.”

Patterson also is the No. 2 ranked receiver in the area with 27 grabs for 487 yards and five more six-pointers. Toronto has its own deep-play threat in Zach Stackhouse, who has 15 grabs for 288 yards and five touchdowns, averaging nearly 20 yards per catch.

The matchup is big in terms of the playoff races for each school, too. Oak Glen ranks sixth in West Virginia Class AA, which would be good enough to host a playoff game in the opening round. A loss to the Red Knights might bump it out of the top eight.

“Unfortunately with the way the West Virginia playoff system works they are Class A to us, even though they are pretty close to our size,” Arneault said. “They have bonus points for the victories that they have. They have played good teams that have had success. It’s a big point game for both teams.”

Toronto also has its sights on a home playoff game, sitting atop the rankings in Ohio Division VII, Region 25. A win would only further solidify its place.

“This has major playoff implications for both teams,” Franke said. “If we were able to secure a victory, it would almost guarantee us one of the top two seeds in our region. They can secure a lot of playoff points for themselves as well. There is a lot at stake for both teams.

“It sets up for an epic showdown on Friday night.”