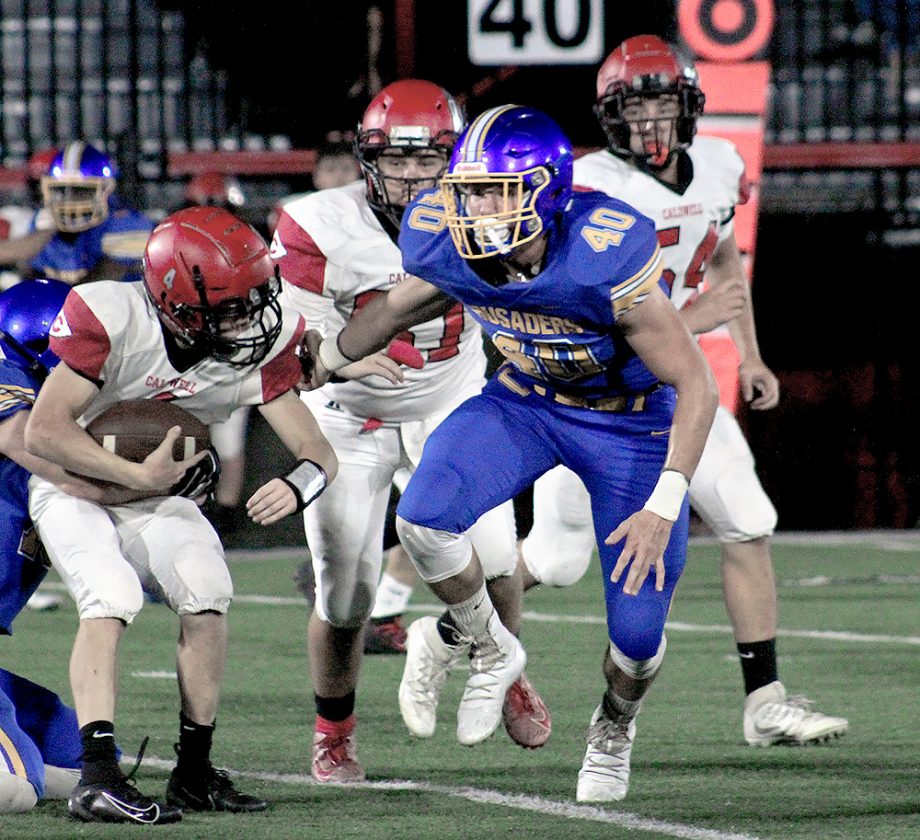 LUCAS — Another road game and another rugged test, so it goes for Catholic Central’s football team.

Coach Anthony Agresta and his 3-2 Crusaders will make the long trip (roughly a two-and-a-half-hour drive) to Richland County Friday for a date with the 4-1 Lucas Cubs, who are ranked fifth in this week’s Division VII, Region 25 computer standings. The kick for the first meeting between the schools is set for 7 p.m.

Coach Scott Spitler’s club played a couple of Ohio Valley foes last year, ripping Harrison Central (55-20) and thumping River twice — 62-6 in the regular season and 42-0 in the opening round of the playoffs.

“They look like a whole lot to deal with on film, they really do,” Agresta said. “Our kids had good practices on Monday and Tuesday, and our confidence level is high.

“We need to beat a good team on the road. That’s the next step for us. We respect Lucas, but we look forward to the challenge.”

Central is 3-0 at home but 0-2 on the road, having fallen to 4-1 Wheeling Central and unbeaten Southern Local.

“Our three road games have been quite the test,” Agresta said. “But, you know what, those things can turn into opportunities for you if you have the right attitude.

“Wheeling Central on the road, Southern Local on the road and now Lucas. They’re all big, strong, very physical football teams. We have to look at these things as opportunities, and that’s what this is for us — an opportunity.”

Lucas returned a host of starters on both sides of the ball from 2018. Offensively, 10 starters were back, including senior quarterback Logan Niswander. Spitler also welcomed back 10 defensive starters.

Niswander (6-foot-3, 197 pounds) had thrown for 435 yards and seven touchdowns to date. Ethan Sauder has nine receptions for 146 yards and a pair of scores. Carson Hauger has hauled in five Niswander aerials for 154 yards and seven six-pointers.

The Cubs love to run the football, and senior Tommy Zirzow (5-10, 190) leads the Lucas ground attack with 519 yards and six touchdowns. Sauder, a 5-10, 161-pound junior, has contributed 427 yards and five scores. The Lucas offense averages 247 yards per game on the ground.

Four of the five offensive linemen are returning starters. Leading the group is senior tackle Blake Coffman (5-11, 290), while Tucker Nolen is a 6-1, 232-pound junior guard.

“Their offensive line is very cohesive,” Agresta said. “They do a good job of pulling people on the back side and getting a lot of people in front of the ball carrier.

“Their backs are tough to bring down. They run hard. Lucas plays old-fashion football, and they play it really, really well.”

The Lucas defense allows an average of 192 yards per game (99 coming on the ground). Opponents are completing just 39 percent of their passes, and the Cubs have 10 interceptions.

Central improved to 3-2 with its 35-2 victory over Caldwell on Saturday. Senior running back Jeffrey Dawson scored three touchdowns and rushed for 94 yards.

“We tell everyone this all the time — it’s never quite as good as it looks in person, and when you have a bad night, it’s never as bad as it looks,” Agresta said. “Most football games boil down to between eight and 12 pivotal plays. Against Caldwell, we were able to win those plays.”

Through five games, Dawson has compiled 448 yards on 85 carries. He is averaging a little more than 5 yards a trip. He also has scored nine touchdowns. Fellow senior Jayden Keeder has contributed nearly 100 rushing yards and two scores.

In his first year of high school football, junior quarterback Ryan Gorman continues to develop for the Crusaders. He has thrown for 524 yards and three touchdowns.

Senior Anthony LeFever has 13 catches for 196 yards and a touchdown. Anthony Sprochi, also a senior, has seven receptions for 130 yards and a six-pointer.

Offensively, the Crusaders average 241 yards a game (130 via the ground) and 22 points. The Central defense surrenders 286 yards an outing and 24 points.

“Catholic Central’s discipline and physicality jump off the screen when you watch their film,” Lucas’ Spitler said. “Team speed also is very evident, and they have some great skill offensively.

“We will have our hands full Friday. To me, controlling the line of scrimmage will definitely be the key.”

Given the length of the trip, Agresta has plans to make the ride a little more comfortable.

“Obviously, we’ll have to leave a little early, and we’ll try to split the trip in half,” he said. “We’ll have our pregame meal halfway up. We’ll try to make the trip a little shorter. Our goal will be to arrive our normal 90 minutes before kickoff.”

Central is 17th in the Region 25 standings. The Crusaders will play three of their final four games at home — hosting Harrison Central on Oct. 12, Morgantown Trinity Christian on Oct. 19 and Toronto on Nov. 2. The last road game is at Madonna on Oct. 26, which has been switched to a noon start instead of 7 p.m.

“We stayed pretty healthy in the Caldwell game,” Agresta said. “There are the normal bumps and bruises, but we should have our full complement of players on Friday. We’re in for a challenge, but our guys will be ready.”