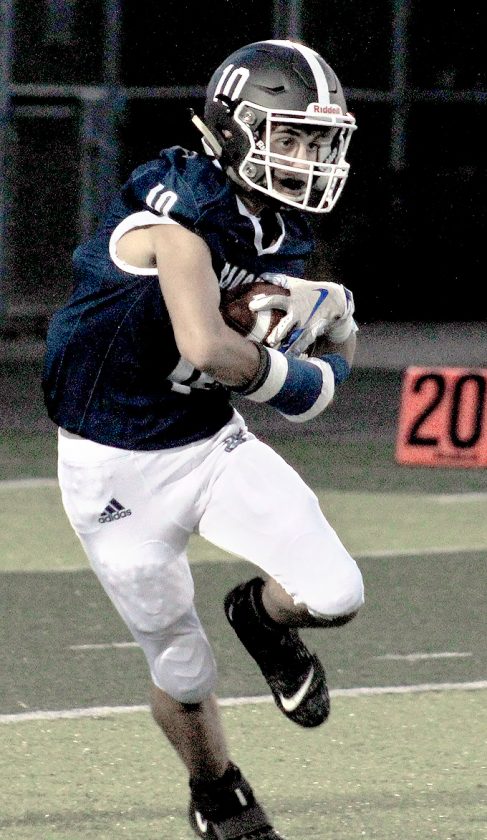 WEIRTON — The Madonna football team heads into the second half of the 2019 season feeling pretty good about itself with a 4-1 record and an 11th-place bid in the Class A rankings.

The Blue Dons will get into the second half of the season Friday night in Morgantown when they travel to play Trinity Christian, a team that is in its first season back into football after a hiatus of several years. The Warriors are 2-2 but haven’t played in two weeks after forfeiting the Sept. 20 game at the Maryland School For the Deaf and having a bye last week.

Trinity was a late addition to the Madonna schedule after Clarksburg Notre Dame could not field a football team this year. Madonna Athletic Director Michael Arlia said he was fortunate to pick up a game to fill the vacant spot in the schedule. Game time Friday on the Trinity campus is 7 p.m. It is the first of three straight on the road for the Blue Dons.

“We don’t have any recent film on them, so there is a bit of the unknown with them,” Blue Don coach Darrin Hicks said. “They haven’t played for the past two weeks. Their last game was the week we played Strasburg-Franklin, and they also played a team out of Ohio, Fairport Harding. Fairport is a pretty good football team and beat Trinity 50-0.”

Prior to that game, though, the Warriors defeated Mapletown, Pa., in the season opener, 38-34, and came back the next week with a 42-0 win over Hannan.

“I imagine they are going to put their best foot forward against us,” Hicks said. “We’re going off of dated information, so we’ll have to be ready for just about anything. From what I have seen, they have some talented kids and are pretty well coached. They’re solid overall.

“They have a couple of running backs, and their quarterback has a good arm and showed in the early games that he’s not afraid to pull the ball down and run. Trinity is pretty good with what they have.”

The Warriors have four seniors on their roster, along with five juniors, three sophomores and eight freshmen. One of the freshmen, Davon Eldridge (6-foot-0, 185 pounds) is one of the running backs and is a physical runner, according to Hicks. Eldridge also starts at defensive end.

Hicks said Trinity, like most small schools, has a lot of players going both ways, but they run well to the football on defense.

“This is their first season of football in awhile, and they have only one on-field loss,” Hicks said. “That’s pretty good. They play a lot of freshmen and sophomores. I think the future is bright for them, and their program is on the rise.”

Last week, the Blue Dons played field position football in their 13-6 win over Cameron and took advantage of a couple of situations.

One of the things Hicks has been taking advantage of the last few weeks is the passing combination of sophomore Santino Arlia to 6-3 senior Brennan Secrist. They clicked for six completions last week for 47 yards and a touchdown. That came after lighting up the scoreboard in 34-0 win two weeks ago over Mathews when they combined on eight passes, totaling 55 yards and two scores.

Arlia had a personal best against Mathews, throwing the ball 41 times for 364 yards with five touchdowns. The performances the past two weeks have pushed Secrist into first place among all receivers in the 11 schools within the Herald-Star/Daily Times coverage area. He has 28 receptions for 262 yards and six touchdowns. Arlia is second among quarterbacks with 960 yards through the air. He has completed 87 of 147 aerials with 11 touchdowns.