Big Red hits the road for important game with Dover 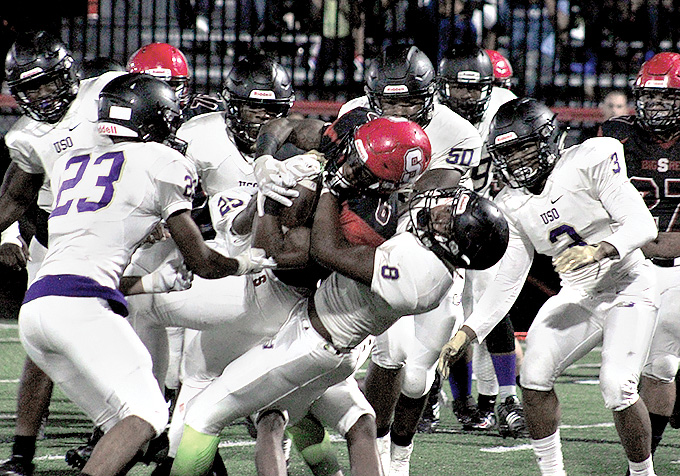 “Big Red is Big Red,” he said. “They are extremely well coached, physical and athletic. They are a big challenge for us. We enjoy the battles and the excitement the game brings.

“We learn a great deal about ourselves after each game. Reno (Saccoccia) and his staff prepare their kids as good as anybody and better than most. The game is vintage Ohio high school football.”

The 23rd all-time meeting between the schools will kick off at 7 p.m. inside Crater Stadium. Big Red, which will be playing its first road game of the season, holds a commanding 17-4-1 series advantage.

Both teams are 4-1, and Friday’s winner will pick up a boatload of computer points. Big Red is rated fifth in this week’s Division III, Region 9 standings, while Dover is eighth. New Philadelphia leads the region followed by Streetsboro, defending Div. III champion Chagrin Falls Kenston and Aurora.

Dover is the ninth school in Ohio history to reach the 700 victory mark. In addition, the Tornadoes joined Big Red as the only two high schools in the state to win at least 700 football games, 1,400 basketball games and 1,000 baseball contests. Ifft, who notched his 200th coaching victory in 2018, has been part of the program’s 500th, 600th and now 700th victories.

“I have no reservations about saying this — Dover has the most well-coached passing game of anybody we see during a season,” Saccoccia said. “We just have to be ready for them.

“Coach Ifft does a great job with his program. His teams are always well coached and well prepared. We need to be ready mentally and physically.”

Dover’s passing game is now run by sophomore quarterback Ayden Hall (6-foot-3, 160 pounds). He threw for five touchdowns and ran for another in the rout of Bishop Timon-St. Jude.

“He’s getting better every week,” Saccoccia said of Hall. “You can see he is getting more confident, and he’s running the ball a lot more. Dover’s coaching staff has done a very good job of bringing him along.”

Hall has a number of talented receivers to look for when putting the ball in the air. Junior Nathan Ravine caught four Hall passes for scores in Week 5. Other receiving threats are junior Jacob Hostetler, senior Oshea Williams, senior Tyler Sweitzer and senior Kade Ruegsegger, who stands 6-4 and weighs 175.

“We are a team that has taken some time to find its identity,” Ifft said. “Each year, every team brings with it strengths and perceived weaknesses. We spend the early part of the season working our way to becoming the best we can. This year has been no different.

“We are healing up a bit from early season injuries and believe we have found the right personality offensively, defensively and with special teams. We are improving every day. That being said, I do not believe we have faced an opponent like Big Red to date.”

Senior tailback Tayveon Crawford had another strong performance, rushing for 213 yards and four touchdowns. He now has 923 yards on the season to go with 13 scores.

Big Red’s offense is averaging 35 points per game, 326 rushing yards and 115 yards through the air. The defense surrenders 21 points an outing, just 56 yards on the ground and 203 via the pass.

“When you put it all together, they are the best we have played,” Ifft said about Big Red. “Their most recent film shows an added intensity. They are playing with a renewed sense of purpose since their setback. I see a different team from Week 4 to now.

“That is the sign of a championship program. Adversity has made them better. We will need to play our absolute best game and better than we have thus far. That being said, we look forward to the game and testing ourselves against one of Ohio’s best.”

Saccoccia said in order for Big Red to be successful, it must go back to the old philosophy of stop the run and tackle the pass.

“We have to do that because you’re not going to stop both against Dover,” he said. “We need to stop the run and tackle their receivers after catches — we can’t give them any extra yards. The most important thing offensively is to stay away from the penalties and be patient with the running. We need to realize 3 yards is a win.

“Right now, we’re working hard to get better. We’re focused on taking care of the little things because they have been hurting us lately. It’s nothing major, but it’s the little things. Defensively, we must be gap sound and get them back in the huddle. Offensively, we need to stay on track, be patient and have no self-inflicted wounds.”