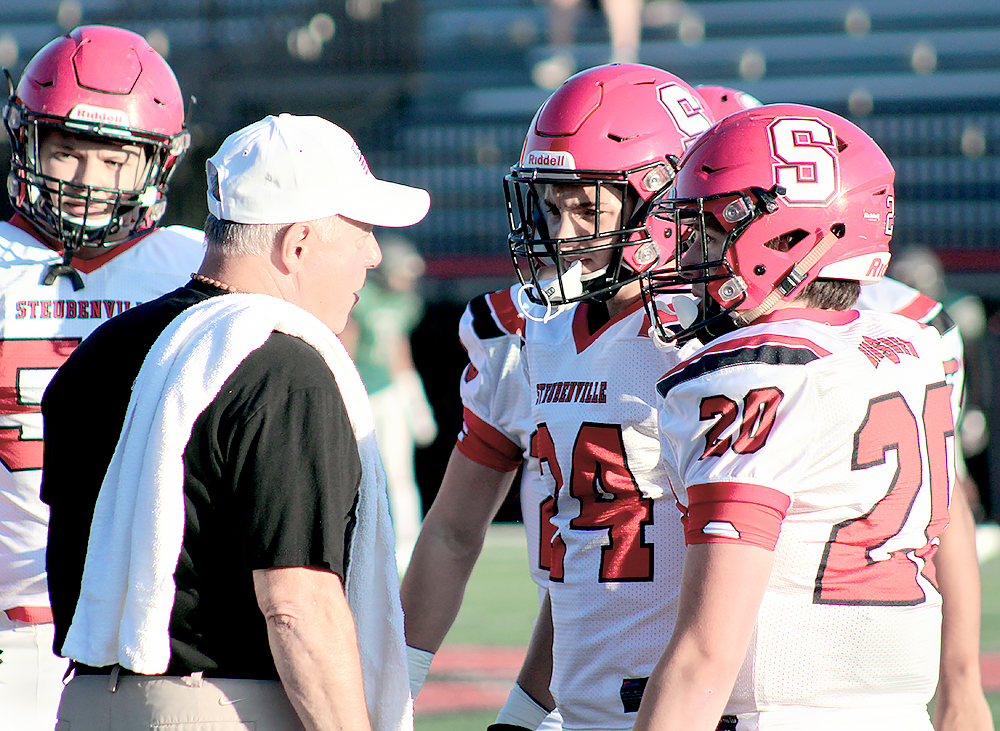 The kick for the first meeting between the 5-1 Big Red and the 4-1 Eagles, who call Fort Washington, Md., home, is set for 7 p.m. inside Harding Stadium.

“As far as size, speed and athleticism, I haven’t seen a team like this in a long, long time,” Big Red coach Reno Saccoccia said. “They are the full package.”

In just its seventh year of football (the school played a JV schedule in 2012 and got its varsity program going in 2013), National Christian has designs on becoming a national powerhouse. Before it launched a grid program, NCA had been best known for basketball, producing among others NBA star Kevin Durant.

Coach Andre Kates, who graduated from Indiana University and had a short stint with the Baltimore Ravens, took over in 2015. He has 11 major college recruits on his roster. The Eagles own victories over Pittsburgh Imani Christian (70-0), Hagerstown, Md. St. James (33-0), Royalty Institute, located in Landover, Md. (38-0) and Riverdale Baptist from Upper Marlboro, Md. (43-6). The loss came last week to St. Thomas More, based in Oakdale, Conn., 42-41. The Eagles went for a two-point conversion at the end of the game but failed.

“This is just a very, very solid football team,” Saccoccia said. “It’s basically an all-star team from the Washington area.”

Senior Jalen Lea (5-foot-11, 180 pounds) is in his second season as NCA’s starting quarterback. A season ago, he threw for 1,391 yards and 12 touchdowns, while running for two additional scores. Heading into the Thomas More contest, he had passed for 449 yards and seven six-pointers.

He has a host of talented receivers to look for, led by senior E.J. Core (6-1, 207). He leads the Eagles in receptions. Others to watch for are Cameron Sikes, Devin Morrow, Michael Roundtree and Martino Dennis, all seniors.

NCA’s offensive front has plenty of size and skill. It’s led by senior tackle Aaryn Parks (6-5, 296) who has committed to play at Oklahoma. On the other side of the line is Tim Lawson, a 6-5, 278-pound senior who is heading to Louisville. Parks is rated as the No. 5 recruit in the country at his position.

“Basically on offense, they’ve been doing whatever they want to do,” Saccoccia said. “They like to run, but they also throw it well. They are very wide open. The left tackle is going to Oklahoma and the other one to Louisville. That’s impressive. They have three starting linemen back from last year.”

Two starters in the NCA defensive secondary have given verbal commitments to Div. I schools. They are Joshuah Moten (6-1, 177) who is committed to Texas A&M and Teylor Jackson (6-0, 207), an East Carolina commit,

“I’ve been even more impressed with their size and speed on defense,” Saccoccia said. “They have their entire front four back from last year. Their linebackers and defensive backs all have great speed. Like I said, this is just a very solid football team.

Big Red moved to 5-1 thanks to its 42-20 road victory at Dover. Tayveon Crawford continued to pace the offense, as he ran for 325 yards and three more touchdowns.

For the season, Crawford has 1,248 yards on 178 attempts (an average of 7 yards per trip) and 16 rushing touchdowns. Randy Mitchell continues to be efficient for Saccoccia’s crew, completing 65 percent of his passes for 674 yards and six scores.

Offensively, Big Red averages 448 yards per outing and 37 points. The Big Red D surrenders 254 yards and 21 points per game. Of the yardage total, just 43 comes from the ground game.

“I was pretty happy with the way things ended up in the Dover game,” Saccoccia said. “We only had four penalties, so that’s an improvement. We just have to eliminate turnovers, period. We just can’t have them anymore.

“I was happy with our enthusiasm. We are getting better physically. I think we played our best game of the year last week, and it took that to beat a team like Dover.”

¯ Big Red is fourth in the official Division III, Region 9 computer standings released earlier this week by the OHSAA. New Philadelphia continues to lead the region, followed by Streetsboro and Chagrin Falls Kenston.

¯ After the NCA game, Big Red will have just two contests remaining thanks to its Week 8 bye. Saccoccia and company will travel to Columbus on Oct. 25 for a date with DeSales, currently 5-1, before closing at home with currently unbeaten Linsly. DeSales is fifth in the Division II, Region 8 standings.

¯ If NCA was located in Ohio, it would be a Division VII school.

¯ The Eagles will return to the Buckeye state on Nov. 1 to test Lakewood St. Edwards.

Pool, other changes discussed for park

EGCC making plans for the future