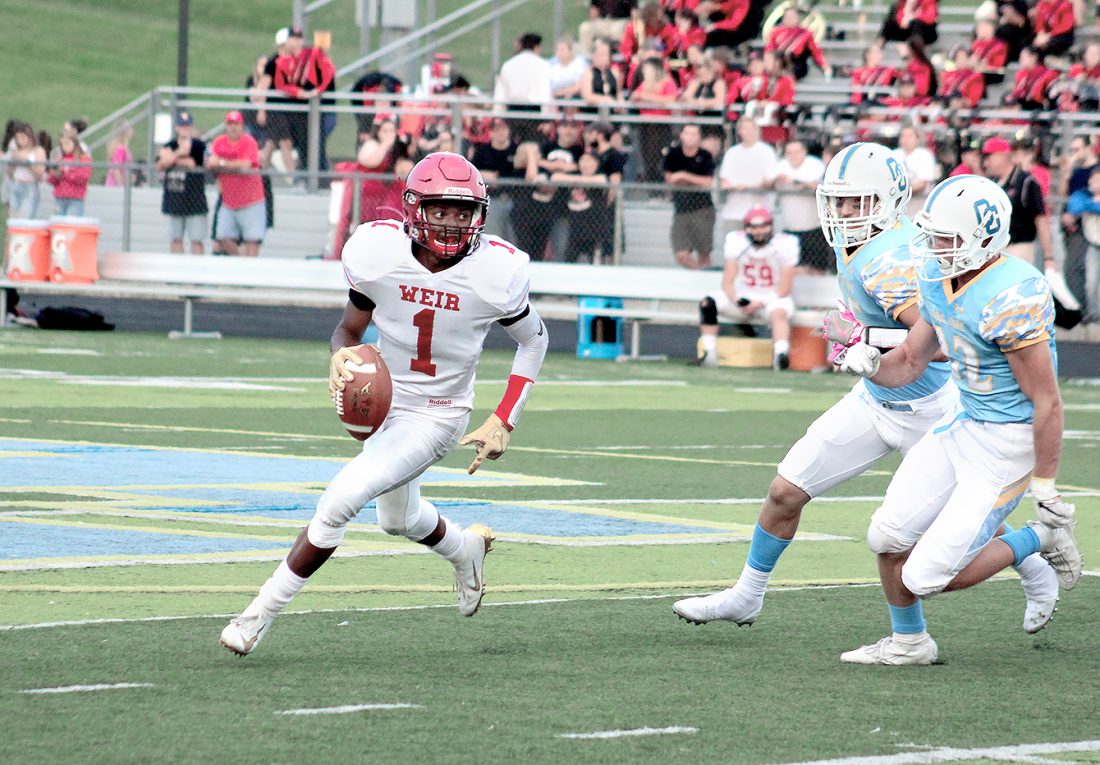 WEIRTON — For the first time in six years, the Weir High football team will go into the second game of a season seeking its first victory.

The Red Riders head south to Moundsville on Friday to resume an old rivalry with John Marshall, which also went down in its season-opener last week. The opening kick is at 7 p.m.

It is the resumption of a series that began in 1968 when the Marshall County school opened, following a consolidation of county high schools. Weir High defeated the Monarchs from 2015-17, but the teams didn’t play in 2018.

“It’s a good rivalry, and we want to play the better teams,” said veteran Red Rider coach Tony Filberto. “Look at our schedule — it is loaded with good teams. I’m not complaining because it is the type of schedule I always want to play. My belief is that when you play a better schedule, it can only make us better. John Marshall is AAA, and I wanted to get them back on our schedule. I believe we have one of the toughest schedules in Class AA in the state, and that’s the way we like it.”

While the Red Riders were losing to Hancock County rival Oak Glen, 34-14, last Friday, the Monarchs went down at the hands of University in Morgantown, 18-7.

“John Marshall is a darn good team,” Filberto said. “They are big and have massive numbers, which if we have a shortcoming this year it is in our numbers. They are not only big, but also physical. We definitely have to play better than we did last week.

“Oak Glen played well, and we didn’t play well. We know that. We didn’t coach well. I thought we did a poor job in preparation, and there are a lot of things the players could have done better and a lot of things the coaches could have done better. After a loss, we’re very critical of ourselves — and rightfully so — but Oak Glen played better than we did, bottom line. I don’t believe that game is an indication of our football team at all.”

Turning his attention back to the upcoming game, Filberto said the Monarchs like to run the football.

“They are a very basic football team,” he said. “They’ll give you a lot of things to deal with, but their main scheme is basic, and they do it well. They are normally a two-back football team in the I formation, which they have used the past few years. They will run the football at you with play option. Their quarterback (Justin Frohnapfel) will be under center most of the time and is a capable passer, but their main threat is the run.”

The leading rusher last week for coach Jason Willis’ Monarchs was tailback Derrick Derrow, who tallied 97 yards on 15 carries but was injured in the fourth quarter and may not be available this week. Fullback Dalton Flowers lugged the pigskin seven times for 49 yards against the Hawks.

Frohnapfel passed the ball 26 times, completing 10 for 110 yards but had two interceptions. Frohnapfel ran with the ball 13 times for 46 yards and the Monarchs’ only touchdown.

The Monarchs are basic on defense, too, Filberto said.

“Defensively, John Marshall plays a basic 4-3 defense,” he said. “They will have seven players in the box and out-number you on the run. If they are successful, you have to throw the football. “

Against Oak Glen, the Red Rider rushing wasn’t up to the standards that Filberto’s teams have had in the past. Weir High ran the ball 32 times for 125 total yards. Junior quarterback Anthony DiMatteis, who was making the first varsity start of his career, led the ground game with 69 stripes on 18 carries. He scored the only two Red Rider touchdowns with runs of 8 and 5 yards.

Filberto said his team would put the ball in the air more than in the past and they did last week. DiMatteis completed 9 of 23 passes for 139 yards and three interceptions. Because of heavy defensive coverage by Oak Glen in the secondary on all-state candidate Sebastian Spencer, he was able to complete only one pass to him.

“I thought Anthony threw the ball well,” Filberto said. “Some balls we didn’t catch, some balls we did, but I thought overall he did a very good job. You’re going to throw interceptions, and you’re not going to catch the football. That’s part of football, but those things are more glaring when you lose than when you win. I’m sure that today if we had won the game we wouldn’t be as critical of ourselves as we are right now.”

Filberto added that the Red Riders started Monday correcting the mistakes made in the Oak Glen game.