Playoff implications on the line Friday 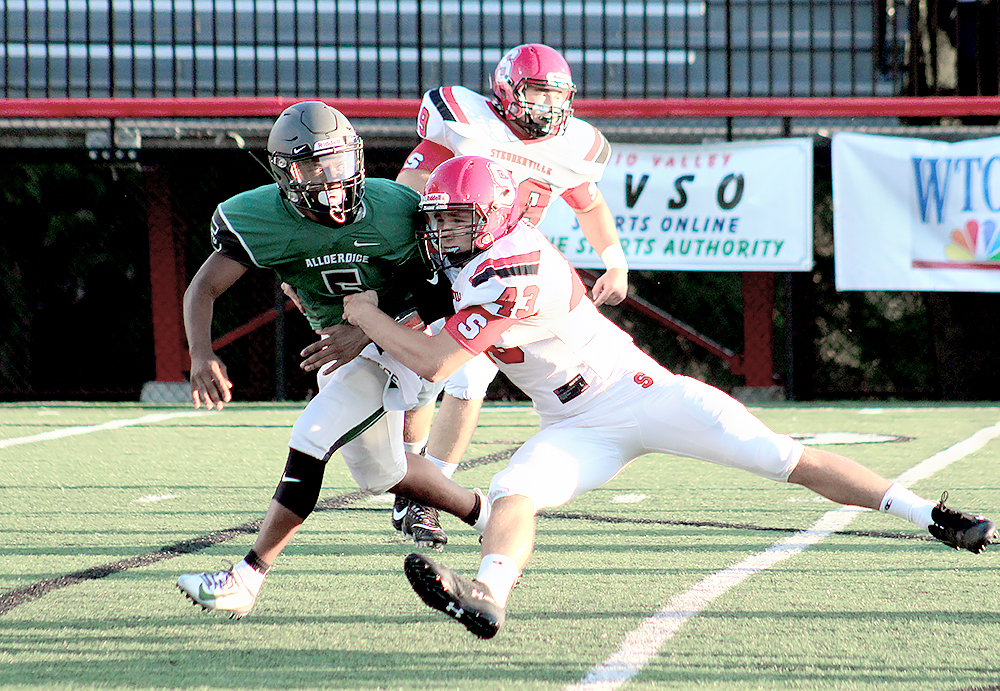 STEUBENVILLE — Plenty of playoff points will be on the line Friday when unbeaten New Philadelphia and Big Red get together inside Harding Stadium.

Last season, Big Red earned a 56-39 victory at Woody Hayes Quaker Stadium. The teams combined for more than 1,000 yards of offense. Steubenville finished with 672 (591 on the ground), as Tayveon Crawford rushed for 307 yards and a pair of touchdowns.

“This a veteran and talented team with a veteran and outstanding coach (Matt Dennison),” Big Red coach Reno Saccoccia said. “The Dennison family are lifers in the coaching profession, and they all have done an outstanding job.

“They have a bunch of good players, not just their quarterback. They feature a hard-running tailback and three outstanding receivers. They also have a tight end that does a good job. Their offensive line is a veteran bunch and very solid. They have three good wins under their belts. This game represents a really big challenge for us.”

Matt Dennison, who doubles as the New Philly athletic director, is the son of Jim Dennison, the legendary coach at Akron and Walsh. Matt’s brother, Gregg, is the head coach at Medina Buckeye after previously serving at Wadsworth.

Jim Dennison retired in 2012 after 53 years as an administrator and 31 as a coach. He spent 18 years as the first and only head coach of Walsh’s football program. He coached the University of Akron from 1973-1985 and is the winningest coach in program history. Dennison was an offensive coach when Saccoccia played for the Zips.

May, who has verbally committed to continue his football career at Eastern Michigan, is off to a fast start. The 6-2, 190-pound dual-threat senior has thrown for 575 yards and rushed for 329 more. As a sophomore, he became the first player in New Philadelphia history to rush and pass for more than 1,000 yards in a single season. In 2018, he threw for a school-record 2,029 yards, becoming the first Quaker signal-caller to pass the 2,000-yard mark in a season.

He is surrounded by plenty of weapons in the form of Jent Joseph, Sam Zemis and Austin Kohl. Joseph had seven catches for 151 and a pair of scores against Big Red in 2018. Zemis, meanwhile, hauled in six May aerials for 149 and three touchdowns.

In the victory against Struthers, Joseph had eight grabs for 144 yards. John Sciarretti powers New Philadelphia’s rushing attack. Against Marlington, he carried 15 times for 111 yards and five touchdowns. The tight end Saccoccia mentioned is Mitchell Stokey.

New Philadelphia considered last week’s trip to Marlington to be one of its bigger games of the season, with Friday’s visit to Steubenville also right up there.

“The guys had kind of circled these two games on the schedule during the offseason, and they know they have to prepare hard and execute to compete with teams like (Marlington and Steubenville),” Dennison told The Times Reporter. “We look forward to the next challenge in a great environment next week.”

In compiling its 3-0 record, Big Red has averaged 37 points per game, 354 rushing yards and 125 yards through the air.

Crawford has toted the pigskin 84 times for 528 yards and six touchdowns. Sophomore Rodney James Jr. has turned his 11 carries into 190 yards and a couple of scores.

Senior quarterback Randy Mitchell is completing 64 percent of his passes (27 of 42) for 376 yards and four scores. Senior Stone Biacco leads Big Red’s receivers with 12 catches for 187 yards and two touchdowns. Meanwhile, senior Luke Zorne has six receptions for 77 yards and a six-pointer.

Defensively, Big Red is surrendering 51 yards per game on the ground, 195 through the air and 21 points a game.

“This is the kind of game that you start winning on Tuesday and Wednesday,” Saccoccia said. “You just can’t wait until Friday. You have to be focused and have a burning desire early in the week to get better

“Then, you have to stay focused on what you need to do in order to improve. That has to happen from top to bottom — from the coaches all the way down. Everyone must want to improve.”

As he prepares his troops for the game, Saccoccia said he doesn’t necessarily see a repeat of last year’s offensive shootout.

“I don’t think either team was prepared for what took place last year,” he said. “I think both teams are preparing this week to stop what the other team does the best.”

¯ Prior to Friday’s kick, Big Red will honor members of its 1984 Ohio Division II championship team. On Nov. 23, 1984, Big Red earned a thrilling 12-9 overtime victory over Columbus Whitehall-Yearling to become the first area Ohio squad to earn a state championship on the playing field. The win capped a 13-0 season. “We’ve had a lot of special teams at Big Red under Punque Cartledge, Ray Hoyman and Abe Bryan,” Saccoccia said. “We also had the playoff years under Bob Hedmond, but our 1984 team set the standard by winning a championship on the field. We had won AP and UPI titles before, but in 1984 — we won it on the field.”

¯ The game will be New Philadelphia’s first against an OVAC opponent. The Quakers and Dover were added to the conference earlier this year.