Little by little for Big Red

Steubenville preps for another first meeting 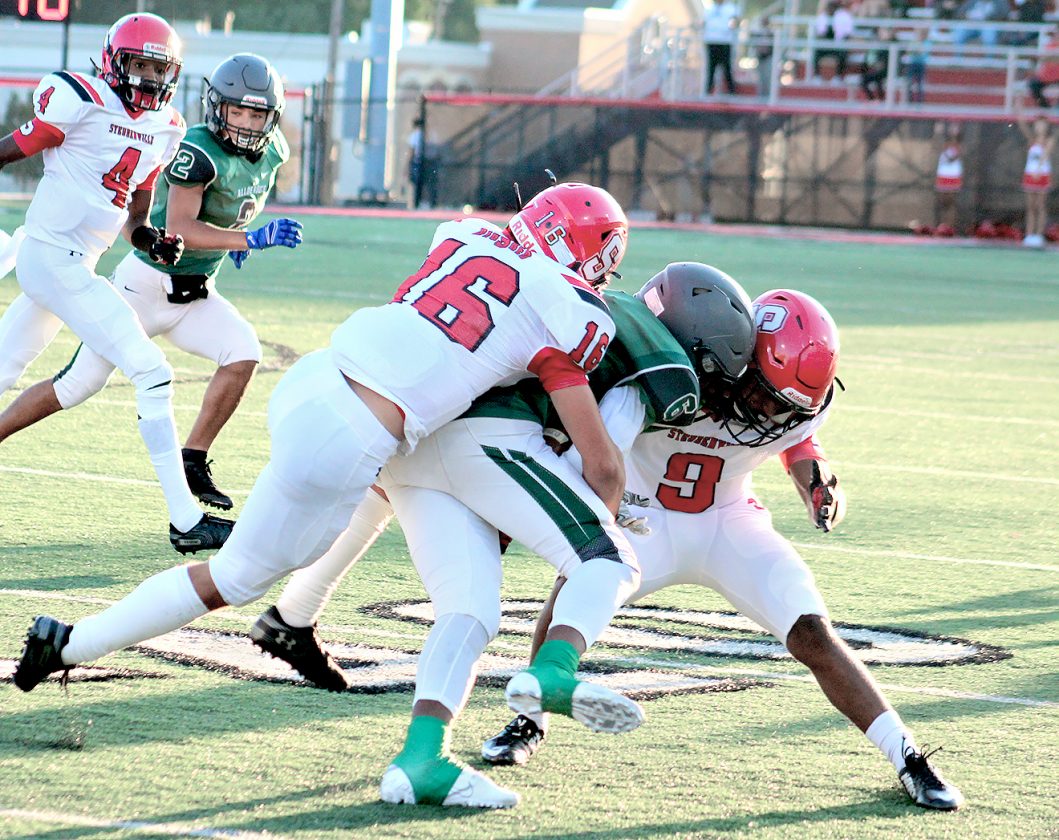 STEUBENVILLE — Reno Saccoccia and his Big Red football team are focusing on the little things this week, as they prepare for Friday’s contest with Washington, D.C., Woodson.

Steubenville opened the 2019 campaign by rolling to a 42-7 victory over Pittsburgh Allderdice. Big Red put 15 points on the board before the visiting Dragons had an offensive snap.

“As far as effort and determination are concerned, I was pretty happy after the Allderdice game,” Saccoccia said. “There are still a lot of little things we need to work on, and that will be part of focus in practice this week.”

Friday’s kick is set for 7 p.m. inside Harding Stadium.

“They have just a ton of athleticism,” Saccoccia said when discussing the Warriors. “They got off to a bad start offensively and defensively against Martinsburg, which is a very good football team. After Martinsburg scored, Woodson fumbled on its first offensive play, so they were down 14-0 early.

“This is a just very athletic team. Even their bigger players are athletic. The offensive line is very well coached and fundamentally sound. They are multiple on defense. Woodson will pose challenges for us on both sides of the football.”

The Warrior offensive attack is led by senior quarterback Jordan Sharp (6-foot-3, 200 pounds). He led a Woodson offense that outscored opponents 283-193 a season ago. The Warriors started the year on a three-game losing streak (they opened with Martinsburg and Canton McKinley) before going 10-4 and going two rounds deep into the playoffs.

Woodson captured the D.C. Interscholastic Athletic Association championship and has posted winning records in each of the last eight seasons.

Chris Roberts, a 5-11 senior, gets the bulk of the carries in Woodson’s ground game. Another senior, Jacob Nabinett, also will get some totes.

When Sharp puts the ball in the air, he looks for seniors Arthur White and Denzyl Hunnicutt, along with junior Malik Loggins. White is a 6-1, 180-pound speedster.

Keyshawn Hunter is a standout on the offensive and defensive lines for Woodson. He has committed to play at Old Dominion. He is joined up front offensively by Darryl Mabry, Wayne Monk, Jevon Seay and Jalen Jacobs. The interior of the Woodson line averages 265 pounds per player.

Ke’Von Hunter is the leader in the secondary and is drawing interest from several Division I schools.

“No question Woodson has talent all over the field,” Saccoccia said. “They are balanced offensively, and Sharp has a strong arm. They play a difficult and demanding schedule year in and year out, and I’m sure they’ll be ready for us when they arrive here Friday.”

In the Allderdice game, Tayveon Crawford, Big Red’s senior tailback, rushed for 198 yards on 21 carries and two touchdowns. An All-Ohioan as a junior, Crawford turned his first touch of 2019 into a 46-yard touchdown. Crawford and his offensive mates finished with 548 total yards (451 coming on the ground and 97 through the air).

Senior quarterback Randy Mitchell completed 7 of his 11 passing attempts for 97 yards. He connected with fellow senior Stone Biacco for a 57-yard touchdown. Biacco hauled in four Mitchell passes for 85 yards.

Big Red’s defense got off to a stellar start, limiting Allerdice to just 50 yards. The 17 Dragon rushing plays resulted in negative yardage. It did collect 59 yards passing. The only touchdown surrendered came on a kickoff return.

“As I said, overall I was pretty happy,” Saccoccia said. “We made some mistakes early in the second half. We have movement on the offensive line that hurt us, and we gave up a few big plays defensively and on special teams. We have to tighten up in those areas.

“Every mistake we made against Allderdice can be fixed with more focus — that’s the important thing. When it comes to improvements, we look for big improvements every day in practice, not just week to week in games. We have veterans at some positions and are very young, inexperienced at others. Sometimes your inexperience can bring enthusiasm, and enthusiasm can be a great thing as a team works to get better and better.”

¯ On Friday, the Big Red Boosters Club will hold the 35th-annual Legends Night event. Senior members of the 1992 team will be honored. Thirteen of the 17 seniors have indicated they will attend.

The boosters will hold a dinner in Harding Middle School and the former players will be introduced prior to kickoff.

“A great bunch of guys who worked really hard,” Saccoccia said about his 1992 squad. “It was just kind of an odd season. The team did have one of the best backs we’ve had here in Tyrone Roseberry.”