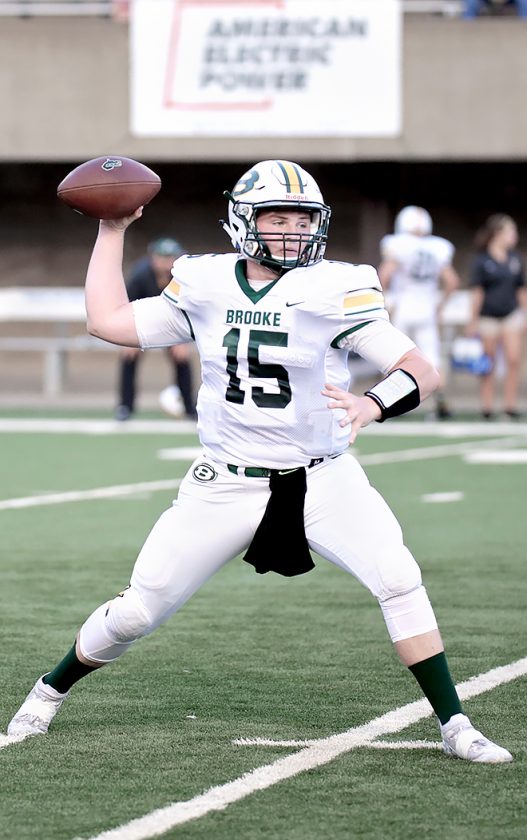 Now, it’s time for the Golden Bears to build off of it.

“It’s kind of like coming back to Earth,” Arneault said. “We reviewed film (Monday) on some of the mistakes we made and focused on position and technique work. We’re getting everyone’s head back on straight. I saw a lot of focus in the kids’ faces. They want to get back at it.

“(Beating Weir) was our goal going into that week and all summer. Now it’s time to move on. We’re playing Philip Barbour, but our opponent is also ourselves because we have to make sure we’re doing everything we need to go to get better.”

Philip Barbour, a 30-6 loser to Grafton in Week 1, is a new opponent, but Arneault has a bead on what they do.

“They are an option team and are pretty run-heavy,” Arneault said. “They play a basic 4-4, Cover 3 concept on defense. They are going to be a bend-don’t-break type of team. They’re a much different type of team than Weir High.

This week, it faces another, as it opens Buckeye 8 conference play at East Liverpool.

“They are a very good football team,” Indian Creek head coach Andrew Connor said of the Potters, who blew out Cleveland JFK in Week 1. “I think it’s one of those programs that is progressing in the right way. Each year they get better and better. Coach (Josh) Ludwig is an East Liverpool guy, and he loves the place. They found the right guy to lead them.

“The first conference game is very important. You don’t want to fall behind in the standings.”

As for what to expect, Connor knows the East Liverpool defense will be stingy.

“They haven’t given up a score yet,” he said. “They’re aggressive, they get after it and they tackle well in space. It’s going to be challenge to try and move the ball against them.”

Leading the Creek offense against that defense will be Sam Mazar, who used his feet more than his arm to beat Cambridge, rushing for 57 yards and three scores.

“I think he did a good job managing the offense and ran the ball very well,” Connor said. “There are things we have to do better. Our consistency level has to be better. He did a good job of putting us in the right positions, and we scored four touchdowns.”

HEDGESVILLE — In Week 1, Brooke was able to hang around against a really good Wheeling Park team until the game got away in the second half.

This week, the Bruins will look to put a full 48 minutes together with a long trip to Hedgesville.

“I think we just ran out of gas,” Brooke head coach Mac McLean said of Week 1. “I think anyone who picked up the Sunday paper and saw the score didn’t think it was a good showing, but I felt good about how we played at times in the first three quarters and how we represented ourselves. We made enough mistakes to lose three football games.”

McLean expects Hedgesville, who dropped its opener 34-30 to Washington, to be a lot like the Bruins.

“I know they look a lot like we were last year and continue to be — they look young,” he said. “I know some players left their roster and transferred out. I think they expected to have a big year down there and need the W. They’re a lot like the team of green and gold, they need a win.”

For McLean, the keys are the same — “don’t beat yourself.”

“We have to execute, we have to protect the ball and we have to limit penalties,” he said. “I think how we handle a big road trip early in the season is going to be important. We’re going to be on a bus for three-and-a-half hours and eating on the road. We’re going to have to be mature enough to handle the challenges that come with that.

“Getting away from home does give a little bit of independence with not as many familiar eyes on you. There’s one focus, and that’s the game.”

WELLSVILLE — Coming off a tough season-opening loss to Southern Local, Edison head coach Shane O’Brien had a simple message for his team — get back to work.

“The message is put that behind us and get back to work,” he said. “We have to get back on the process.”

It looks to do that Friday night at Wellsville, a 26-15 winner over Toronto in Week 1.

In order to stop the Tigers, O’Brien knows the Wildcats will have to contend with an athletic offense.

“They’re very athletic and very fast. Containing their speed is going to be a challenge for us,” he said. “Other than that, I like how we match up. They seem pretty similar to last year.”

One of the biggest reasons for that added athleticism is Justin Wright, a state track champion who joined the football program. He had a 93-yard scoring run against the Red Knights.

“They are more athletic and faster overall as a team. He’s definitely a concern of ours, keeping him contained and keeping him between the tackles is a priority for us,” O’Brien said.

Another thing that gave Wellsville success against Toronto was forcing turnovers.

“We’re definitely taking more steps to try to prevent turnovers,” O’Brien said. “I think that’s going to be a big key to the game. We’re going to try to keep the ball away from their safeties who obviously know how to make plays.

YORKVILLE — In its season-opening loss at Barnesville, Buckeye Local head coach Roger Herbert was happy with how his team’s defense gave it a chance to hang around. Now, the focus is getting the offense going against Union Local on Friday night.

“It’s kind of like our broken record, our first drive we drove down to the 12 and fumbled. We had a couple of drives start with false starts and dead ball penalties,” Herbert said. “It’s us beating ourselves. I thought the defense played pretty well. We had 14 plays on offense in the first half. That’s not going to get it done.”

Last season, perhaps the Panthers’ best chance to win came against the Jets as they led at times in the second half.

“Last year we were leading late in the game there and maybe let one slip through our hands,” Herbert said. “The kids have some extra motivation to finish this one.”

The Jets, who lost 21-0 to Monroe Central in Week 1, have a lot of familiar faces to Herbert, who used to be an assistant at Union Local.

“Honestly we try to prepare for everyone the same,” Herbert said. “It is kind of neat, I was looking at the staff and I’ve coached with everyone on the staff. It’s nice to see faces and people I’ve known my whole life, but we watch the film like it’s anyone else.”

As for this year’s Jets team, Herbert has an idea of what to expect.

“They are a young team,” he said. “They’ve had some injuries. They like to spread the field and they have several guys they are going to try to get the ball in space. They have a purple young linebackers that fly around.

“They’ll be well-coached and well-prepared. We have to go play our game.”