Crusaders hit the road for tough matchup against Wheeling Central 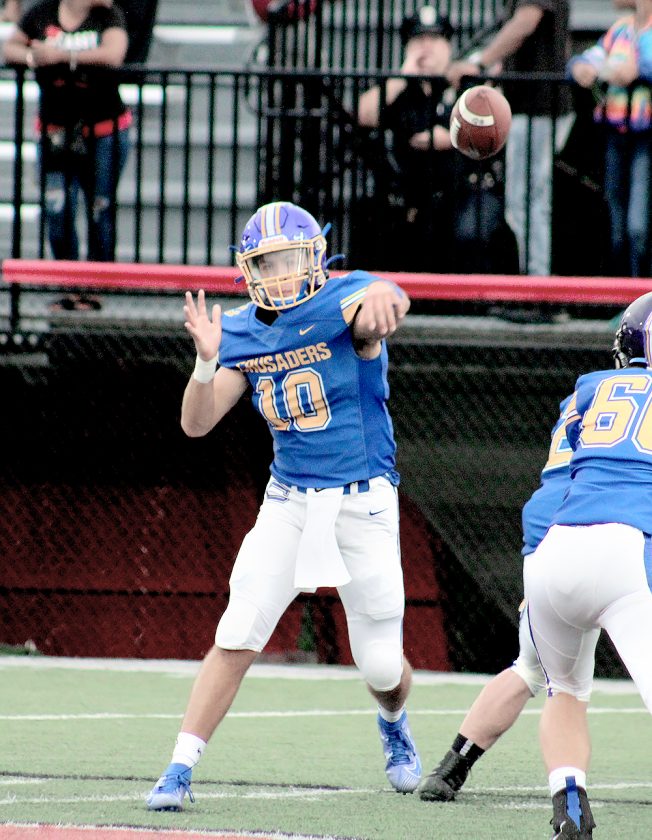 THROUGH THE AIR — Catholic Central’s Ryan Gorman attempts a pass against Columbus Africentric on Saturday. The Crusaders hit the road for the first time this season for a Friday matchup against Wheeling Central. -Joe Catullo

WHEELING — Mike Young couldn’t have asked for a better opening to the 2019 grid season.

The Wheeling Central head coach guided his Class A No. 1-rated Maroon Knights past No. 2-rated Williamstown, 35-13, last Thursday at Wheeling University.

The impressive triumph was fueled by an exceptional performance by Curtis McGhee III. The senior quarterback totaled 360 all-purpose yards, throwing for 229 yards on a 14 of 23 effort to go with 131 rushing stripes. The Brown University recruit had a hand in four TDs.

Now, the Maroon Knights and Crusaders are primed to square off Friday at Wheeling University in a 7:30 p.m. start.

“We put points on the board and did some real good things,” Young said. “With that said, there are some things we still need to work on. I was happy with the adjustments the coaches made on the go and how our kids responded.

“Curtis and Jalen (Creighton) both had big games. Jalen was an unsung hero for us last year. It’s a long season, so we need other players to make plays. The big thing is we came out of the game injury free.”

Junior dandies Payton Marling and Jordan Waterhouse carry much of the load for the Knights’ ground attack.

Catholic Central, meanwhile, had a much tougher time against the athletic and speedy Nubians. Jeffrey Dawson keyed the Crusader offense, rushing for 142 yards and two TDs on 21 carries. Junior quarterback Ryan Gorman was solid in his first varsity start, passing for 126 yards. He rushed and passed for a TD.

“It feels good to win my first game at a school with such a great football heritage,” Agresta said. “We beat a good team in Africentric. They are really athletic and play a big-time schedule.

“It was your typical first game. There are a lot of things we need to clean up. I didn’t get the job until this spring, so we got a late start. But, the kids are beginning to pick up things.”

Young, bidding to lead the Maroon Knights to a third successive state crown, foresees a stiff test against the Crusaders.

“Steubenville Central is very aggressive and physical,” Young said. “They had some young kids step up and perform well. They beat a good team in Africentric.

“We have to play good, solid defense and avoid making any turnovers. It is always a battle against Steubenville Central. We have been playing them for 50 years.”

When it comes to defense, Wheeling Central has one of the best in linebacker Adam Murray, winner of the West Virginia Sam Huff (twice) and Chuck Howley awards. He recorded 13 tackles against Williamstown.

Agresta has much respect for the Wheeling Central program and realizes the Maroon Knights present a formidable challenge.

“We have followed their program and have the utmost respect for Wheeling Central football. They are very well coached,” Agresta said. “Central has very good skilled performers with a quality offensive line. They possess big-play potential.

“We are a little nicked up right now. Hopefully, we can get everyone back for Friday. I am pleased with how my players are progressing. Right now our defense is ahead of our offense.”

Wheeling Central downed the Crusaders by a 31-14 count last fall at Harding Stadium. A year prior, Catholic Central pocketed a 35-14 triumph over the Maroon Knights.