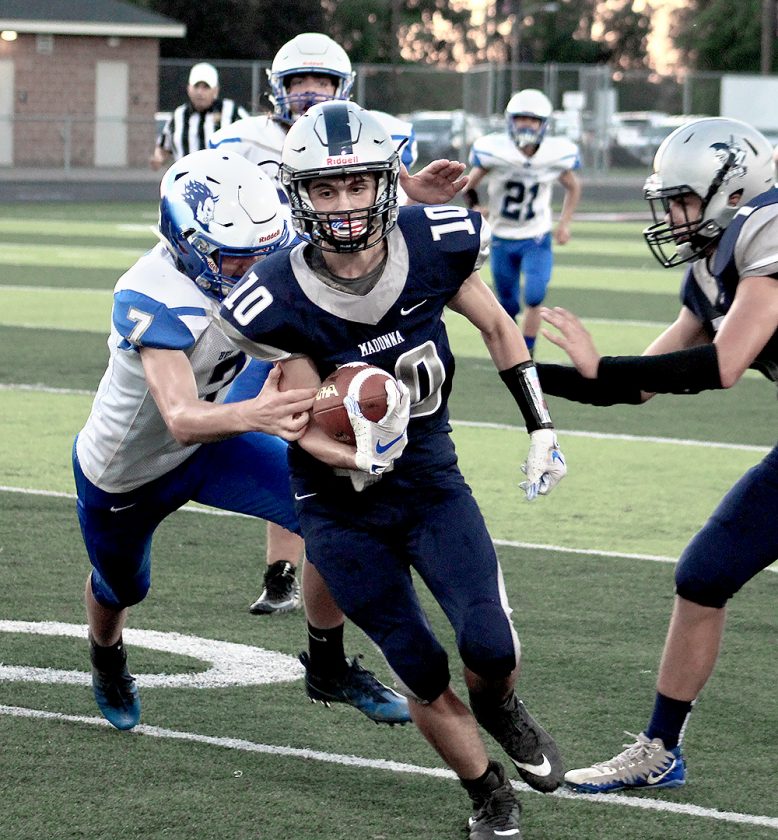 MR. EVERYTHING — Madonna’s Thomas Sessi will be looked upon to do what he did well for the Blue Dons last year — everything. (Photo by Joe Catullo)

WEIRTON — After three weeks of preseason football camp, the Madonna Blue Dons are set to open the 2019 season 7 p.m. on Saturday at Bridgeport (Ohio).

Blue Don coach Darrin Hicks said his squad got a lot of work done and came out of the camp “pretty healthy” and eager to get into the season.

“We had a lot of good stuff to work on,” said Hicks, who is beginning his fourth year at the helm. “We found out a lot about our kids.”

Hicks said the Blue Dons fared well against their three scrimmage opponents. They had a full scrimmage against Valley, and then participated against Ritchie County and Tyler Consolidated in two halves at a jamboree hosted by the River Pilots. Ritchie and Tyler both were Class A playoff teams last year.

“That was different, but it was fun and a positive experience for us,” Hicks said. “It was nice to see us compete well against playoff-caliber competition. There were a lot of positives for us.”

In 2017, Madonna and Bridgeport renewed a small-school football series that developed into a rivalry back in the early 2000s when the games were hard-fought and won by just a touchdown or less. The Blue Dons downed the Bulldogs 28-12 in the 2017 renewal of the series and prevailed again last year in a high-scoring 40-36 game at Jimmy Carey Stadium.

“We are similar-sized schools in the Valley, both with very good football tradition,” Hicks said. “It could be considered a rivalry again with the closeness of the schools. It’s only about a half-hour trip. I think it is good the schools are back playing against each other. It’s a good match-up for both teams.”

In last year’s game, departed quarterback Gavin Dietrich had a super performance to lead the Blue Dons, but sophomore running back Thomas Sessi also had an outstanding game. He carried the ball 22 times for 156 yards, with touchdown runs of 13, 12 and 11 yards.

Hicks said Sessi, who sustained a broken leg playing for the Madonna basketball team in January, will start at wide receiver. He not only led the Blue Dons in receiving last year, but he topped all receivers in the Herald-Star/Daily Times coverage area with 41 catches for 477 yards and five touchdowns.

“He’ll start at wide receiver Saturday, but he’ll also be running with the football at times,” Hicks said. “He’s going to do a little bit of everything for us.”

Hicks added that Bridgeport looks to be solid in the two scrimmage films that he viewed.

“Their coach (Fred Ray) tells me they probably will be quarterback by committee,” Hicks said. “The films show they have one quarterback that is a pretty good runner, and another that throws the ball around. I noticed on the film that Bridgeport has some very good athletes in their defensive secondary. Coach Ray is in his second year there and has done a good job.

“Their offense is in the spread with an H-back and four wideouts, but they are multiple with what they are trying to do. It will be a challenge for us to stop their talented offense.”

Defensively, Hicks said the Bulldogs have good size up front, but they are athletic and run to the football well.

“We have to make sure we take care of the football and be efficient with our drives when we have the ball,” he said.

While sophomore Santino Arlia is in his first season as the full-time Blue Don starter at quarterback, he got his feet wet a lot last year as a freshman. In addition to going into the game as a kind of designated passer, he started a couple of games at quarterback when Dietrich was nursing injuries. Arlia was effective when called upon last year, completing nearly 50 percent of his passes. He led the Blue Don passing, going 48 of 114 for 504 yards and 11 touchdowns.

Hicks said senior Roman Baird, who played for the Blue Dons as a freshman and sophomore but sat out a year ago, will get the call at running back.

Senior Jakob McCombs and junior Jacob Bonner will start at the tackles, with senior Josh Gasvoda and sophomore Nick Elias manning the guards. Senior Nathan Zaneiski gets the start at center, but senior Seth Arnold, who started his high school career at Madonna then transferred to Union High in Burgettstown where he played as a sophomore and junior, is back in Blue Don livery and will rotate in at center, according to Hicks.

“I really like the makeup of our team this year,” Hicks said. “I like the locker room. Leadership has emerged, and these guys seem to be pretty tight-knit as a group, which is nice to see. We’re meshing well together, and we can build on those types of things and have a solid season.”