Different feel in the atmosphere 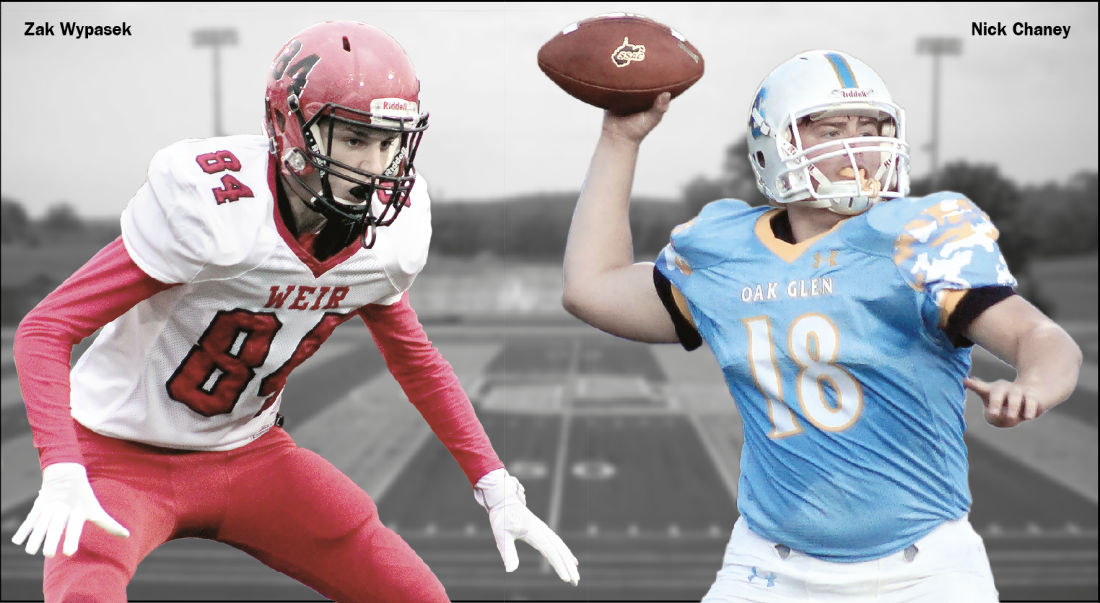 NEW MANCHESTER — It’s the first game of the season, it’s a match-up of county rivals, a prestigious trophy is at stake, both players and coaches will be pumped and all indications are that the annual Weir High-Oak Glen football game Friday will be a good one to see. The opening kickoff at the Field of Dreams is 7 p.m.

The Red Riders have won the last six games in this series, retiring two straight Carl R. Hamill trophies. The hardware is named after the Hall of Fame and all-time winningest coach at Weir High. It travels to the winning team’s school until it is won three times and then is retired. The two teams have been meeting annually since 1965 and, with last year’s 49-14 win, the Red Riders now have 14 in their trophy case. Oak Glen has retired it four times.

Since the teams began to meet after the consolidation of New Cumberland, Newell and Chester high schools into Oak Glen, Weir High has the upper hand in the series, winning 37 of the 54 games.

Weir High’s veteran coach Tony Filberto has been head coach at both schools. He left the Golden Bears for a second stint as Red Rider coach in 2012, and he says that Oak Glen this year has the most talented team since his 2011 Golden Bear playoff squad.

“They have a very good quarterback in Nick Chaney, a top receiver and running back in the Pattersons and a talented line,” Filberto said. “They’re going to be a pretty good football team.”

“Weir High is big, physical and athletic with the fastest player in the state,” he said. “They have a couple of good running backs in Drew Curtis and Logan Walters, and their quarterback, Anthony DiMatties, has progressed a lot and does a good job. We’ll have our hands full, that’s for sure.”

Filberto said his team played two good teams in the August scrimmages (Wheeling Central and Linsly). He said his Red Riders played both without the services of his versatile star, Sebastian Spencer, who underwent surgery a couple of weeks ago.

“He got released by the doctors to resume playing football and practiced a couple of days last week,” Filberto said Monday. “I think he’ll be able to play, but it is kind of a day-to-day thing and it could be a game-time decision whether he starts.”

When he does play, Filberto said the four-sport letterwinner will line up at just about every skill position at one time or another.

“He’ll be at wide receiver, quarterback, running back, in the slot and just about every place except between the tackles,” he said. “He missed both scrimmages, but we expect him to play when the ball is kicked off at Oak Glen Friday.”

Arneault also had some anxious moments when his veteran receiver, junior Hunter Patterson, injured an arm.

“He went to East Liverpool City Hospital, and doctors determined there were no broken bones, so I think he’ll be available Friday,” he said.

Filberto feels that Oak Glen’s strength will be in it’s skill players, but the Golden Bear line is pretty good, too.

“They have Nick Chaney, who threw the ball 41 times against us last year,” Filberto said. “They have their leading pass receiver, Hunter Patterson, returning, and Gage (Patterson) is back as their leading rusher.”

Chaney, a three-year starter, led all area quarterbacks in passing last year as a sophomore, completing 116 of 267 passes for 1,762 yards. He had 23 touchdown passes and 12 interceptions. Senior Gage Patterson ran the ball 48 times for 507 yards and four scores, while junior Hunter Patterson caught 36 aerials for 378 yards and four touchdowns. Senior Zach Taylor also returns as a Golden Bear wide receiver and, while he had only 24 catches, he led Oak Glen with 524 receiving yards.

“They have plenty of firepower,” Filberto said. “We’ll try to do what we always have done against a passing team like that, and that is blitz and try to hurry Chaney. That won’t change.”

Arneault will counter this year with what he thinks is an improved running game.

“We are more balanced this year with our offense,” he said. “We have more depth. We have to execute our pass game and establish the run game. The key for us will be to sustain drives. We’re better, and our offense is fun to watch. We just need to offset that with a good run game.”

Spencer returns as the offensive leader for the Red Riders, having played a lot of quarterback the last two years because of injuries to departed starter Tyler Komorowski, who now is playing college football at the U.S. Military Academy.

Spencer completed 59 of 155 passes for 856 yards, with six touchdowns and seven interceptions. He was the second-leading Red Rider rusher with 62 carries for 385 yards and six scores behind departed Donovan Kirby’s 1,312 yards and 21 touchdowns.

Filberto plans to replace Kirby in the backfield with a duo of senior Drew Curtis and junior Logan Walters. DiMatties will get his first start at quarterback.

“This definitely is a rivalry,” Arneault said. “The kids know each other. They have played against each other. It is a big game for the first game of the year. Weir High is a good team with a great program.

“We have to limit the explosive plays and contain Spencer. We can’t allow him to throw the ball for 100 yards, catch it for another 100 and run for another 100. We have to hold our ground at the line of scrimmage and not have any turnovers.”

Filberto added that this should be a good football game.

“You’ll see us put the ball in the air more than we have in the past,” he said. “We have a lot of confidence in DiMatties. Of course, we’ll run it, too. As always, we’ll take what they give us. This is a new Hamill trophy this year, so we want to get the first leg up on it.”