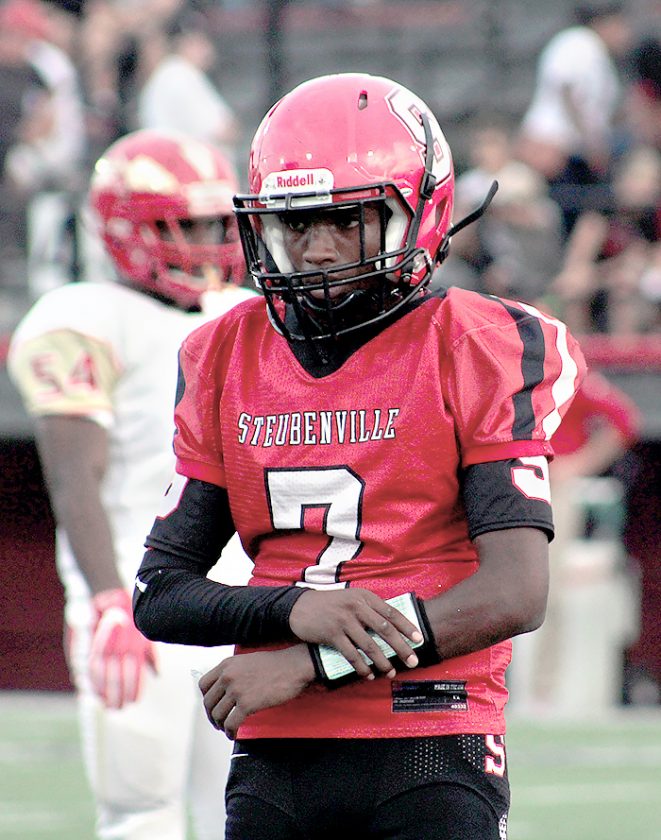 BACK IN RED AND BLACK — Steubenville’s Randy Mitchell will be back as the team’s quarterback tonight. He missed considerable time last year with injuries after starting in Week 1. (Photo by Joe Catullo)

“They have speed, size, experience and are very well-coached,” said Saccoccia, who’s entering his 37th season at Big Red. “Offensively, they have plenty of weapons, and they are very sound defensively.”

The opening kick for the inaugural meeting between the schools is set for 7 p.m.

Coach Jerry Haslett and his Dragons opened their season last week, dropping a 13-12 verdict to Kiski Area. The conversion kick following Allderdice’s first touchdown missed its mark. The Dragons went for two after their second score but came up short.

Allderdice, which clipped Westinghouse in the 2018 City League title game, is relying more on size than experience this season.

“We could be so big it’s unbelievable,” Haslett told the Pittsburgh Post-Gazette earlier this summer. “We could probably average 6-foot-3 and 300 pounds across the line.”

The Allderdice size leader is junior Solomon Johnson (6-4, 325). He’s a returning starter at left tackle and also starts on the defensive line. Fellow junior tackle Eric McClung checks in at 6-3, 260. Joe Maslanka, a 6-1, 345-pound junior, also is in the mix up front. The offensive line is anchored by senior center Seth Jackson, (5-9, 220).

Junior Shakur Pack has taken over at quarterback for the Dragons. Haslett describes him as a good thrower with an intelligent football mind.

Senior Nazir Darwin and junior Rashaun Caldwell are returning letterwinners at running back.

Wide receiving threats are senior Dijon Hall and junior Saveionne Randolph, who also starts at cornerback and was described by his coach as probably Allderdice’s best overall player.

Saccoccia said Allderdice will come to town with a leg up on his Big Red thanks to its game against Kiski.

“Right now, Allderdice has the same pluses and minuses as every team,” he said. “The difference is they’ve had a game. That means so much. Their kids already have game experience, and that makes a world of difference.”

Big Red is looking to rebound from its 10-2 season in 2018. Saccoccia’s crew knocked off Akron Buchtel in the opening round of the playoffs before falling to Hubbard. As is generally the case, graduation claimed a number of key starters from that club.

“We really don’t have new guys at new positions. We have guys without a lot of game experience at the same positions,” Saccoccia said. “As coaches, we hope they continue to improve each day. Every team out there is counting on new guys right now. We are no different.

“I thought we’d be further along right now than we are. We still have plenty of work to do.”

Offensively, Big Red returns senior tailback Tayveon Crawford, who was the Eastern District Division IV co-offensive player of the year as a junior and also a first-team All-Ohio choice. During the final four weeks of the 2018 regular season, the hard-running Crawford rushed for 909 yards. He ran for a career-high 307 yards on 24 carries in a key road victory at New Philadelphia.

Also back is senior Randy Mitchell, who was the Week 1 starter at quarterback in 2018 but suffered an injury and missed considerable time. Promising junior Cade Kernahan, who was pushing for time at signal caller, broke his left arm and will be out for six to eight weeks.

Seniors David Tuttle and Niko Kausky will get carries from the fullback spot. Tuttle bulled his way for six touchdowns in 2018, while Kausky ran for 228 yards and a couple of scores.

“We’re looking to be more balanced this season,” Saccoccia said.

“We’re not really young, but we’re inexperienced,” Saccoccia said. “Obviously, the thing we lack right now is game experience. You only get that by playing in an actual game. There’s really nothing our players can do about that until game time.”

¯ The Ohio High School Athletic Association has given Big Red until Oct. 1 to find a Week 8 opponent. Steubenville was scheduled to play Canada Football North St. Joseph, but that program has shut down. Saccoccia said he is talking with two potential opponents for that spot.

¯ Big Red has made 18 consecutive trips to the postseason, captured 18 regional championships, finished second in the state five times and claimed four Ohio titles. The program’s all-time playoff record is 67-27.

¯ Under its hall of fame coach, Big Red has won 16 of its last 17 season openers.

¯ Saccoccia ranks as the 24th winningest active football coach in the nation with his 380-70 career record. John T. Curtis of River Ridge, La., is the leader with 582 victories. Saccoccia is 43rd all time.

¯ Allderdice was one of three Big Red opponents opening the season last weekend. Pittsburgh University Prep, which will visit Harding Stadium Sept. 27, surprised Farrell 14-12. National Christian Academy, based in Maryland, opened with a 70-6 shellacking of Imani Christian Academy, located in Pittsburgh. N.C.A. will travel to Steubenville on Oct. 11.