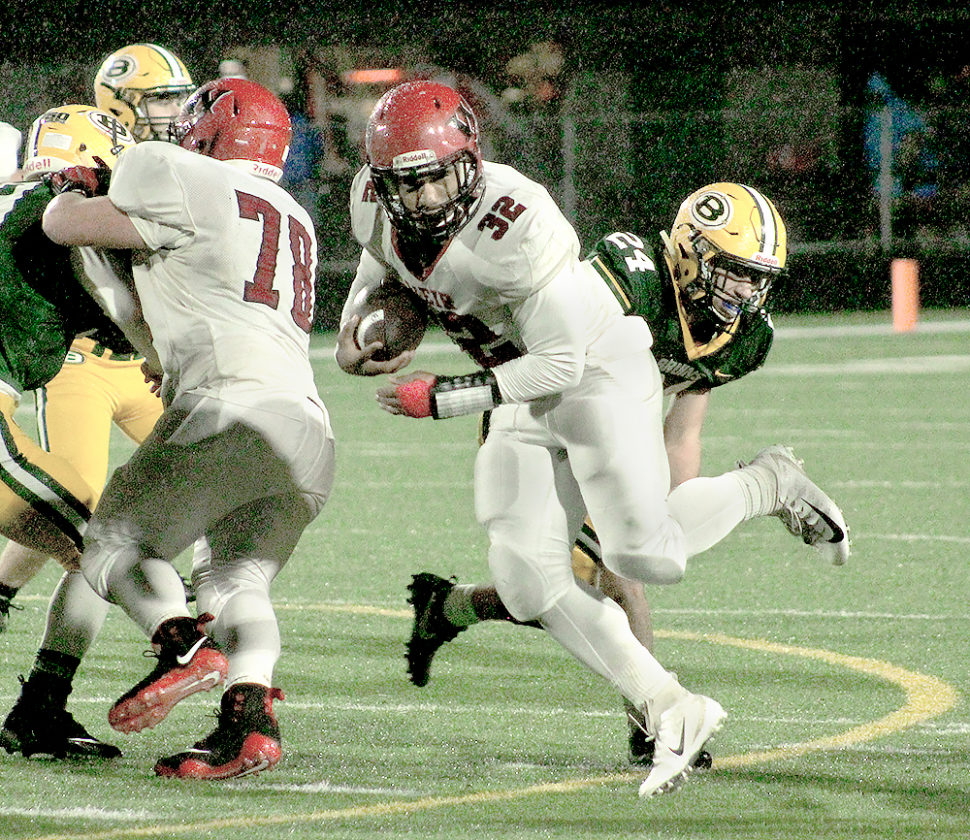 UP THE GUT — Donavan Kirby and the Weir High Red Riders will heal during their bye week before beginning their playoff run next week. (Photo by Joe Catullo)

WEIRTON — This is an easy, relaxing and fun week for the Weir High football team, as it enjoys its mandatory West Virginia bye week while awaiting the final state rankings and finding out its playoff pairing.

Tony Filberto, veteran Red Rider coach, for many years has been old school about playing all 10 regular season games in succession and taking the final week as the bye. Some coaches prefer to have the bye week in the middle of the season so any injured players can heal and to get a refresher on fundamentals as preparation for the second half.

“I always felt that if you’re going to get into the playoffs it’s a good time to heal a little bit,” said Filberto, whose club now is 8-2 and headed to the playoffs for the fifth year in a row. They are ranked 11th this week after the 20-6 triumph last Friday over rival Brooke.

“It’s a long season so we want to take this time to rejuvenate some energy,” he said. “We get to heal some injuries and we’ll have some fun things at the practices this week. Some things like Thursday night when we’ll put the ball away and share wings together. It’s now a playoff atmosphere. It’s a new season so we want to have a fresh attitude and get excited about it. It’s just time to recharge.”

Of course, when his teams don’t make it to the playoffs, they can pack up the equipment early and begin thoughts of the next year.

Filberto said the Red Riders would take Monday off except for the underclassmen who play on the junior varsity team, which was playing host to Brooke. The rest of the week would be used to brush up on fundamentals. Things like throwing, catching and blocking. Always striving for improvement, Filberto said the team would work on some of the things they need to do better. Some of the things that in the normal preparation during the week to get ready for an opponent there is very little time to do.

The Red Riders will wear pads during the workouts but there will be very little contact.

“I would call it light, physical workouts,” Filberto said. “I’ll be one of only a couple of coaches here Friday for a very light workout because most of the coaches will be traveling to scout potential playoff opponents.

“We think we could play teams like Keyser, Robert C. Byrd, Point Pleasant and perhaps some others so we want coaches to get a first-hand scouting report. That always is a lot better than simply watching film.”

By Saturday, the Red Riders will know where they stand and what team they’ll play in the first round of the playoffs so coaches will begin preparing the game plan.

Sunday at 11 a.m. coaches of the playoff teams get together at the headquarters of the WVSSAC in Parkersburg to go over details, select a game day and time and exchange films. The first eight teams have home field advantage, so the visiting teams get to select the day and time. Filberto has always said that when his Red Riders are the visiting team he wants to play on Saturday afternoon.

Donavan Kirby, Sebastian Spencer and Jake McCoy are the offensive leaders for the Red Riders during the regular season according to statistics compiled by assistant coach Troy Fetty.

Kirby rushed for 1,312 yards with 174 carries, an average of 7.5 yards per rush. He totaled 21 touchdowns. Junior Donavan Spencer, who for the second year in a row stepped into the quarterback role to replace injured senior Tyler Komorowski, led the team in passing going 54 for 128 and 679 yards. He had five touchdown passes and six interceptions. Komorowski, who injured a knee in the fourth game of the season against Keyser, was 21 of 43 for 415 yards, five touchdowns and three interceptions.

Senior Jake McCoy was the leading receiver with 32 catches for 341 yards and two scores. Senior Reed Reitter caught 19 aerials for 220 yards and one touchdown while Spencer caught 11 for 246 and three touchdowns.