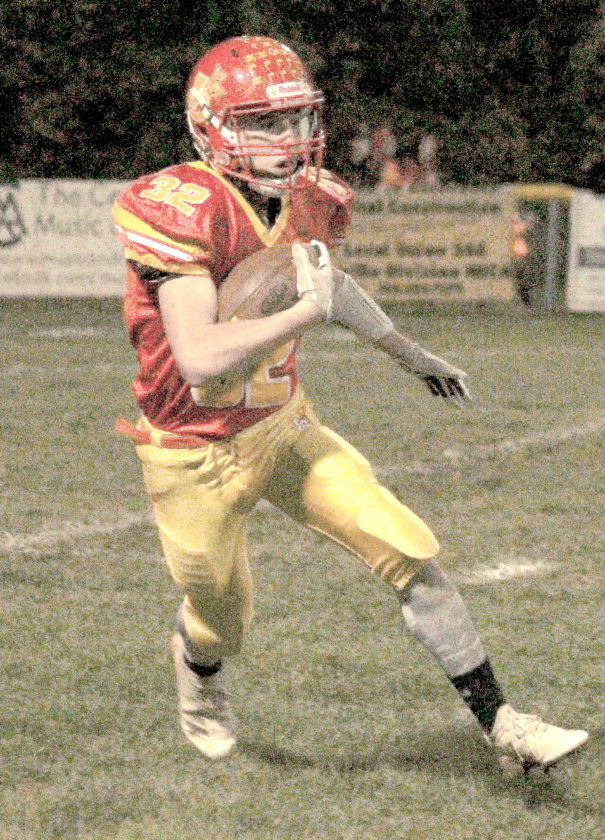 HUBBARD — Indian Creek is back in the playoffs.

According to coach Andrew Connor, to get there, the Redskins have been in playoff mode since Week 5.

The Redskins rattled off five straight wins to finish sixth in Division IV, Region 13 and earn a Saturday trip to No. 3 seed Hubbard.

“I feel like we have been in win-or-go-home mode for a while now. We have practiced with more urgency. You get to Week 5 and look at you positioning and ours was not good at that time at 3-2. I hoped we learned a lot from it that will make us a better football team in the playoffs.”

The Eagles (9-1) won their first nine games of the season before falling in the season finale to Youngstown East, 26-21.

“We got to see them in person on Friday night. That was good for us, and we traded film with them,” Connor said. “We feel like we’ve got a little bit of knowledge about them. They have a very proficient run game. They are very big up front.

“In the passing game, they do a lot off of play-action. They are not so much of a drop back team as they are a play action team. They do a lot of stuff off of the fact that they can run the ball so well. We are going to have to be sound in making sure that we don’t get caught coming up for the run with our secondary.”

On defense, what Hubbard does is a little more familiar.

“They play an odd-stack, which is something that we have seen throughout the year,” Connor said. “We have an odd-stack we play, so it is beneficial to us that we have practiced against it. They have quality inside linebackers that get after the ball. They are big up front and they have a lot of experience.”

Connor expects Hubbard, who sports an 11-14 record in the school’s postseason history, to be a well-coached team.

“They are very sound and very well coached,” he said. “That is one things you can see from watching them on film. They do not do a lot of things to beat themselves.”

The Redskins, in the playoffs for the fifth time in the last eight years, look for the program’s first postseason win.

“It is something we talk about all the time,” Connor said. “We are quite aware what our record is in the playoffs. I think the kids want to do this for themselves, the team, for the school district. All I can ask them to do is go up there, compete, play as hard as they have been playing and let the chips fall where they may.”

The Redskins and Eagles played one common opponent. Hubbard opened the season with Alliance — who is playoff bound in Division III, Region 9 — and defeated the now 7-3 Aviators 63-13. In Week 3, Indian Creek dropped a tough, 26-13 decision to Alliance.

According to Connor, with those meetings being so early in the season, the teams are much different now.

“It was so early in the year that a lot has changed,” he said. “We feel like we are a much better football team than we were in Week 3. You can look at some stuff from the film

The keys to success are what they have been all along for Indian Creek. Some things that popped back up in the close win over rival Edison in Week 10 that the Redskins are working to correct.

“I feel like a broken record, but I think it’s the same things that hurt us in our last game we thought we had got rid of,” Connor said. “We turned the ball over three times in the first half (against Edison). We had some costly penalties. We have been working very diligently in practice to correct those things. We got hurt by big plays.

“That is what it is going to come down to. We can’t turn the ball over, we can’t have costly penalties and we can’t allow big plays. If we do that, we have an opportunity to win the football game.”

Another thing to happen in the Edison game was starting running back Trevor Fante, who finished the regular season fourth in the Herald-Star/Daily Times coverage area with 1,015 yards and 12 touchdowns on 170 carries, got injured in the first quarter and did not return.

His status for Saturday is uncertain, though he is not ruled out.

“He is touch and go,” Connor said. “Hopefully the extra days, playing our last game on Thursday and opening the playoffs on Saturday, will help. It could not have come at better time for us. We have been banged up all year, so to get an extra day on both sides of the week, that is going to be beneficial. Hopefully it will help him.”

Matt Schaefer replaced him against Edison, overcoming a couple of early fumbles to finish with 183 yards and a pair of scores. For the season, Schaefer finished with 360 yards and five touchdowns in the regular season.

Sam Mazar, who took over the starting job after senior Brennon Norris went down in Week 1, finished the regular season fourth in the area with 1043 yards, eight touchdowns and eight interceptions, completing 72 of 148 passes (48.7 percent).

The Redskins offense as a whole averaged 307.8 yards and 27.9 points per game, facing a Hubbard defense that allowed an average of just 9.7 points per game and pitched four consecutive shutouts before the Week 10 loss.

The Indian Creek defense finished the regular season second in the area allowing 240.4 yards and 14.7 points per game, facing an Eagle’s offense that has scored an average of 44.1 points.