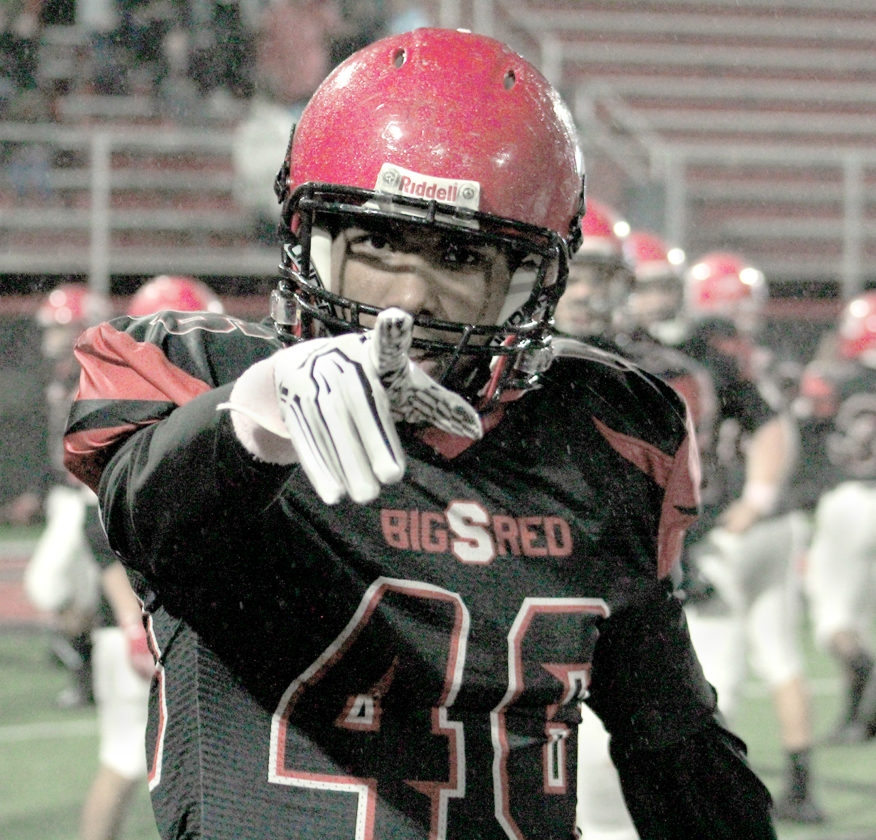 Akron Buchthel will invade Harding Stadium (the kick is set for 7 p.m.) for its 10th all-time meeting with Big Red. Steubenville holds a 7-2 edge in the series, its last victory coming in the 2012 regular season finale. The Griffins knocked off Big Red in the 1987 and 1988 Division II title games. Big Red did get the best of Buchtel in the 2005 semifinals.

The Griffins earned the seventh seed thanks to last week’s 28-12 victory over Akron East, which entered at 8-1. Big Red, making its 18th-straight playoff appearance, finished at 9-1 and is seeded second in Region 13. Buchtel, coached by Ricky Powers, will bring a 6-4 mark to town.

“They stuck with it. They appeared to be a deep hole and out of the playoffs. But, they finished the season strong and had a great win over Akron East. They deserve to be where they are — in the playoffs.”

“They played an outstanding schedule,” Saccoccia said of the Griffins. “In my opinion, it’s the toughest schedule in Division IV. They did a great job with that schedule.”

Offensively, the Griffins have scored 254 points in their 10 games while allowing 129.

“As a team overall, they have five or six weapons and they use them all. Their defensive line is solid and also is a weapon.”

The Buchtel offense is directed by senior quarterback Mychael Leno. He’s joined in the backfield by running backs Robert Young-Jones, a sophomore, Kirkland Robins, a senior, and Ja’Mell Jacobs, another sophomore.

When Leno goes to the air, he has a host of weapons. Starting wide receivers are senior Zayir Keen, senior Martavien Johnson and senior Chase Powers. Marquest Foster, a senior, starts at tight end.

Across the offensive front, Buchtel is huge.

“I really think this is the toughest first-round draw we’ve had since back in the day of playing Cardinal Mooney and Ursuline,” Saccoccia said. “They deserve to be where they are and we deserve to be where we are. I think it is going to be a great football game.”

After dropping its opener to Penn Hills, Big Red reeled off nine straight victories to close the regular season. In the finale against University School, Steubenville rolled to a 49-19 victory thanks to another huge game by junior tailback Tayveon Crawford (249 yards and four touchdowns). Crawford finished the regular season with 1,414 yards — he rushed for 909 in the final four weeks.

Defensively, Steubenville — which finished second in the final Ohio AP Division IV poll — surrenders 233 yards a game (just 75 on the ground) and 18 points.

Lulla, a two-year starter at middle linebacker, has recorded 92 tackles, six sacks and 12 tackles for a loss. Senior nose guard Kwadre Williams, another two year regular, logged 54 tackles, 17 resulting in a loss of yardage, and eight sacks. Senior defensive end Jaziah Blackwell has been in 52 tackles and recorded 10 sacks. Blackwell also has 18 tackles for a loss.

Junior linebacker Dave Tuttle has 52 tackles (16 TFL) and four sacks. Senior Dylan Cunningham has 56 tackles from his strong safety position, five resulting in a loss. He also has two sacks.

“We’re getting healthier,” Saccoccia said of his Big Red. “Hopefully, we can get one more player back this week. That will allow us to be about 90 percent two-platoon for Saturday.”

“There are eight good teams in our region, no doubt,” Saccoccia said. “The first game is the toughest for everyone. You have to be totally prepared. You can’t worry about any outside stuff — like injuries or the weather. Anything you can’t control, you can’t worry about.

“We can really only control two things — how we play and how we coach. It’s a team thing — it’s how the coaches prepare the players and how the players execute. We both have to be ready in order for us to be successful.”

When discussing his program’s incredible playoff streak, Saccoccia said the key issue now centers on “what this team has done.”

“The 17 teams before were outstanding but their accomplishments really don’t matter now,” he said. “It all how this team has done and how it has improved every week.

“If grind is worth anything, then we just have to do it for another week.”