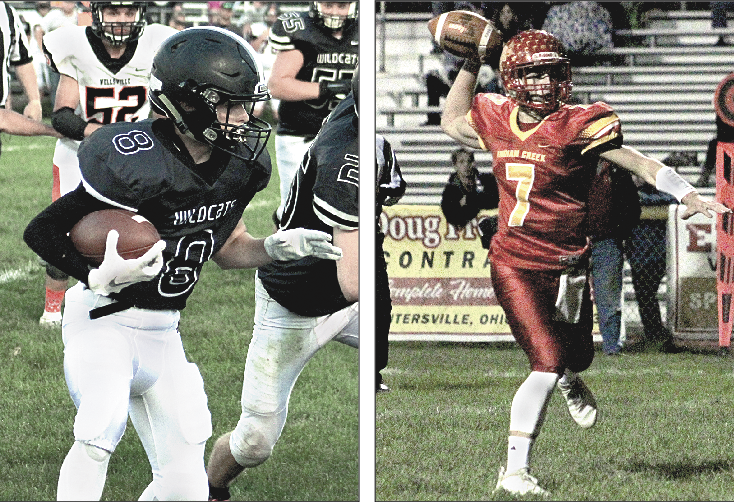 LEADING — Edison’s Tyler Shrieve and Indian Creek’s Sam Mazar will lead their teams against one another tonight. (Photos by Joe Catullo)

WINTERSVILLE — When Edison and Indian Creek meet in the annual Route 43 Bowl at 7 p.m. today, there are a lot of personal connections on both sides.

With less than eight miles between the schools, the players, coaches, families and fans all are likely to have friends, or even family members on the other sideline or in the opposite side of the bleachers.

Look no further than Hammondsville’s Ken Waggoner, who will be a very conflicted man tonight. His grandson, Kaleb Waggoner, leads the Wildcats’ ground game, with 646 rushing yards and 10 rushing touchdowns. One of the Redskins who will be attempting to tackle him at Kettlewell Memorial Stadium will be Logan Wilson, Ron Waggoner’s stepson.

“It is a rivalry game. Everyone will be there. We know that when Kaleb runs the ball, Logan is going to try and smash him, and vice- versa. It is nerve-wracking, but it’s also fun.”

As family members typically are, the seniors are competitive with one another, making for added bragging rights when the fourth-quarter clock winds down.

“They are both very competitive at everything,” Ken Waggoner said. “They go fishing, and it is a competition to see who caught the biggest fish. There is going to be a lot of clapping both ways. It is pretty neat.”

The personal ties extend to the coaches, too.

“It is special for me because I teach a lot of their kids at the JVS,” Indian Creek coach Andrew Connor said. “It is a special game for the schools. The kids all know each other. This is what high school football is supposed to be about. Being (tonight), we are the only game in town.”

Edison coach Shane O’Brien, who looks to wrap up his first season at the helm with a win to finish at the .500 mark, knows the importance of it as well.

“This is always a big rivalry game for us,” he said. “It is always a big game for the schools, the communities and especially our players. No matter what the records are, it is always easy to get up for this game. There are a lot of kids that know each other, have gone to school together at some point or are related. It is a little more personal than most games but just adds to it.”

The Redskins are looking to solidify a spot in the Division IV playoffs. Coming in at 7-2, winners of the last four to climb to sixth in the latest computer ratings, Drew Pasteur’s projection is Connor’s bunch will finish fifth with a win.

“It is an important game for us,” Connor said. “First and foremost, it is a rivalry that has gone on for long time. It is a Buckeye 8 North game, and we would like to win the Buckeye 8 North. We know what is in front of us and where we could be if we go out and execute.”

While the Wildcats’ bid for a Division V playoff berth ended, O’Brien would love for his team to play spoiler, recalling a game from his playing days when the roles were reversed.

“We are looking to finish on a good note,” he said. “We know they are playing for a playoff spot, and I can’t say that we aren’t using that as a little motivation. I was a part of the team where Creek knocked us out of the playoffs my junior year. We are getting ready to go out and give them our best.”

Adding to the emotion of the rivalry is Indian Creek’s senior night festivities.

“It is a special thing when you put the uniform on for the final time inside your stadium,” Connor said. “There will be a lot of emotion.”

The Redskins enter averaging 301 yards of offense and 27.4 points per game. Leading the attack is quarterback Sam Mazar, fourth in the Herald-Star/Daily Times coverage area with 922 yards, seven touchdowns and eight interceptions. Trevor Fante leads the rushing attack with 1,009 yards and 12 touchdowns, good enough for third in the area. Matt Mamula had hauled in 23 balls for 407 yards and a score.

On defense, Indian Creek leads the area, allowing an average of just 225.2 yards and 13.1 points per contest. The Redskins pitched back-to-back shutouts in Weeks 7 and 8 to take over the top spot on defense.

“They are a very well-coached and disciplined team,” O’Brien said of the Redskins. “They have some playmakers on offense, and they get to the ball and tackle real well on defense. We have to try to create some big plays and limit their big plays.”

Edison averages 275.6 yards and 23 points per game, led by senior quarterback Anthony Sinicropi with 1,108 yards, 12 touchdowns and 10 picks to rank third among area passers. He has added another 335 yards and four scores on the ground. Hauling in his passes is fellow senior Bryce McAfoose, with 29 grabs for 341 yards and two touchdowns. On defense, Edison allows 310.7 yards and 26.8 points on average.

“A lot of credit has to be given,” Connor said of Edison. “They are a team that really shown a lot of pride in what they have done this year. They have come a long way. Even in the game that they have lost, you see the effort they have put in. They are back to playing a very physical, tough-nosed defense like Edison always has. Coach O’Brien has done a great job.”