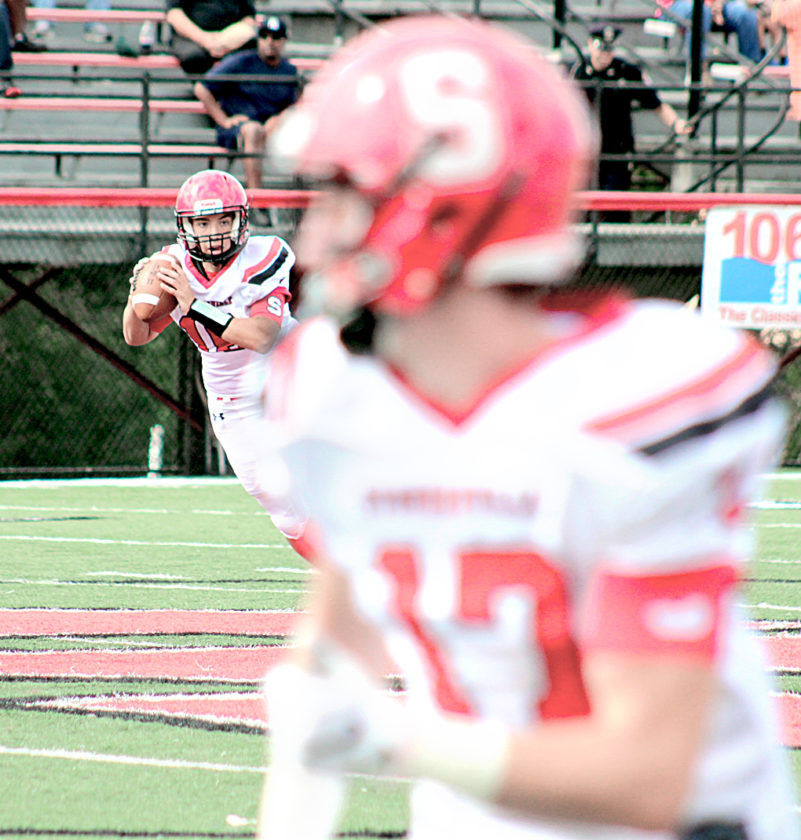 STEUBENVILLE — Big Red has clinched an 18th consecutive trip to the playoffs and can guarantee itself a first- round home game with a victory in Friday’s regular season finale opposite University School.

The kick for the second meeting between the schools (Steubenville blanked the Preppers 30-0 in 2017) is set for 7 p.m. inside Harding Stadium. Big Red, ranked fourth in this week’s Ohio AP Division IV poll, has won eight straight since its season-opening loss to Penn Hills. University School, located in Hunting Valley near Cleveland, will bring a 4-5 mark to town.

“Our first goal every year is to earn a home playoff game,” Big Red coach Reno Saccoccia said. “After that, then we reset our goals. Hopefully, we can reset our goals on Saturday morning. I really would like to finish this one off and guarantee ourselves a home game.”

“Our 129th season of varsity football has had its share of ups and downs,” Malbasa said. “We have played several excellent teams (three of their losses came to teams with a total of one defeat), and we have lost two games that came down to the last possession of the game.

“Like Big Red, we take great pride in setting ambitious goals, so it is disappointing to enter Week 10 with only the longest of playoff shots. That said, our entire program is excited to compete in the best venue for high school football in the state, to play in front of a tremendous crowd and to give Big Red our best shot.”

Saccoccia said University is a much different team than it was last year.

“We have to prepare for two styles,” he said. “They have their wide open style that we saw last year but, in the last game, they went with more of a conventional tight offense, using a time-consuming ground game with some play action pass.

“They just completely changed, so we’ll have our work cut out for us on defense preparing for two different offenses. Defensively, they do a good job of mixing things up. They are pretty gap sound with both defenses they run.”

Jack Voudouris is the top target for Perez. He has 36 catches for 518 yards and six touchdowns. Jake Kapp has hauled in 23 passes for 391 yards and four scores.

“We have a young football team,” Malbasa said. “Only one of our defensive starters is a senior (captain Danny Ciano), and our offense features only five senior starters. We’ve had tremendous play from our wide receivers (senior captains Voudouris and Kapp and junior Pujolas) and our linebacker-running back due of Loconti and Flowers. We also are receiving great play from juniors Jack Borrow and Charlie Brennan who have emerged as leaders in our secondary.

“While we do not have a large group of senior starters, I would note that our current senior class has helped rebuild our program. Four years ago, there were 28 players in grades 9-12 at our first summer practice. This year, we have a roster of 53 players, including 14 seniors in a class that began its freshman year with only four football players.”

Malbasa, who also made the trip to Harding Stadium as head coach of Cleveland Benedictine, is looking forward to Friday’s visit.

“Having the opportunity to bring our team to Harding Stadium to compete with Big Red represents everything we strive to achieve in our program,” he said. “Our mission is to prepare and train to compete to become champions, and everyone in our program knows that Big Red models this better than anyone in the state.

“Communities with championships, committed coaches and players, invested families, engaged community members and supportive school administrators all play a role in creating an atmosphere in which a football team can compete at an elite level. It is no accident that Big Red has one of the top programs in the state, and its school district recently ranked at the top of Ohio’s performance index for public school districts.”

Big Red improved to 8-1 with its 54-18 victory over Cardinal O’Hara last week. The Hawks actually scored first in that contest before Steubenville took control.

“Last week was the first game we didn’t start fast,” Saccoccia said. “Hopefully, we can get back to playing focused football this week. If we’re not focused, that is on me. Our players have stepped up each and every week and done what is necessary to secure a victory.”

Big Red’s streak of 18 consecutive postseason appearances is fifth best all-time. Cleveland St. Ignatius has the most with 22 from 1988-2009.

“It means we’ve had some good players and played in some pretty good games,” Saccoccia said of the playoff accomplishment. “The big thing is our players have high expectations, and they work very hard to achieve those expectations.”

Prior to the game, Big Red will recognize its 25 seniors.

“They’ve been great guys,” Saccoccia said. “I talked to them earlier in the season and told them they’ve helped two other teams get to the state finals. Further, I told them, ‘Now, help yourselves have the best the senior year you can have.’