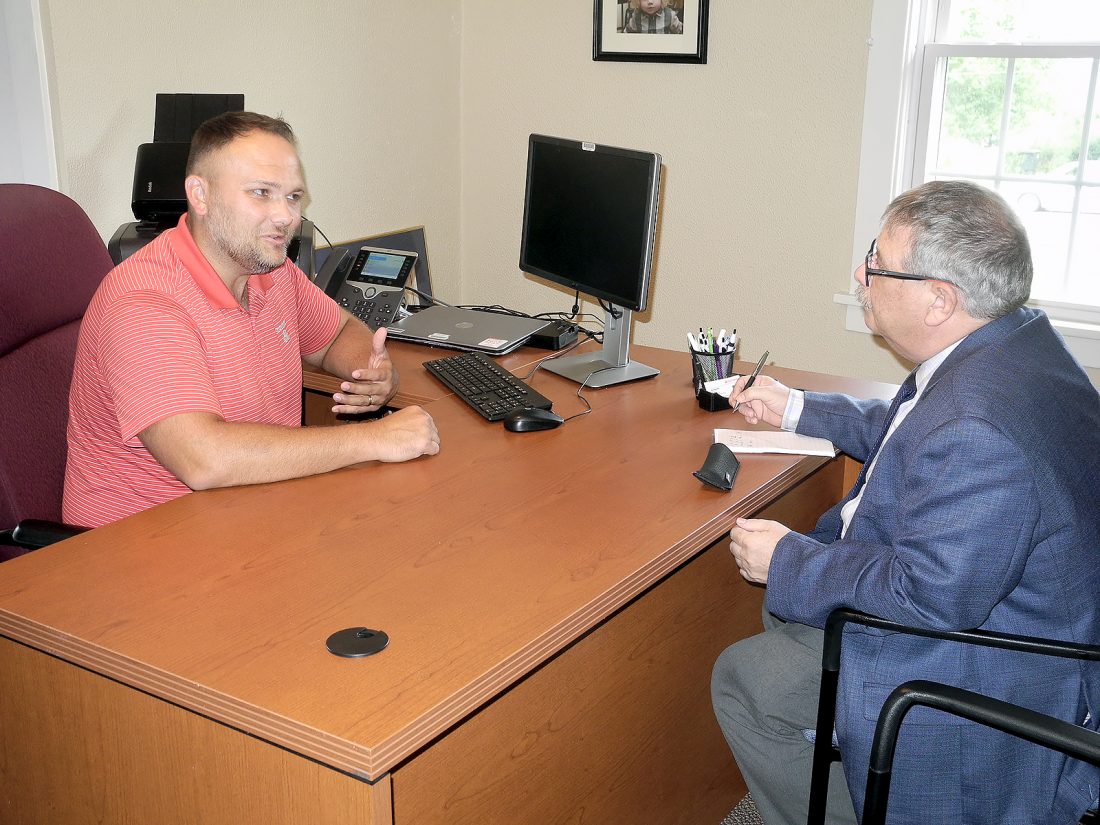 PRESENTATION — Dan Stephens of State Farm Insurance, left, and Ross Gallabrese, executive editor of the Herald-Star and The Weirton Daily Times, discuss plans for the Sept. 22 presentation by Eddie Olczyk as part of the Herald-Star Speaker Series Presented by Eastern Gateway Community College. Stephens, whose agency has offices in Steubenville and Martins Ferry, is one of the sponsors of the evening. -- Warren Scott

STEUBENVILLE — Count Dan Stephens as being among those who are interested in hearing Eddie Olczyk share his story.

“I’m excited,” said Stephens. “I think the message he shares is outstanding, just because of the adversity he has been through.”

“As a former athlete myself, I know what it takes to be able to play at that level,” said Stephens, who played for Walt Harris as a member of the University of Pittsburgh football team between 2000 and 2004. “It’s a whole other level to do that, but when you look at what he has been able to overcome from a physical standpoint, that’s amazing.”

Olczyk was a member of the 1984 U.S. Olympic hockey team and was a No. 1 draft choice for his hometown Chicago Blackhawks. He spent 16 years in the National Hockey League, playing for six teams, including the Penguins. After he retired, Olczyk moved into the broadcast booth, serving as a commentator on Penguins’ broadcasts before becoming the team’s head coach.

He would return to the booth, spending time with the Blackhawks and as the lead commentator for NHL games on NBC. He and his last partner, Kenny Albert, will be the lead broadcast team when a portion of the league’s games shift to Turner Sports this season.

Olczyk also is a noted thoroughbred handicapper, and has been a part of telecasts of many major horse races.

His life took a dramatic turn on Aug. 4, 2017, when he received the diagnosis that he was suffering from Stage 3 colon cancer. His battle against the cancer and his fight to get through treatments — which proved successful when he was declared cancer-free in March 2018 –make up a significant portion of his book, “Beating the Odds in Hockey and in Life,” which he co-authored with Pat Foley.

“It’s a great comeback story,” said Stephens, whose State Farm Insurance Agency is helping to sponsor Olczyk’s presentation. “It teaches young people that things aren’t always going to go your way. Even for adults — I think it’s a great message now as we go through the pandemic and other things in lives.

“How do we come across the other side and still be successful? Do we give up? The first time after we get knocked down, do we throw our arms up in the air and say ‘This is a shame that this happened to me?'”

Stephens, who graduated from Linsly, said the medical side of Olczyk’s story really struck home with him.

“I have been a Type 1 diabetic since the age of 10,” he explained. “It taught me a lot, that even though you hate to have something like this happen to you, there’s always something out there that’s worse that someone else is going through. I thought, I can get through this, I can fight through it.

“It could have been potentially limiting to me as an athlete, but it made me more disciplined. I learned to make it a strong point to where it made me a better athlete. I always had another thing to worry about. Every time I had a break, I had to take my blood sugar to see where I was at.”

In his book, Olczyk credits all of those around him for helping him in his fight against cancer. From members of his family, to the entire Blackhawks organization, to colleagues at NBC, to old friends and new friends and those who played with and against. Stephens agreed that support is critical.

Olczyk will be the 11th speaker in a series that began in November 2012. Stephens said the series is an asset to the community, and something he is proud to be a part of.

“The quality of the speakers has been outstanding,” he explained.

“It’s something that’s good for the community,” added Stephens, whose agency has offices in Steubenville and Martins Ferry. “State Farm’s message is ‘Like a Good Neighbor,’ and I want to be able to embody that. I’m not just a business owner, and I’m not just a State Farm agent. I believe I am a part of the community, and I believe it’s my responsibility to help build the community.

“The speaker series is a part of that,” he continued. “For me, the community always comes first. That’s who my bosses are. Everybody has a boss, and the people in the community really dictate where I go. I always believe that you should give back to the people who have helped you, and everyone can grow together.

“Look at the activities we have in our community, the outstanding events we have downtown — this just adds to that. It can bring people in and let them see what we have to offer.”

Olczyk’s presentation will begin at 7:30 p.m. General admission tickets cost $25 and are available at the Herald-Star office, 401 Herald Square, Steubenville. Tickets also are available at heraldstaronline.com and weirtondailytimesonline.com.

A preferred ticket package is available for $50. It includes a copy of “Beating the Odds” and the opportunity to be among the first people to meet Olczyk after the presentation.

A VIP package is available, and includes admission to a private reception that will be held from 5 p.m. to 6:30 p.m. at Froehlich’s Classic Corner; a selection of beer, wine and hors d’oeuvres; the opportunity to meet Olczyk and have a photo taken with him; a copy of the book “Beating the Odds;” transportation from Froehlich’s to the high school; and preferred seating for the presentation. The price is $150 for a couple and $85 for a single ticket.

Tickets also are available at the offices of the Times Leader, 200 S. Fourth St., Martins Ferry, during regular business hours.

Copies of Olczyk’s book are available for purchase at the Herald-Star. Contact Brown for details. A portion of the proceeds from the sale of the book as well as money generated from a basket auction prior to the presentation will go to local cancer centers. 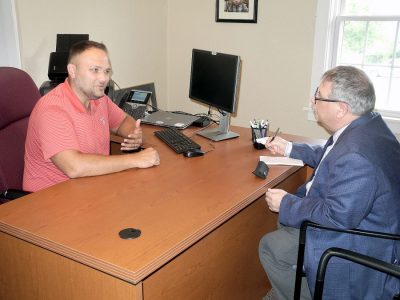