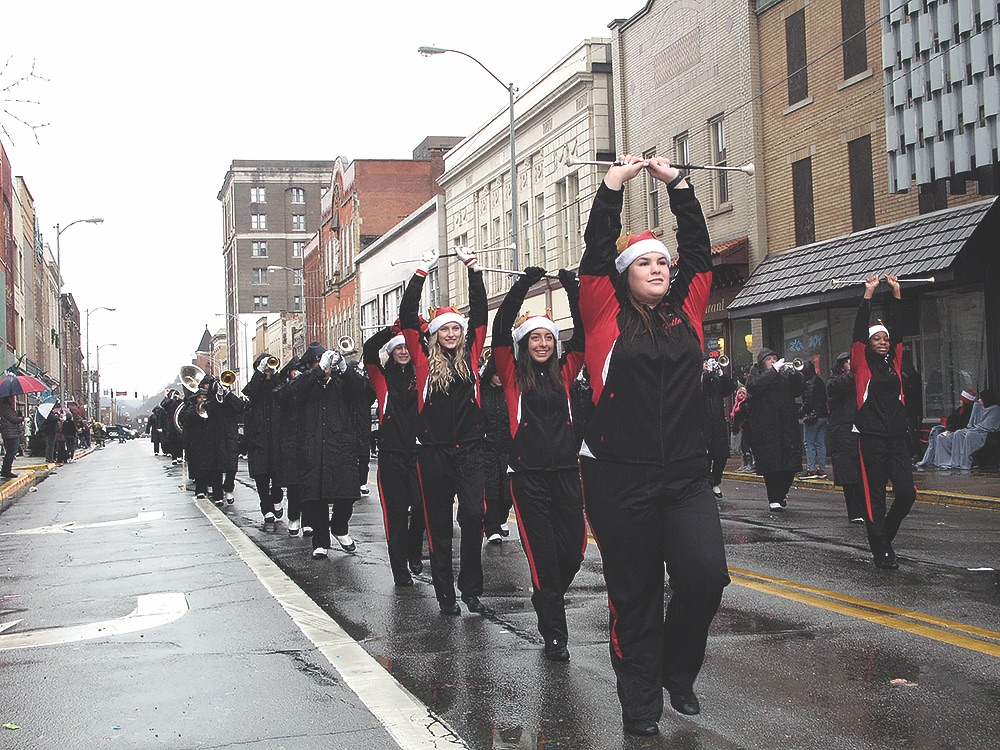 THE 2019 PARADE—This scene marked the look of the 2019 Steubenville Christmas parade which was marked with cold temperatures and rain. After missing the event in 2020 due to restrictions, organizers are preparing for its return on Saturday. -- File

“I’m very excited about the parade, particularly since it was canceled last year,” she said, “so it’s been two years. I’m very happy its back on this year, it’s all looking good. There were a lot of last-minute changes as always, but we’re very excited, and the weather’s looking better now for Saturday. Hopefully, the weather will be good and everybody will have a happy day.”

Snyder said 75 units have entered the parade to date, including five bands as well as floats, dance studios and vehicles. The parade starts at noon and will travel south on Fourth Street beginning at North Street and ending at South Street.

“We’ll have a lot of variety,” Snyder said. “We have floats, martial arts groups and other performers going down street. We’ll have horses and the humane society is bringing doggies. We’ll have lots of floats, one of them has really been a favorite.”

“One that’s been a favorite, a special one, Eastern Construction always … takes some of its big heavy equipment and makes a huge float, and they tell me they’re going to outdo the last couple years,” she said. “I can’t envision it, but they put on the paperwork it would be 75 feet — that’s big.”

The parade won’t be televised this year, so Snyder said they expect a bigger turnout.

Volunteers from the Lions Club, members of Amateur Radio Operators of TERA (Tri-county Emergency Radio Association) and Historic Fort Steuben will be on site at 8:30 a.m. to close off the streets and put out the numbered cones indicating parade placement.

“The lineup starts at Ross Street and will go down to North Street,” said Jerry Barilla, president of Historic Fort Steuben and the Visitor Center and mayor of Steubenville. “The units (start) arriving at 10:30 a.m. in shifts until they are all ready to go when the parade actually starts at noon. Steubenville High School graciously opens its doors for the parade participants to use the restrooms and get warm while waiting for the event to start.”

Barilla is enthusiastic about this year’s parade. “A parade is an opportunity to bring everyone together for a positive experience. It’s the spirit of Christmas that can be seen and heard!”

Many familiar entries from past years will be on Fourth Street this Saturday, including the Osiris Tin Lizzies, the Boys Scouts, the Jefferson County Humane Society canines, and the City of Steubenville Fire trucks. New entries will come from Turn 3 Horse Training with horses and Friends of Beatty Park, while a Firetruck Train will be added to Historic Fort Steuben’s entry this year.

Again this year, Santa will ride into town in a special Tanker Sleigh courtesy of Steel Valley Tanks.

“Our grand marshal will be Richard Pflug and his wife, Heidi,” Barilla said. “Richard was a long-time businessman in the city and a quiet donor to many organizations. Trinity Health System sponsored the beautiful horse-drawn carriage they will be riding in. And we are again grateful to Eastern Gateway Community College for being the title sponsor of the parade.”

Barilla said Advent Market at Fort Steuben Park will be open for parade-goers to browse.