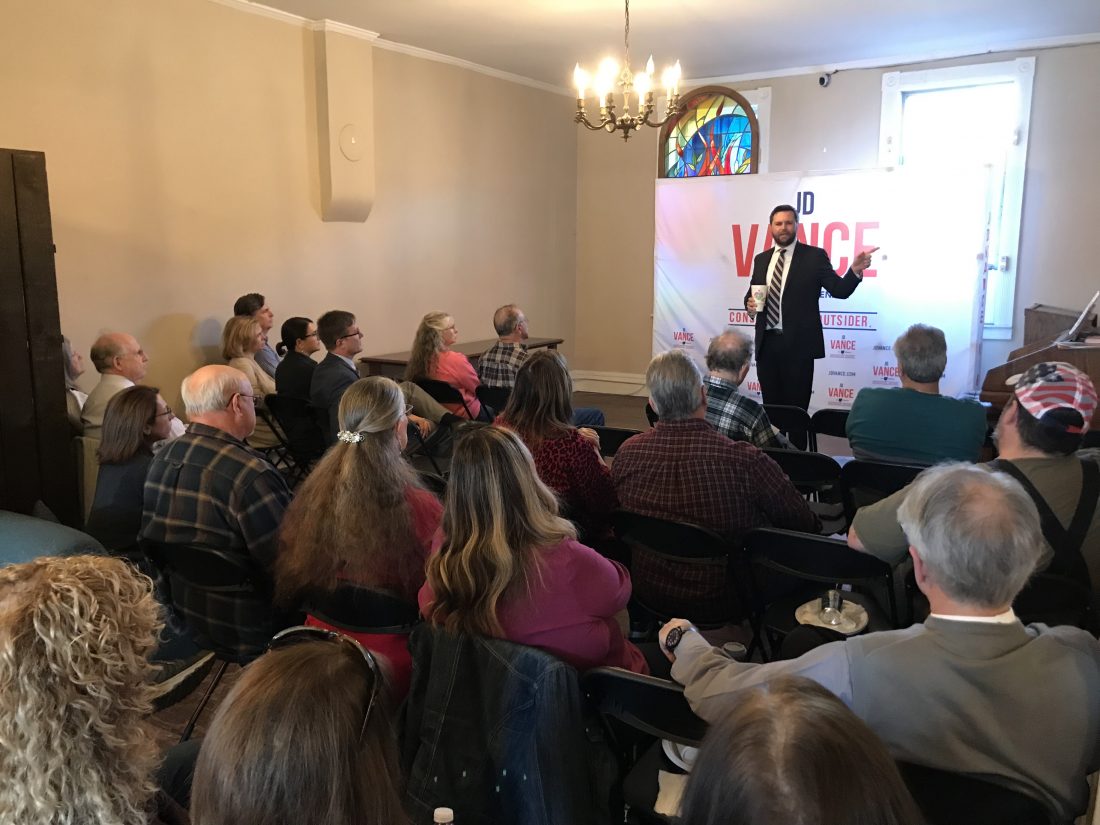 ON THE TRAIL — U.S. Senate candidate J.D. Vance held a meet and greet at Leonardo’s Coffeehouse on Fourth Street Tuesday afternoon, speaking to a crowd of about 50 people in the upstairs meeting room. -- Andrew Grimm

Vance, a Cincinatti-area Republican from Middletown vying for the GOP nomination in the 2022 U.S. Senate race, made his case on those points and more to a crowd of about 50 people gathered in the upstairs meeting room at Leonardo’s Coffeehouse on Fourth Street Tuesday afternoon.

“We constantly elect politicians who talk about the problem instead of doing something about it” he said, making the case that, if elected, he will be the one to address the problems Ohioans face.

He said he feels the Republicans have “real momentum” following last week’s victory by Republican Glenn Youngkin in the Virginia governor’s race and other results across the country.

“There is a real momentum to push back against all of this craziness and a real momentum to build things again,” he said. “Our Constitution gives us the power to fight back. We can bring manufacturing back to this country, we can tell our schools they have to stop indoctrinating our children, we can make it possible for middle-class people to support a family on a single wage, and we can stop the madness coming out of Washington D.C.”

Standing in front of a banner that had the slogan “Conservative Outsider” he said his idea for what the conservative movement should strive for comes from his grandparents, who he said raised him and were able to raise him on a single wage.

He said one of biggest problems facing children today is the number of them growing up “without daddies in the home.”

That, Vance said, is partially because “our idiot leaders decided we didn’t need manufacturing in this country.”

“We rely on the Chinese, the Mexicans, other countries, some of which hate us, to make all of our critical stuff,” he lamented. “A lot of the middle-class manufacturing jobs that supported families like mine disappeared, so you had fathers disappear from homes unable to support a family, and on the flip side of it we became a much more economically dependent country.”

He said about 95 percent of the drugs Americans use are made in or made from products produced in China.

On inflation and supply chain issues, Vance said, “If we made that stuff in America, we wouldn’t be depending on other regimes to ship it into our country right now,” making reference to cargo ships backed up in American ports.

“We know what happened in places like Middletown, like Steubenville, like Youngstown when those manufacturing jobs disappeared … so many of our problems that exist in our society are traced (to depending on other countries for goods instead of producing them in the U.S),” he said.

He said concerns over trade are what former President Donald Trump ran on and noted the Republican Party was some of his toughest opposition on those issues, citing the “deep state.”

He told the story of a little girl he encountered on the trail whose father said she was told in school she is an oppressor because she was white.

“The constant culture war on traditional American values goes hand-in-hand with the economic devastation that exists in communities like Steubenville,” he said, making a case that politicians divert attention from problems they have caused.

Moving onto the push for “environmental justice” he pointed out the infrastructure bill passed last week puts an emphasis on electric vehicles, and, he said seven of the 10 largest battery manufacturers are in China, which he called “the dirtiest economy in the entire world.”

“It is a lot cleaner to get natural gas out of the ground and do something with that natural gas in Southeastern Ohio than it is to have China manufacturing all of our batteries,” he said.

Moving on to big tech companies, who he said “censor conservatives from the President of the United States (referencing Trump’s ban from Twitter and Facebook), to middle-class Ohioans,” he talked about the need to break up the tech giants.

“I really believe that unless we stop the censorship of conservatives by Google, Facebook, Twitter and Amazon, we’re not going to have a real country anymore,” Vance said.

He also said that everyone has a right to make their own personal choice on whether or not to take a COVID-19 vaccine.

“Unless we have Republican politicians willing to fight back against (government overreach and big corporations), we’re going to lose this country.”

Vance, following his remarks, took questions from those in attendance for about 20 minutes and mingled with the attendees for a period thereafter.

Steubenville was his second of three Eastern Ohio stops on the campaign trail Tuesday, as the campaign hit Marietta prior to coming to the Ohio Valley, then headed to Youngstown.

As for why he came back to Steubenville so soon, Vance told the Herald-Star it is simple — “I like it.”

“We talk so much about the decline of our manufacturing economy, and there are few places that have been affected by it as much as Steubenville. If I am right, and I think I am, and I am able to do some good, and I know I will be able to, the Steubenvilles of the world will benefit from it.”