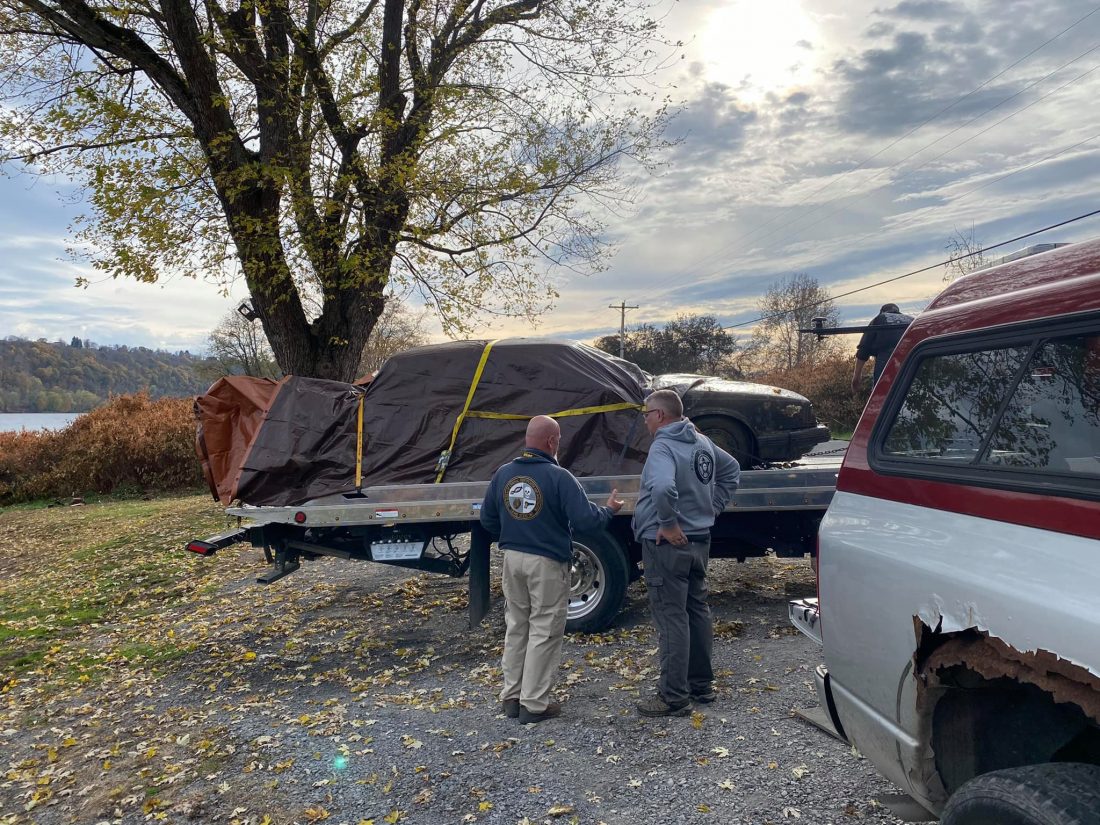 RECOVERY — A vehicle belonging to Brian Goff is pulled from the Ohio River. The remains of Goff and Joni Davis were found inside after they had been missing since 2018. The dive team that located the vehicle spoke about the search operation. -- Contributed

RAYLAND — A mystery more than three years old is now being solved since a vehicle containing the bodies of a couple missing since 2018 was found last week.

The dive team that located the submerged vehicle recounted the search.

Chaos Divers, an Illinois-based underwater recovery dive team, found the bodies of Brian Goff, 64, and Joni Davis, 55, inside Goff’s light blue 1990 Oldsmobile Delta 88 beneath the surface of the Ohio River on Nov. 11.

Jacob Grubbs and Mark St. John, divers with Chaos, located them. Grubbs said the couple was found while the dive team was searching for another missing person.

“It’s an honor to work for the families and try to bring lost loved ones home,” Grubbs said.

“We were actually searching for Karen Adams at the time.”

Adams has been missing from Hancock County since 2007.

While the team was in the Ohio Valley, friend Josh Hammond of Lebanon, Ohio, told them about the case involving Goff and Davis. The couple had been missing since June 10, 2018. They were last seen leaving Pizza Hut on National Road in St. Clairsville. Goff was Davis’ caregiver. Davis previously had suffered a traumatic brain injury.

After hearing about the search for the pair and their last suspected location on state Route 7 near Rayland, the dive team thought they might be able to help.

“We’re on the Ohio River, so let’s go down there and see the location at Rush Run Road and see if we can find Joni and Brian. Doing so, we went to the Rayland Marina,” Grubbs said. “We just went upstream on the Ohio River, and when we got to the point of interest we went just a little past it and we actually drove down in the boat using the sonars.”

Grubbs utilized Humminbird Sonar, which he said has been effective in such situations.

“They’re known to find vehicles,” he said. “We had actually came across this spot that we had concern for. … When the vehicle crossed the sonar, then we dove on it and confirmed.”

The divers dropped a magnet line on the car and retrieved their diving gear in preparation to make the dive. Grubbs said the length of time the vehicle had been submerged might have aided in the sonar locating it.

“The area of concern was a big, old oak tree. I don’t know if that had any significance between the two,” he said, adding the vehicle was located at the site of the couple’s last cellphone “ping.”

“When sonar teams go out and look, sometimes they go out really super early. The vehicle … hasn’t had time to create sediment to bring back a good picture on the sonar, so after years of it being in there and collecting sediment, it actually shows a better picture on the sonar. … When we (detected the vehicle), we knew it was them. We were 95 percent sure it was them. So we decided to dive on it that evening.

“It was getting to be dark,” Grubbs continued. “The sun was already set, but you still had just a little bit of light, and diving down on a vehicle that was only 15 feet from the shoreline and about 8 feet of water, I was safe enough. I used big dive lights. Any time I actually dive, it’s always dark underwater, so it doesn’t phase me to take a night dive. And it was a little chilly, but we were willing to do that to make sure that this was their vehicle and get answers if they were or were not there.”

The divers checked the vehicle for identification such as license plate numbers. Grubbs said it appeared to him that the car was not damaged when it was submerged, but he added these were matters to be determined by law enforcement.

The divers have been active in the region before. Working with associate dive team Adventures with Purpose about a month ago, they located Charles “Chuck” Fluharty of East Liverpool in the Yellow Creek waterway. Fluharty had been missing for seven years.

“We were doing a case with Adventures with Purpose, which pretty much started this whole mission of finding lost loved ones. He’s pretty much the founder,” Grubbs said, adding Chaos Divers began searching for remains with sonar in 2020 and Adventures with Purpose started doing so two years ago. “Two different entities, but we have the same purpose and we try to help out.

“We were starting out cleaning river systems and stumbled upon a car,” he said, adding the dive team continued to find and recover submerged vehicles. Eventually they discovered a body.

“We got our equipment and we started working on cold cases,” Grubbs said. “There’s been about 15-16 cases solved since we started this with the two of us, collaborative with Adventures with Purpose. We work with the families, but we will contact law enforcement and tell them we’re in the area.

“The interactions with the law enforcement was beyond amazing. They’re not exactly sure what happened with Joni and Brian, but they handled it very well, finding it and working with us,” Grubbs added. “When we finished pulling Joni and Brian out of the river, I noticed the families were by the law enforcement officers’ vehicles. We went down and we spoke with them. They had open arms, and they were just glad they had answers and they could bring the family home to lay to rest.”

Grubbs said the team will continue the search for Karen Adams.

For information, Chaos Divers can be reached at the website chaosdivers.com and on Facebook. Grubbs said Team Watters Sonar at teamwatterssonar.com is another valuable resource for sonar equipment.

The investigation into the deaths of the Martins Ferry couple will remain in the hands of Ohio authorities, Belmont County Sheriff Dave Lucas said last week. Often, since the Ohio River falls under West Virginia jurisdiction, bodies found in the river become cases that are investigated by Mountain State law enforcement. But Lucas said in this case that would not be happening because of the investigation originating in Ohio.

Autopsies and forensic work are being conducted by the Ohio Bureau of Criminal Investigation.

CHARLESTON — The two leaders of the West Virginia Department of Education and state Board of Education have ...

Beast of the East is back