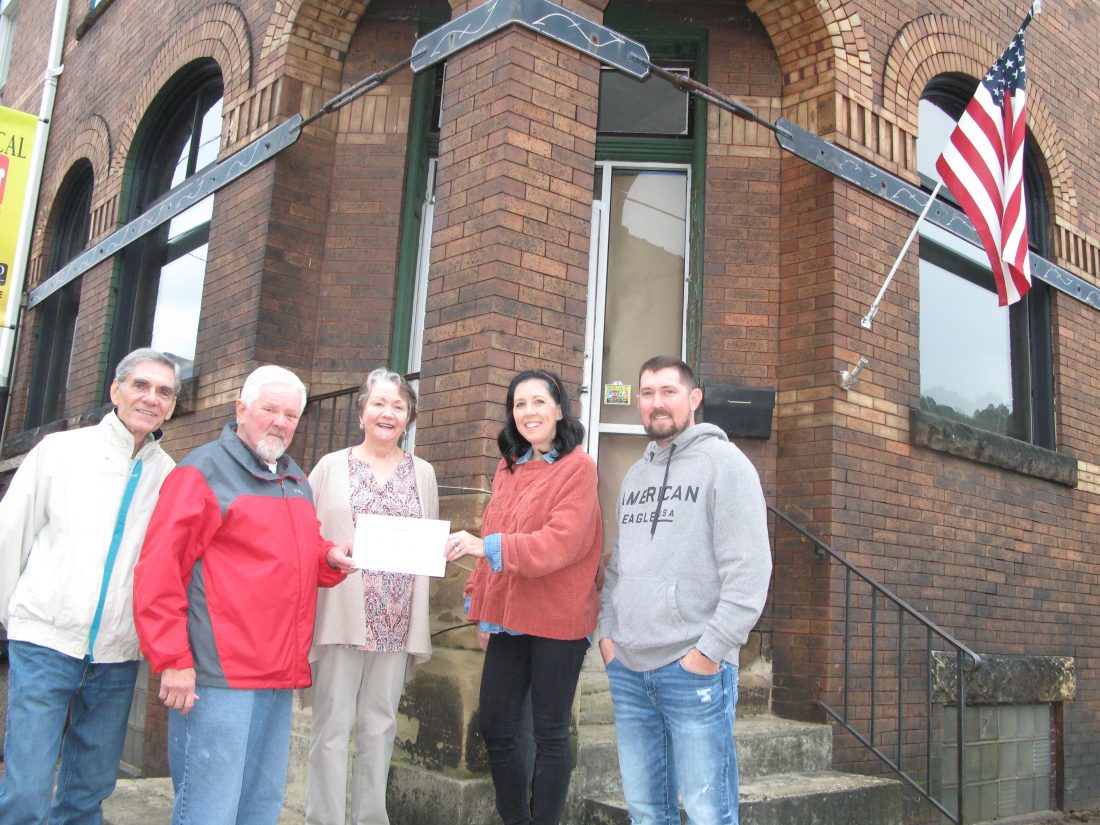 PLANS ARE BREWING — Renovation of a former boarding house at Clarke and North Fourth streets in Toronto for the upcoming Tri B’s coffee shop have received a boost through two grants presented by the Toronto Beautification Committee and Toronto Coalition for Revitalization. On hand for their presentation were, from left, Coalition member Jon Greiner; George Komar, the coalition’s president; Gail Komar, the beautification committee’s vice president; and Abby LeMasters, Tri B’s owner with her husband, Andy. -- Warren Scott

TORONTO — A local couple’s ongoing renovations of a former boarding house for the establishment of a new business have received a boost from two volunteer groups.

Representatives of the Toronto Beautification Committee and Toronto Coalition for Revitalization stopped by the future site of Tri B’s coffee shop to present grants from the two groups in the amounts of $1,000 and $500, respectively.

Owner Abby LeMasters and her husband, Andy, have been working hard to prepare the 126-year-old building at 241 N. Fourth St. for its new purpose and were very grateful for the donations.

George Komar, the coalition’s president, noted the building is best known as the Goucher Hotel for the haunted attraction that was operated there in recent years. But he said the real Goucher Hotel actually stood east of it near railroad tracks that run through the city.

Komar said the two-story building at the corner of North Fourth and Clark streets has served various functions, including a boarding house, apartment building and a bank.

Asked if he found a large vault rumored to exist in the basement, Andy said whatever its fate, it’s not there.

But he added he did find a smaller, corner safe said to be used for night deposits, and while removing deteriorating drywall, some of the building’s original woodwork.

The pair has been working for several months to renovate the building, including replacing windows for the two floors and attic with ones custom-made for their large, arched openings.

Abby said she envisions the coffee shop as a place where people of all ages can gather, with older residents meeting there on mornings and teens hanging out there after school.

“I think this will fill a need. Not just coffee, but a place to gather,” she said.

The pair said assorted tables, chairs and couches will join the 10-foot wooden counter they have brought in to serve as the center of operations.

It is among many “finds” Abby has snagged as a collector and dealer of antiques, many of which will be available for purchase at the coffee shop.

She explained Tri B’s stands for beans and bric-a-brac.

The latter is a Victorian term that has come to encompass a variety of household items with an artistic quality.

Both 2003 graduates of Toronto High School, the two welcomed the opportunity to return home and embark on a business venture together.

Abby sold brewed ice coffee and ice chai tea at the Toronto Art Festival to spread word about the shop, which she hopes to open in January.

“We were busy the whole time. Everybody seemed happy to hear there will be a coffee shop in town,” she said.

In addition to assorted coffees brewed from beans supplied by the 19 Coffee Co. of Pittsburgh, the shop will offer various teas, smoothies and cocoa, she noted.

While manning a booth at the festival, Abby learned many Torontoans would be interested in picking up coffee from her on their way to work, so she’s eyeing hours that would accommodate that.

She added she’s exploring food that could be sold there also.

Employed in human resources for 13 years, Abby said she’s always wanted to run her own business.

The pair also have acquired two other buildings in the same block in hopes of renovating them for new uses.

Komar said he’s been impressed by the research they did before pursuing the coffee shop venture.

It’s not the first time the coalition has aided a local business.

Through its storefront improvement grant program, the volunteer group has provided funds for others to install new windows, purchase a sign and make other exterior enhancements.

Thunder in the Ville returning this weekend in Wintersville

WINTERSVILLE — Volunteers behind Thunder in the Ville are hoping area residents will have a blast when the ...

Four are wounded in incident at Club 106 in Steubenville

The fruit of their field trips