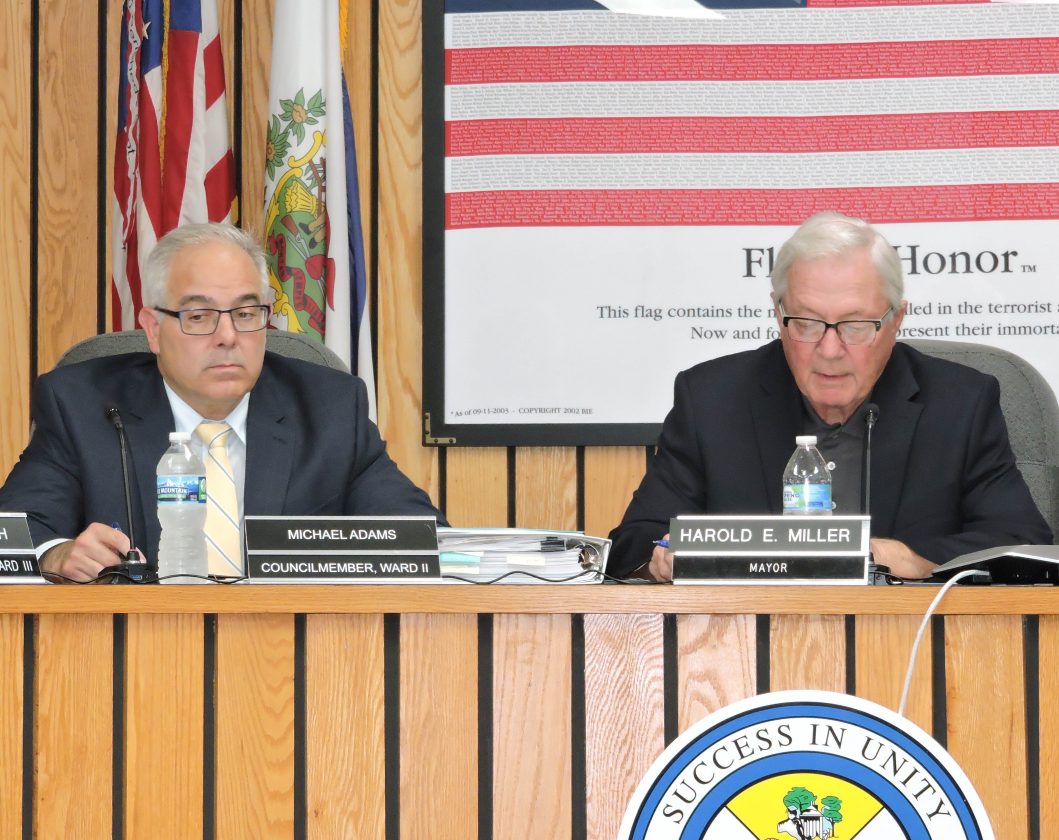 WEIRTON — Members of Weirton Council gave their approval to Mayor Harold Miller’s appointment of a new city manager Monday, but the nomination will now require the filling of a seat on council itself.

By a vote of 6-0, council approved the appointment of Michael Adams to the post Adams currently serves as the Ward 2 representative on council, and recused himself from the vote.

Miller said the city received 26 resumes in its search to fill the position, which has been vacant since the July 12 resignation of Joe DiBartolomeo, and he feels Adams is the right choice for the job.

“Mike is active in our community,” Miller said, noting his service with several area boards and organizations, as well as his work as both an attorney and a pharmacist.

Near the end of the meeting, Adams expressed his appreciation to the remainder of council for their support in his nomination.

“I’m humbled and honored by your support,” Adams said, adding he looks forward to working with all of the officials and staff within the municipality. “I look at this as a great opportunity.”

Adams pointed to several ongoing economic development projects, such as the Park Drive project, the Frontier Crossings plans and the progress at Three Springs Crossing, American Way and the former Kmart building as opportunities for growth in Weirton, adding there have been seven businesses open in the last month and another seven in the process of opening.

“This is a great town. We need to keep things moving,” he said. “I’m very optimistic about the future.”

Adams initially was appointed to council in July 2018, filling an unexpired term, and being elected to a full term in 2019. In addition to his work as an attorney and pharmacist, Adams previously served as Weirton’s municipal judge, has been a state lottery commissioner and a member of the board of directors of the Public Defender Corp. in the First Judicial Circuit. He is a past member of the city’s Planning Commission, a current member of the Weirton Board of Parks and Recreation, and has been active with Weir High athletic booster organizations. He was named Chester city solicitor in 2018, and became an assistant prosecutor for Hancock County earlier this year.

City Attorney Vince Gurrera explained he had contacted the West Virginia Ethics Commission to discuss any conflicts with Adams’ selection, saying he was told not only that there would be no conflict, but that Adams could even continue serving on council while working as city manager. Adams, however, has opted to step down from his elected office.

“He has chosen not to serve as a councilman,” Gurrera said.

Adams will officially take up his new post Oct. 1, with the city accepting applications from Ward 2 residents wishing to serve on council during the next two weeks.

Under the city charter, council has up to six weeks to fill a vacated council seat.

STEUBENVILLE — The city has been awarded $250,000 in grant funds through the Appalachian Regional Commission for ...

NEW MANCHESTER – Area residents looking for some traditional games and entertainment will have such an ...

Part of county Road 6 to be closed STEUBENVILLE — A portion of Jefferson County Road 6 (Mount Pleasant-Adena ...