City residents are asked to make the right call 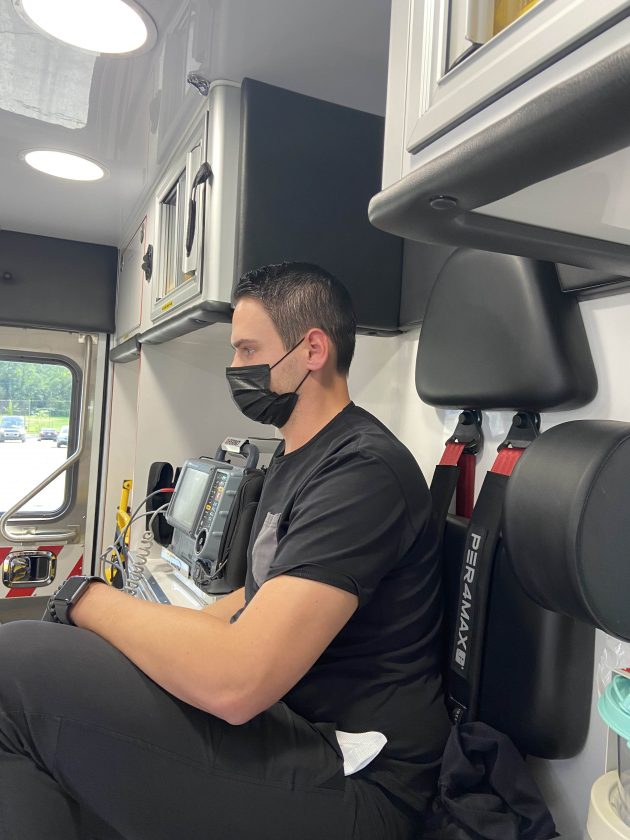 ON ROTATION — Derek Schoppert, a resident physician in the emergency department at Trinity Medical Center West, interacts with a patient while completing an 84-hour rotation with the Steubenville Fire Department ambulance service. -- Contributed

STEUBENVILLE — With the privately owned Ambulance Service transitioning to new ownership, Steubenville Fire Chief Carlo Capaldi said Monday it’s a good time to remind residents that in the event of an emergency, they should be dialing 911 for help.

Capaldi said all 911 calls ring into the Jefferson County Dispatch Center, then are routed to the appropriate provider. Steubenville is now the primary emergency response ambulance service provider within city limits, so those calls would naturally be routed to the department first. In the event his crews are tied up, Capaldi said one of the city’s mutual aid partners would be called in.

“We’re the primary emergency response ambulance provider within the city limits of Steubenville — if someone needs an ambulance for emergencies, they can contact us by calling 911,” Capaldi said. “Or if they need to program something into their phone with a medical alert company or to program into their phone, they can use the Steubenville Fire Department emergency number, (740) 282-3636.”

He said that number rings directly into the Jefferson County Dispatch Center.

A private company recently purchased some of ASI’s assets and is taking over non-emergency transports of patients in long-term care facilities and nursing homes. SFD doesn’t do those kinds of transports.

But routing calls through the Jefferson County Dispatch Center by dialing 911 or the SFD emergency number ensures calls are sent to the appropriate response agency — in Steubenville, the primary emergency response provider would be SFD. Calls routed through the dispatch center are also monitored by professionally trained dispatchers who send additional aid when needed, and if an SFD ambulance is at another emergency call, they can dispatch an engine company to provide aid and care until an ambulance arrives on scene.

“If you are still calling the old ASI number, that does not go to the local dispatch center of the Steubenville Fire Department,” Capaldi said.

Capaldi, meanwhile, pointed out that a year ago, “we didn’t even have an ambulance.”

“We’ve come a long way and we haven’t even hit a year yet,” he said. “Within a year, we now have a second ambulance up and running and it’s running more often.”

He said they also have doctors and students in health care fields doing ride-alongs.

“We have resident physicians from the emergency department at Trinity Health System, a couple of them, completing an 84-hour rotation,” he said. “And we have EMT and paramedic students from Eastern Gateway Community College … doing clinical time with us. They have to respond to a certain number of patients. Since we’re (so busy), they can get done faster because of our call volume. We have a wide variety of emergencies when they ride with us. We have it all.”

“It’s worked out well,” he said. “Thank God we had CARES money, it helped out immensely.The business is definitely there; our people are going non-stop.”

ASI, he said, “for all intents and purposes will be out of business by the end of the month. So, what people need to do is call 911 to get an ambulance. If you’re in Steubenville, naturally those calls will go to us first and if our ambulances are tied up, then it will go to one of our mutual aid partners.

“Call 911, that’s the No. 1 thing. They are the dispatching authority in the county, we all work together. That’s much easier to do than call a specific number you may or may not remember.”