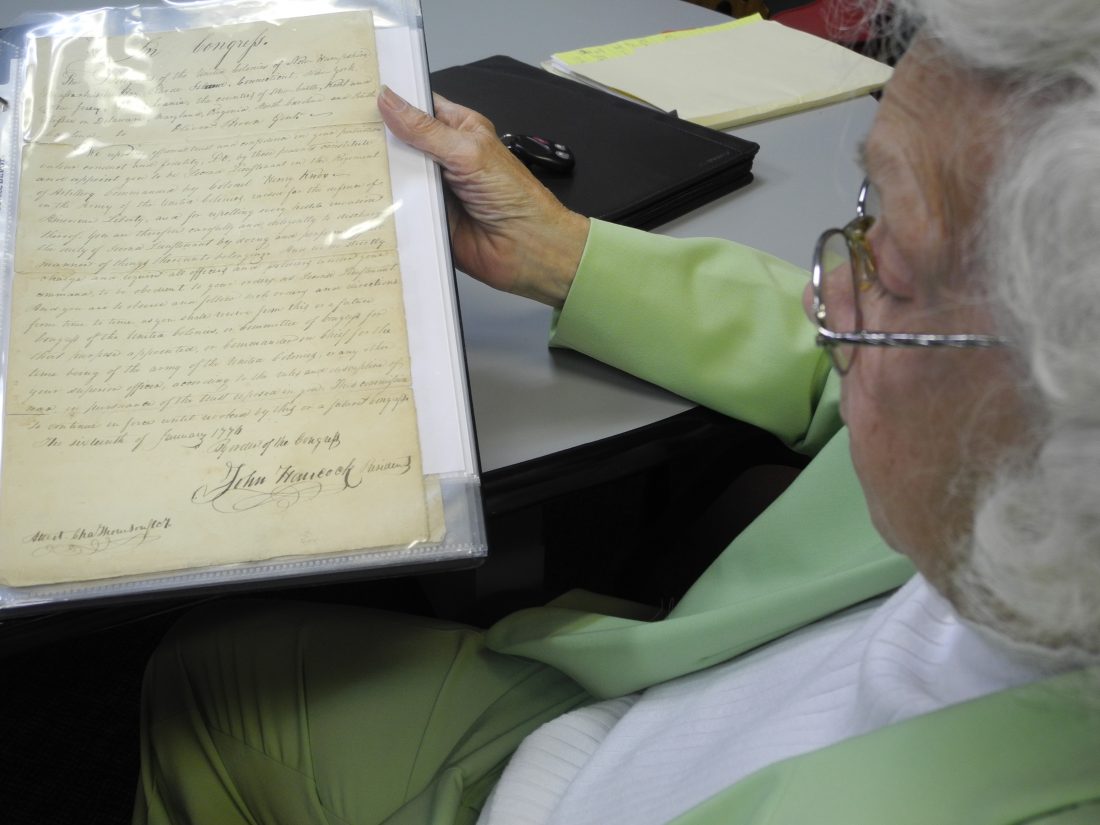 REVOLUTIONARY FIGURE — Ruby Greathouse, volunteer curator of the Brooke County Museum and Cultural Center, holds a letter bearing the famous signature of John Hancock and addressed to Oliver Brown, who settled in Wellsburg after leading troops in many battles of the American Revolution. (Photo by Warren Scott)

WELLSBURG — While the creations of West Virginia and Brooke County were many years away when the American Revolution was being fought, the county later became home to a military leader who fought in many of its battles.

Ruby Greathouse, curator of the Brooke County Museum and Cultural Center, said she and others with the museum were surprised in 2015 to learn that Eleanor Brown Denton, a late California woman, had bequeathed to the museum documents belonging to her great-great-great-grandfather, Oliver Brown, who served as a military leader in the conflict.

A native of Lexington, Mass., Brown is said to have established a farm in the Kings Creek area of Weirton many years later before settling near the future site of state Route 27 in Wellsburg. He is buried at Brooke Cemetery.

The documents include what appear to be two letters signed by John Hancock who, according to legend, signed the Declaration of Independence largely and clearly so it could be read by King George III without his spectacles.

Hancock was president of the Second Continental Congress, a group of colonial leaders who organized the American Revolution in response to unfair taxation and other injustices by the British Parliament and its army.

“There was no United States of America. He was president of these colonies,” said Greathouse.

She noted the first letter to Brown, dated Jan. 16, 1776, refers to nine colonies and three Maryland counties then involved in the revolution while all of Maryland and two more colonies are named in a second letter bearing Hancock’s familiar signature and dated Jan. 1, 1777.

The first letter notified Brown of his appointment as second lieutenant of an artillery regiment of the Army of United Colonies commanded by Col. Henry Knox while expressing “special trust and confidence in your patriotism, valour, conduct and fidelity.”

A former Boston bookstore owner, Knox served as chief artillery officer during the revolution and went on to become the first U.S. secretary of war.

The second letter advises Brown of his promotion to captain lieutenant, a military rank then common in the British Army, of an artillery regiment commanded by Lt. Col. John Crain.

A third letter, dated Dec. 20, 1776, and signed by Knox, instructs Brown to recruit “as many able-bodied men as you can” for the war. It outlines pay for the men, depending on their duties, and states those who serve for the remainder of the war are to be rewarded with 100 acres of land.

Included with the letters were two other documents that appear to be written by Brown himself.

In one dated February 1815, Brown appears to be recounting his military background in an appeal for a government pension. In the other, dated May 1, 1845, Brown again recalls his military service though the reason is unclear.

Since Brown died the following year, at the age of 95, it may have been an attempt to put down for posterity his role in the revolution.

In it he states that having lived nearby, “I was present at the Boston Tea Party, a looker on only.”

But historians have noted Brown led a group of about 40 soldiers and sailors in using rope to capsize a lead statue that stood 15 feet tall and depicted King George III astride a horse, from its marble pedestal in New York City on July 9, 1776.

It’s said metal from the statue was used later to produce musket balls for the troops.

The move received a reprimand from then Gen. George Washington, who said such actions should be taken by the proper authorities, and Brown is said to have regretted it.

Writings by the Rev. Joseph Doddridge, a local pastor and historian, and others also reveal Brown’s involvement in many battles, from the battle at Lexington that launched the war, to the Battle of Monmouth, the last attempt by the British to control Philadelphia in 1778.

In his writings, Brown acknowledged victories, including the Battle of Harlem Heights, and defeats such as the Battle at White Plains.

He recalled defeating the British at Bunker Hill in Massachusetts where he “lost 15 men kild or wounded” and fighting them at Brandywine Creek, Pa., until sundown when “our army drove the British into Germantown where the British took shelter in an old stone house.”

Following the revolution, Brown served in the militia during the Indian Wars.

He and his wife, Abigail, brought to Wellsburg with them seven children who were born in Massachusetts and bore four more after they arrived.

Greathouse said Bobbie Elliott, a volunteer with the museum, transcribed the letters, which were faded and penned in a cursive writing style not unusual for the period but strange to modern eyes.

The originals are kept in acid-free plastic folders and away from light that can further damage them.

But visitors to the museum will find in its War Room an Episcopal prayer book, containing books of the New Testament, and said to have been carried by Brown during his military service.

Greathouse said the palm-sized book was donated to the museum before she was its curator and she has no information about its origin.

Brown’s grave also can be found at the lower end of Brooke Cemetery. His epitaph notes the many battles in which he served.