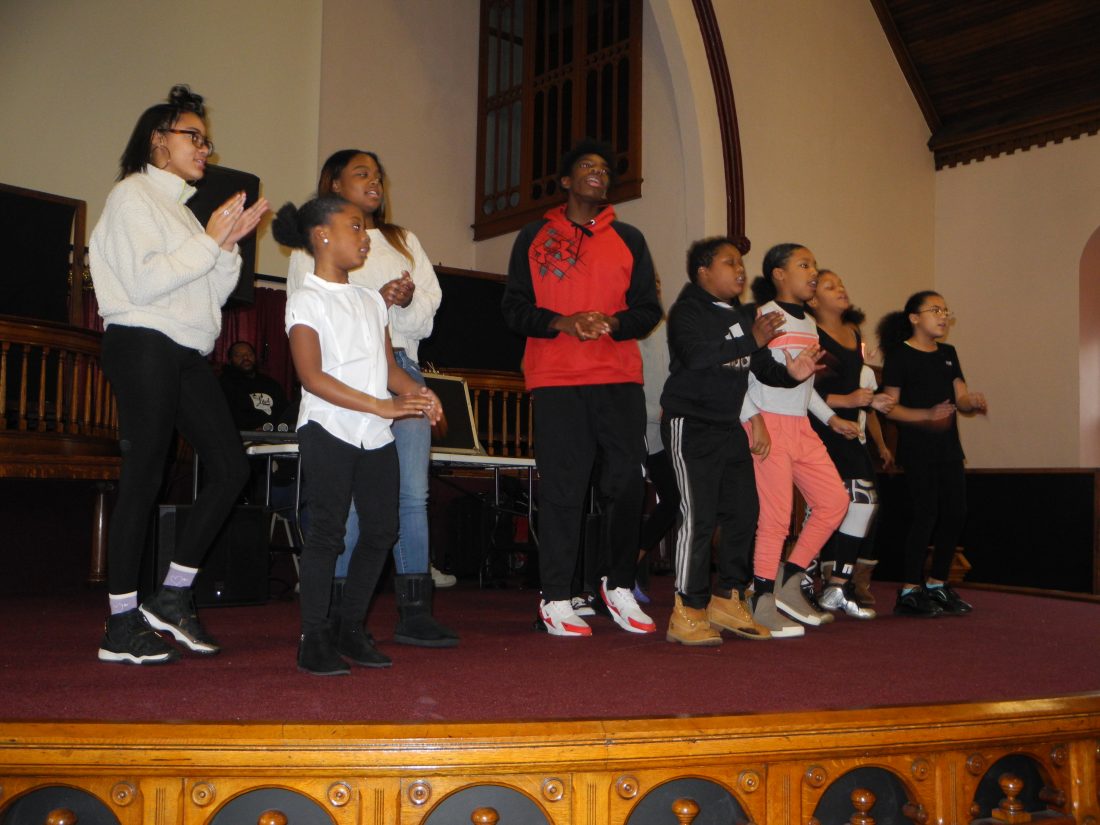 JOYOUS SOUND — The Steubenville Community Youth Choir performs upbeat Christian music during a program of entertainment and reflection on the life of the Rev. Martin Luther King Jr. Saturday at the Sycamore Youth Center. (Photo by Warren Scott)

STEUBENVILLE — Youth have been playing a big part in the Dr. Martin Luther King Jr. Association’s weekend-long observance of Martin Luther King Day, as organizers strive to convey the civil rights leader’s principles to them while also recruiting them to pass his message on to others.

On Saturday at the Sycamore Youth Center, paid tribute to King through song and dance, while Steve Forte, director of the Fishers Council — a local civic group — reflected on the Christian principles that guided the slain civil rights leader.

Forte said King, a Baptist minister, was driven by the teachings of Jesus Christ when he adopted and promoted a nonviolent stance while lobbying for equal rights for all races.

Forte addressed an audience of all ages during a break in a morning of entertainment at the Sycamore Youth Center Saturday.

He noted prior to the civil rights movement, whites and blacks could not use the same water fountains, restrooms and restaurants, a fact that can be difficult for younger generations to understand today.

Forte said King set out to change things but in deciding how to do that, asked himself what Jesus would do.

Blacks and others in marches promoting equality often encountered violence but King encouraged them not to fight back, following the example of Christ, who “forgave the men who killed him while they were killing him.”

Forte said King “has been called a light in those dark times but really he was a reflection of Christ,” who “taught us to return love for hate.”

He shared stories of victims of violence who were able to find peace and forgiveness toward their attackers through Christianity.

Forte noted following Amber Guyger’s sentencing for the shooting death of Botham Jean, a man she mistakenly believed had broken into her apartment, the victim’s brother, Brandt, hugged and forgave her.

“Can you be more powerful than the person you’re in conflict with, the system in which you find conflict? The answer is yes, through Jesus Christ,” he said.

“How wonderful would it be to be in a confrontation with someone and through that confrontation, that person finds Christ?” Forte said.

Organized by Cynthia Lytle and the Rev. Bobbyjon Bauman, entertainment was provided by many youth, including the AKC Dance Team, CBE 180, Minister of Truth, Elisha Fletcher, the Ambassador Mime Team and Steubenville Community Youth Choir.

“There’s so much talent and so much gifting from the young people in this community, and when they a platform to display that, it’s always a treat,” said Lytle.

Prior to the program, she played an excerpt from a King speech in which he said everyone has an opportunity to become great by serving others.

“We believe that instead of looking at it as day off, that Dr. King would see it as a day on,” she said.

Following the program, many youth and adults walked over to the Steubenville Urban Mission’s Unity Kitchen to serve lunch to visitors there.

“As excited as I was to see them perform, I was even more excited to see them serve,” Lytle said.

Forte also met Saturday afternoon with young black men enrolled in the Fisher Council’s 2020 Male Initiative, a mentoring program aimed at helping them to be productive and active community members.

The weekend-long observance will continue with an ecumenical service at 6 p.m. today at Finley United Methodist Church on Lincoln Avenue, a free continental breakfast with comments from the Rev. Marshall D. Madeconia and others; and a memorial march at 10 a.m. Monday from the Martin Luther King Recreation Center on Market Street to Steubenville High School, where winners of the MLK Association’s essay contest will be recognized.