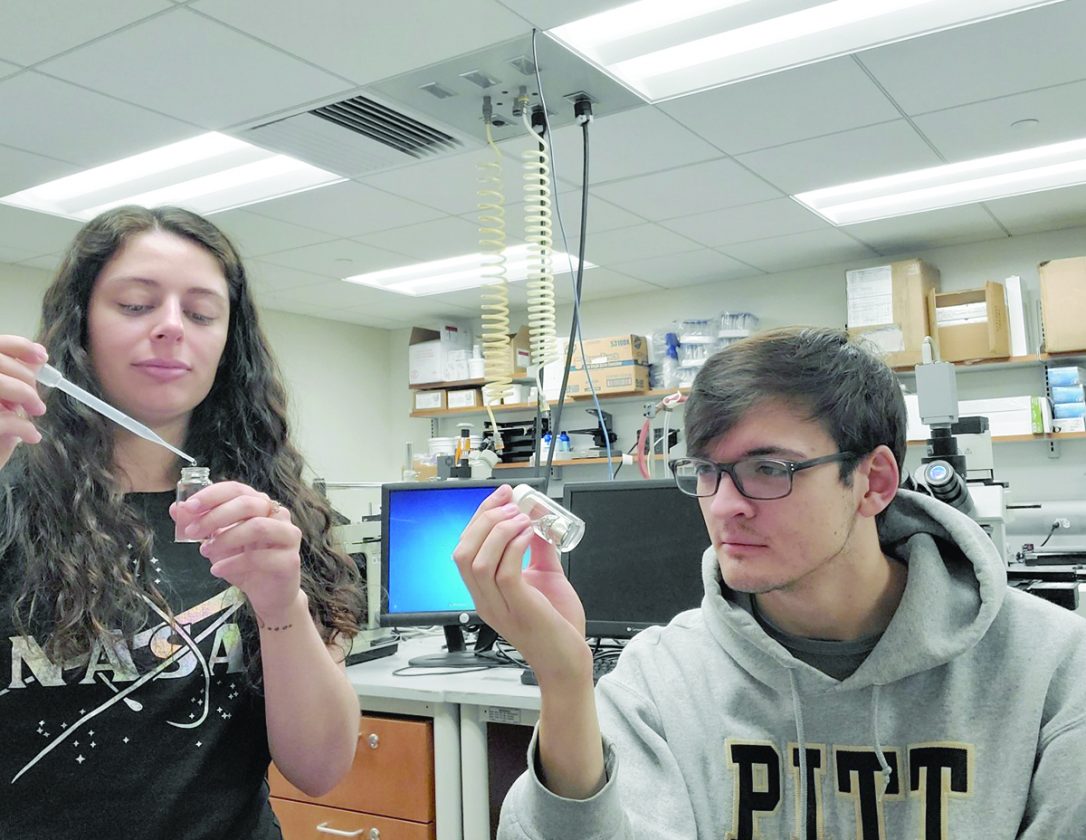 FOCUS — Marissa DeFallo, a 2015 graduate of Indian Creek High School and a current mechanical engineering student at the University of Pittsburgh, performs an experiment with partner Nik Vostal. DeFallo and Vostal had their aluminum corrosion experiment selected for inclusion on the International Space Station this summer as part of the Student Spaceflight Experiments Program Mission 14. -- Contributed

WINTERSVILLE — Inspirational author Norman Vincent Peale once wrote, “Shoot for the moon. Even if you miss, you’ll land among the stars.”

But Marissa DeFallo, a 2015 graduate of Indian Creek High School, is taking that statement literally as she sets her sights upon the final frontier. DeFallo, the daughter of Laurie Nichols of Toronto and Rich DeFallo of Pittsburgh, is a junior mechanical engineering major at the University of Pittsburgh with a focus on aerospace and will have her project included among others from around the world on the International Space Station this summer.

She and partner Nik Vostal, a material science major, were one of two experiments selected as part of Student Spaceflight Experiments Program Mission 14. SSEP was launched in 2010 by the National Center for Earth and Space Science Foundation in strategic partnership with NanoRacks, LLC and is a national STEM education initiative that gives about 300 students the ability to design and propose real experiments to fly in low Earth orbit, first aboard the final flights of the space shuttle and then on the ISS. Pitt obtained a grant to conduct a contest in partnership between the engineering and pharmacy schools.

“I’ve always wanted to work with NASA or SpaceX and I’ve always wanted to build satellites or rockets,” she said. “Pitt received a grant and has a contest where two experiments could go on the space station. We could submit our experiment ideas and they go under review. They have to meet strict requirements.”

DeFallo and Vostal’s submission involves the rate of corrosion of aluminum foil to indicate the sustainability of materials used on rockets in space.

“It would see how aluminum foil corrodes in water and we’ll 3-D print aluminum and make smooth and rough surfaces,” she explained. “We’ll see how the topographies affect corrosion.”

The goal is to only have the unique surface corrode and not the aluminum itself, thereby maintaining a sound structure. Aluminum is commonly used because of its light weight, durability and strength and is found on engines and the outer portions of airplanes, rockets and the space station itself.

DeFallo learned the good news in December that the project will be among 30 worldwide to undergo testing onboard the ISS through NASA. She said the experiment will be refined before it heads into space and she will be at Cape Canaveral, Fla., for the official launch around June.

She was inspired by her experience as an intern with American Airlines since one of her tasks was performing maintenance.

“I have to do yearly training modules and one is on aluminum corrosion. I was doing this training as we were thinking about experiments and thought about the aerospace application,” DeFallo recalled. “I’ve always been interested in space and would watch the science channel. I’ve always had a love for space.”

She also remembers investing in academics at ICHS and counted math teacher and coach Joe Dunlevy among her mentors.

“He was a very practical person and you learned everything yourself. I really liked that way of learning because it gave me time to figure it out at a higher level.”

Dunlevy praised his former pupil, saying she showed all of the elements of being successful while under his tutelage. She was a student for three years of honors math, including AP calculus, and he reflected upon her abilities to learn.

“She was a great student, a great person above all and a great athlete, and you know a student like that is going to do something special down the road. It’s not hard to imagine her doing a lot of great things. We’re just so proud of her and all of our former students for the things they’ve done. She’s one of the best.”

Dunlevy continued that her ability to study, play multiple sports and participate in myriad organizations were signs of her keen ability to manage time and strong work ethic.

“Nothing she would do surprises me. Well, maybe a little bit,” he said. “The sky’s the limit.”

DeFallo said Dunlevy’s methods have assisted her in her college career and she has continued that momentum through her internship, which included working in Tulsa, Okla., with component and composite engineering. Her work entailed analyzing broken parts and helping mechanics repair them, plus she updated manuals on how to fix the parts. Currently, she works in Pittsburgh with the Airworthiness Directive Group.

She also hopes the experiment will put her on course to fulfill her longtime dream.

“I’m super excited and I hope this will lead me into a career in aerospace engineering,” she said. “I dream big.” 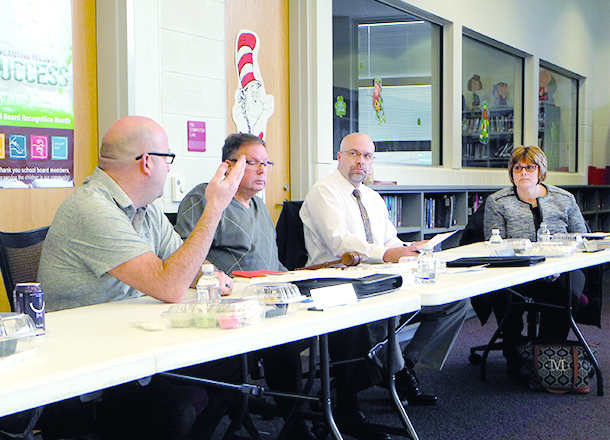 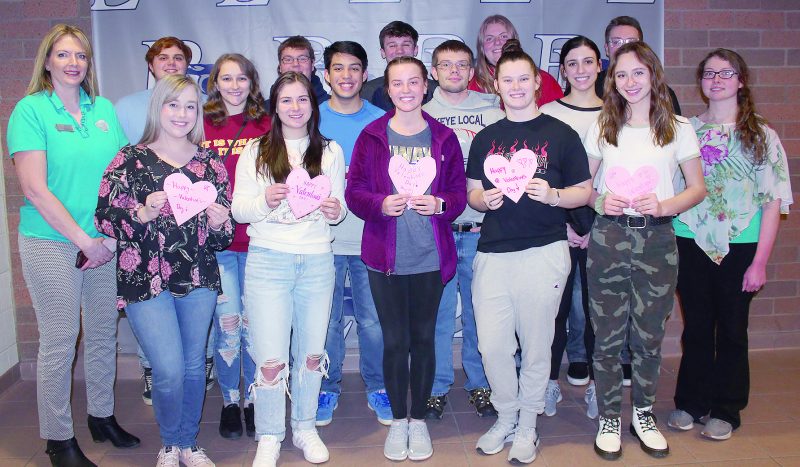 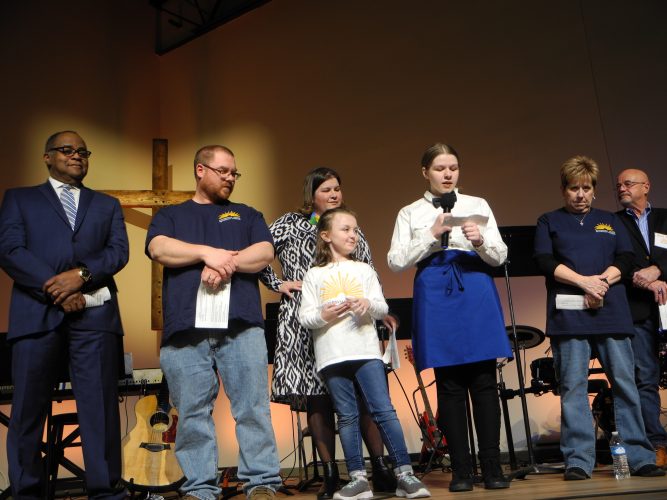 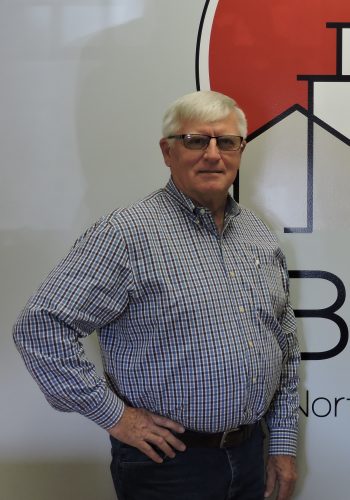