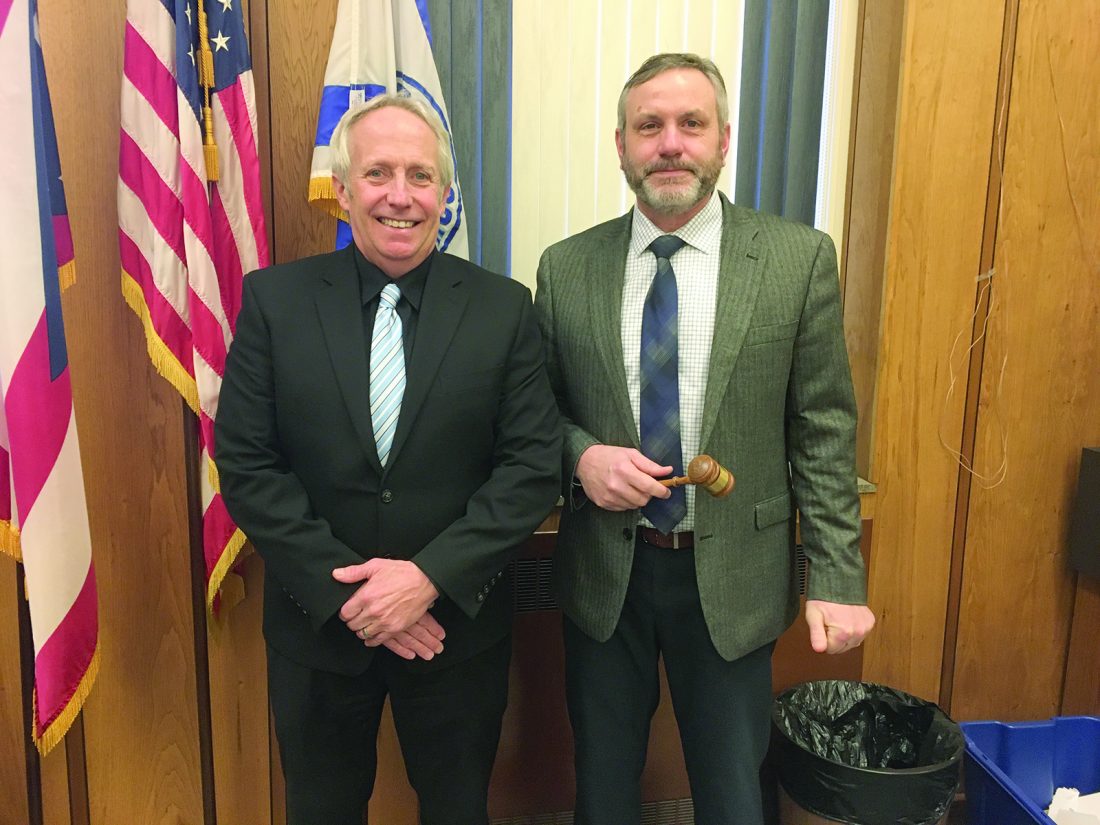 NEW CHAIRMAN — The Jefferson County commissioners on Monday held a reorganization meeting, with David Maple, right, being selected as chairman for the year. Thomas Graham was elected vice chairman. Commissioner Tom Gentile was absent from the meeting. -- Mark Law

STEUBENVILLE — The Jefferson County commissioners held a reorganization meeting on Monday, with David Maple being elected chairman for the year and Thomas Graham being named as vice chairman.

Commissioners will continue to hold the weekly meeting at 9 a.m. on Thursday in the courthouse.

Commissioner Tom Gentile was absent from the meeting.

Maple thanked Gentile for being the chairman in 2019.

“There were a lot of moving levers last year, and he kept it going. It was a difficult task,” Maple said of Gentile’s leadership.

Maple and Graham discussed the work on the budget for the year, commenting on how the carryover amount was not as big as projected.

The county last year spent $17 million in its general fund budget. Revenue is expected to be around $17.3 million. But department heads are asking for budgets totaling $18.4 million, leaving the commissioners with the task of cutting a little more than $1 million from the budget requests.

Maple said he wasn’t surprised by the carryover amount.

“There is not as much to spend, and it will be a challenge for some departments,” he said.

Maple said he has said that county government shouldn’t cost more than $15 million, but he said the extra payday this year will cost a significant amount of money.

Maple said other challenges in 2020 include the $11.4 million Amsterdam sewer project and the proposed reopening of the Crossridge landfill.

“It will take a team effort this year,” he said.

Graham said he has seen both rough and good years with the budget, but he added there will have to be some significant cuts to the budget requests.

“But I have no doubt we will be able to accomplish it. We run the county like a business. We will have a balanced budget,” he said.

Graham will be the representative to the County Commissioners Association of Ohio; Gentile will serve on the GIS board; and Maple will represent the commissioners on the data processing board.

The chairman of the commissioners automatically is the representative on the Jefferson-Belmont solid waste authority. Maple said his appointed representative will be Joe Luckino, owner of Cedar One Realty of Wintersville.

Graham will be the representative on the county health insurance committee, a task he has done for more than a decade.