Franciscan University of Steubenville partners with Catholic university in Iraq 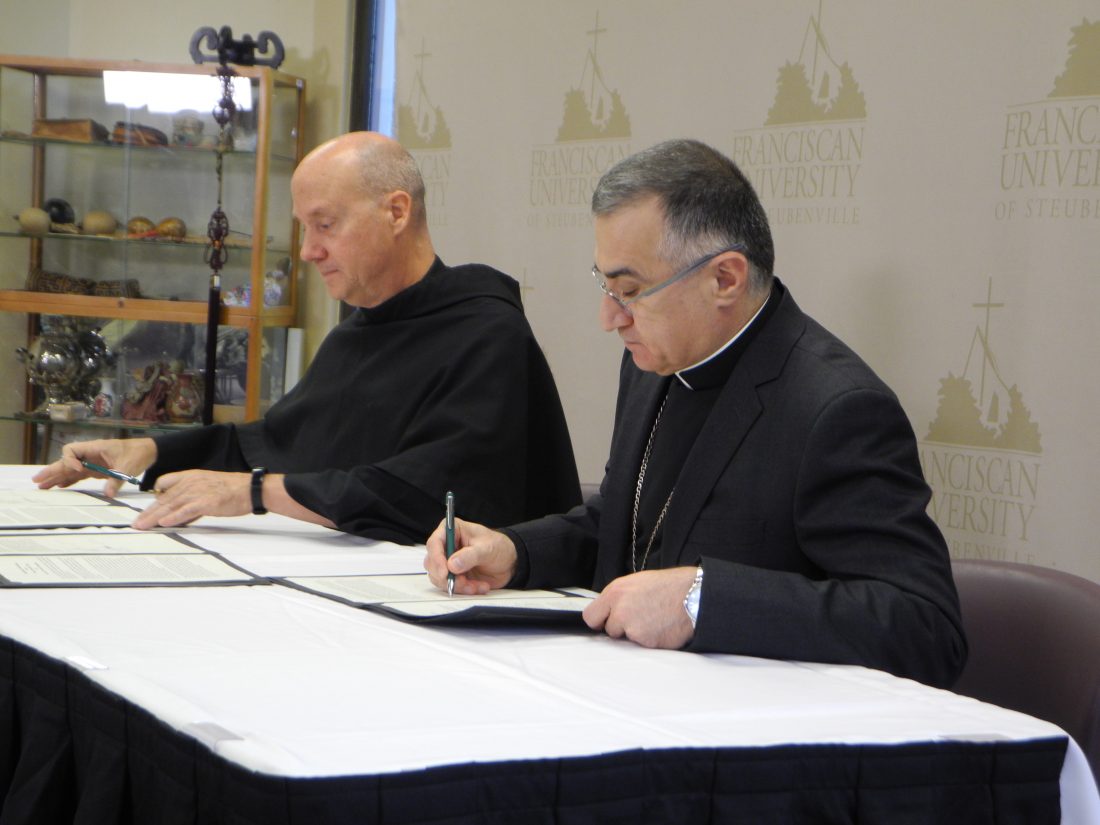 A NEW PARTNERSHIP — On Friday, the Rev. Dave Pivonka, TOR, president of Franciscan University of Steubenville, left, and the Rev. Bashar Warda, archbishop of Erbil, Iraq, signed a memorandum of understanding forming a partnership through which educational opportunities can be offered to students at the Catholic University of Erbil founded by Warda and the local university. (Photo by Warren Scott)

STEUBENVILLE — The leaders of Franciscan University of Steubenville and the Catholic University of Erbil in Iraq have teamed to present new opportunities for education and understanding of the two diverse cultures.

While signing a memorandum of understanding between the two schools, the Rev. Dave Pivonka, TOR, president of the local university, and the Rev. Bashar Warda, archbishop of Erbil, made it clear a common faith has brought the schools together.

The two said the agreement formalizes a partnership in which students from Iraq can receive scholarships to complete courses at Steubenville, in person or online, and Franciscan students can visit the northern Kurdistan region of Iraq, which dates to the 5th millennium B.C. and is one of the oldest continuously inhabited areas in the world.

Its residents include about 4,300 Chaldean Christians whose religious roots can be traced to the 16th and 17th centuries, with about another 3,000 Christians who came from other regions to escape persecution by Islamic State militants, said Warda.

Pivonka acknowledged many Americans could be surprised to learn there are Christians in Iraq.

“Largely the Christians in Iraq have been forgotten. But they have much to offer us,” he said.

“We talk about inconveniences in our faith. But in Iraq there are people who are dying for it. All of the (Iraqi) youth here have family members who have been killed. It’s just part of their faith,” Pivonka said.

Warda noted many Christians fled Iraq when ISIS forces attacked in 2014, leaving their homes and most of their possessions to be burned by the terrorist group.

But, the Kurdistan region has since become a safe haven for Christians, with Warda and others establishing shelters, health care clinics and other services for refugees. A need for higher education led Warda to found the Catholic University of Erbil in 2015.

“With the university we wanted to offer a family friendly environment for students where they would feel the presence of God through that trouble with ISIS,” he said.

But Warda added the university’s 143 students come from various faiths and are enrolled in 10 programs, including accounting and other business programs, law and international relations, pharmacy technology and other sciences.

Daniel Kempton, vice president of academic affairs and a political science professor at Franciscan University, said refugees at the university include Iraqi women who had been kidnapped to serve as “brides” of ISIS soldiers and children produced by those forced unions.

“They had nowhere else to turn,” he said.

“The name is Catholic University but they wanted to spread the word of love,” said Hala Warda, who added the school promotes acceptance of various religious and ethnic backgrounds.

Warda earned a master’s of business administration from Franciscan University after she and her family fled from Iraq four years ago. She explained she is not related to the archbishop, as Warda is a common name in Iraq.

Though her family has relocated to San Diego, Warda said she plans to return to Iraq to teach.

“This was my plan from the first because really they need someone to help them,” said Warda, who is enrolled in Franciscan’s Catholic leadership program.

In its first year, the program’s online participants include a nun in Ireland as well as others in Iraq, said Tiffany Bourey, its director.

Bourey said seeds for the partnership with the Iraq university were planted with the establishment of scholarships for Iraqi students at Franciscan in cooperation with Aid to the Church in Need USA.

The international Catholic organization has been a strong supporter of C.U.E. and has provided funding for two computer labs serving the school’s architectural and civil engineering students.