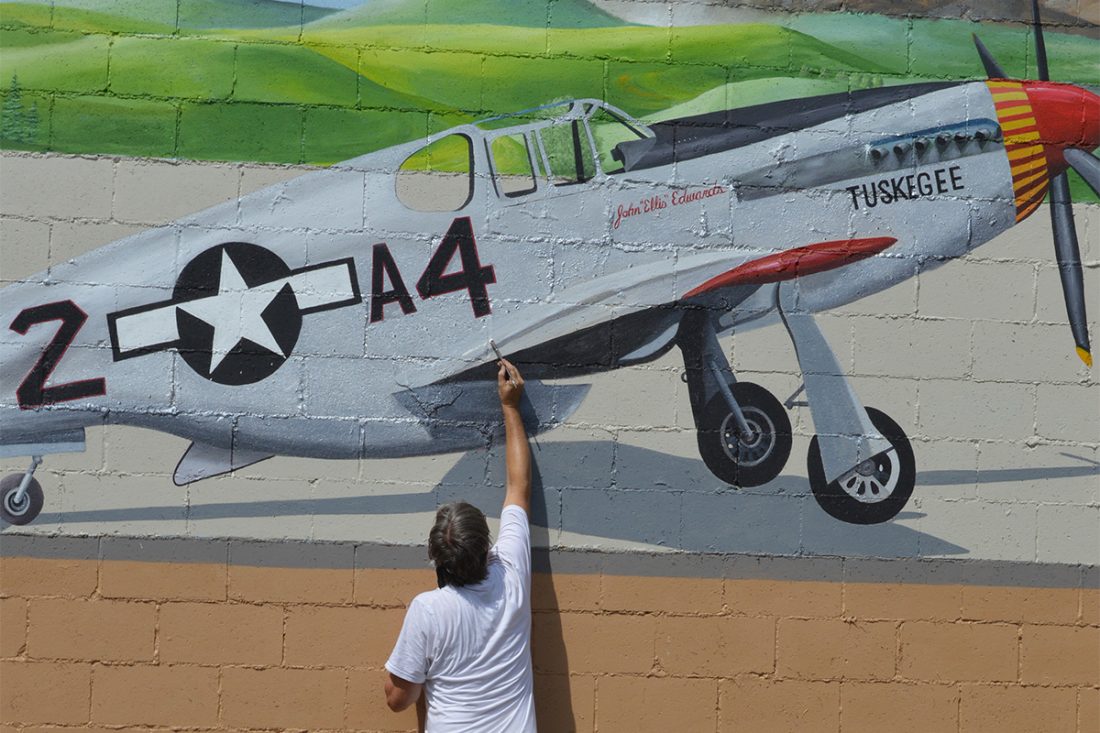 FINISHING TOUCHES — Artist Rusty Baker adds detail to his Tuskegee Airmen mural, which features Steubenville brothers Jerome and John “Ellis” Edwards and eight planes. Jerome Edwards was killed in 1943 when the P-51 he was piloting crashed on takeoff, but his younger brother went on to earn the Distinguished Flying Cross after single-handedly shooting down two Messerschmitts. (Photo by Linda Harris)

STEUBENVILLE — Caroline Edwards was in high school before she realized the significance of what her grandfather, Jerome, and his kid brother, John “Ellis” Edwards accomplished decades ago.

The Edwards brothers, the subjects of Steubenville’s newest mural, graduated from Big Red and enrolled at West Virgina State College — Jermone in 1935, John in 1937.

While John had wanted to study dentistry, the Commemorative Air Force Tuskegee Airmen Red Tail Squadron says Jerome had his eye on a bigger prize for the two of them — piloting planes.

They signed up for the aviation program at WVSC, one of the first historically black colleges to participate in FDR’s Civilian Pilot Training Program. CAF says the program was designed to not only boost the nation’s defenses, but also made it possible for individuals who historically would not have had the opportunity to train as pilots.

Once they finished CPT, cadets were sent to advanced flight training with the Army Air Corps. In those days of segregation, black candidates were assigned to the Tuskegee Institute

After graduating from WVSC in 1940, Jerome completed his advanced flight training at Tuskegee and was commissioned a 2nd lieutenant in September 1942. He was killed May 7, 1943 when the P-40 he was piloting crashed on takeoff.

“My grandma said he was so insistent on flying his own plane, he didn’t want anyone to test his plane,” Caroline Edwards said. “He wanted to test it himself. He took off and it malfunctioned.

“Years ago I was writing a report, and I remember reading an excerpt about how when my grandfather passed they wouldn’t service his body (there). They had to transport his body back here (to Steubenville) to service it. I don’t know why, with all the stories you could possibly hear, but that’s the one I remember.”

John Edwards could have taken a family hardship discharge but opted to stay in the service, earning his commission as a 2nd lieutenant in August 1944. A few months later he was at Ramitelli Air Force Base in Italy, where he flew combat and bomber escort missions with 12th and 15th Air Forces.

While serving as the squadron section leader on a bombing and strafing mission over Nazi-held territory on May 1, 1945, CAF said the Tuskegee Airmen shot down 12 German planes: John “Ellis,” piloting a much slower aircraft, single-handledly shot down two German Messerschmitts, earning himself the Distinguished Flying Cross.

“Hitler’s jet was supposed to win the war for (the Germans) and these guys shot them down,” said Artist Claude Ruston “Rusty” Baker, currently putting the final touches to the Tuskegee Airmen mural on Washington Street between Fourth and Fifth. “That’s how good they were.”

The mural depicts the Edwards brothers striding across the air strip in Italy, preparing to go into battle. Baker worked eight planes into the design, including a P-51 and a B-17 heavy bomber. He worked a B-24 into the design at the last minute because a historian reading the squadron logs realized that’s what Edwards’ unit was escorting on that mission.

“Sometimes (details) are personal preference, but with this kind of mural everything has to be dead-on,” Baker said, adding townspeople seem excited by the mural — some of them even coming down every day to film the progress he’s making. He said progress has been slow at times, pointing out prepping the wall involved chipping cement extrusions off the wall and patching. He’s also had to pull weeds that had attached themselves to the bricks.

The mural dedication is set for Sept. 29, and Mayor Jerry Barilla said he will ask City Council to proclaim it “Tuskegee Red Tail Air Day.”

Barilla said he’s “elated” that the Edwards brothers’ accomplishments are being memorialized.

“Remember, those two young men went to college in the 40s, when hardly anybody, black or white, went to college,” he said. “They went to West Virginia State College, got their degrees and went on to be pilots. Like all pilots fighting in the war, they put their lives on the line.”

While they were fighting the enemy abroad, he said the brothers were also “fighting the war of discrimination” on the homefront, “yet they put their lives on the line for their nation, its principals and values and way of life.”

Caroline Edwards remembers her grandma telling her stories about Jerome and John Ellis.

“She would tell me, ‘Your granddad is somebody. You don’t realize it now, but you will.’ My son was the first boy born on my grandma’s side in generations, so my mom insisted on naming him Jerome Ellis Edwards — he has both their names, my grandfather’s and my uncle’s. I was going to name him something else, but my mom insisted.”

She said she’s tried to teach her son the significance of his name. “He’s younger,” she said. “I think he gets it, but I’m not sure.”

In addition to the Distinguished Flying Cross, John Edwards would also receive Air Medals with Oak Leaf Clusters and, as part of the 332nd Fighter Group, a Presidential Unit citation for the combat skills of its pilots. CAF said Edwards, who died in 1979, went on to fly multiple combat missions in a F86 Sabre Jet during the Korean War. After leaving the military he worked as a radio announcer. 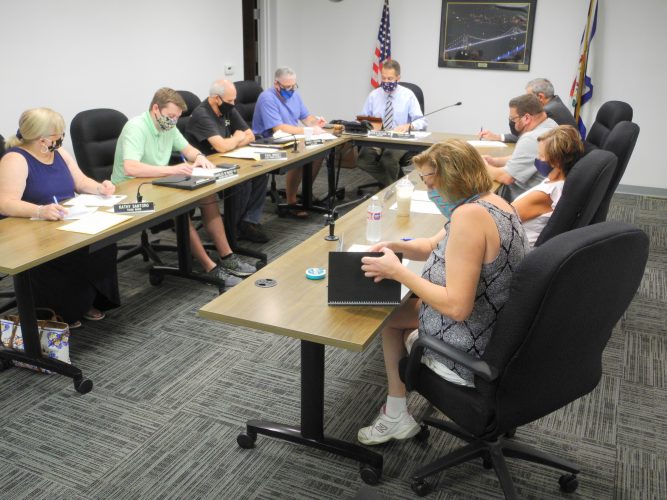 HAMMONDSVILLE — Edison Local School District officials have crafted a plan for reopening schools in the wake of ... 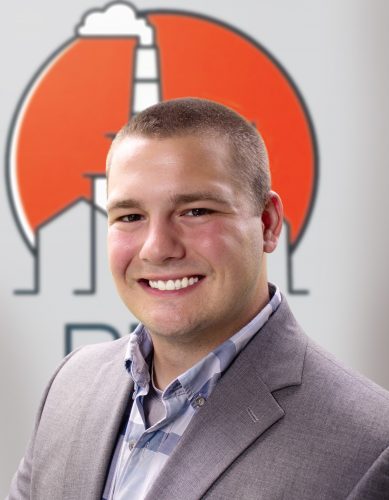 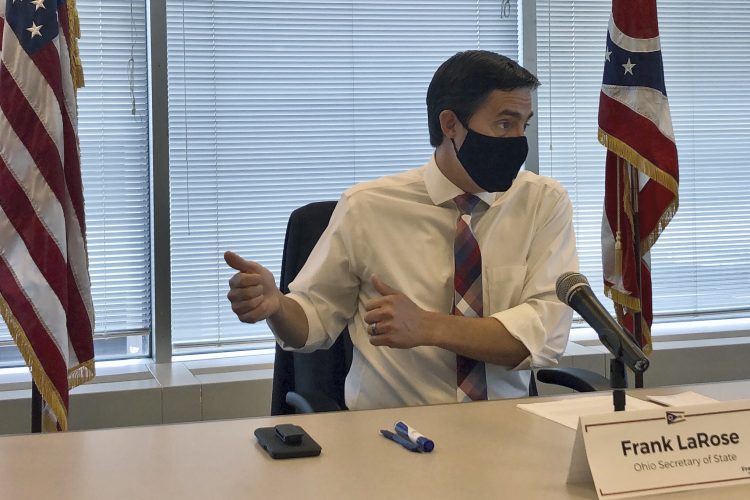